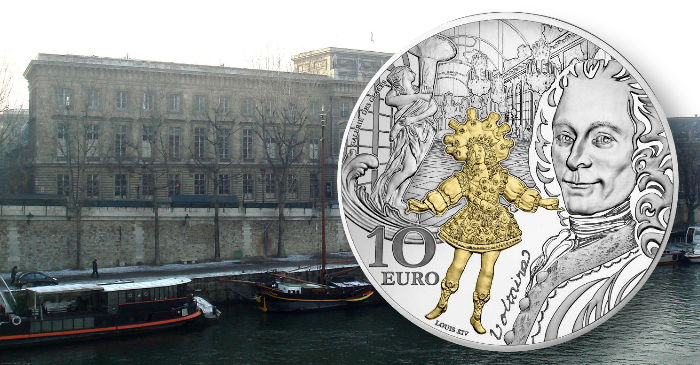 The Monnaie de Paris has issued their latest coins which are part of the overall and multi-national issue of coins focusing on the various eras and chapters in European design. The series “The Ages of Europe,” which began in 2016, is inspired by the seven current bank note denominations of the euro currency — each representing seven distinct timelines of design and style that had become prevalent on the European continent in their day. The age of Baroque to Rococo was a popular style of architecture during the 17th to mid-18th century. Baroque can be defined as essentially a style discipline with the dramatic and the illusory, vivid colours, and hidden light sources which made use of luxurious materials and elaborate, contrasting surface textures which were successfully used to heighten closeness and sensual delight.

17th-century Baroque churches and palaces were extensively constructed to enhance the power, order, and wealth of the state with directionality, movement, and its sheer elaborate detail to design and focus of the subject at hand. Baroque space and style actually was meant to invite participation and provided multiple changing views, whereas Renaissance style was passive and invited contemplation of its precise symmetry. The style of Baroque rapidly developed into two separate forms which became distinct between strongly Roman Catholic countries such as Italy, Spain, Portugal, Flanders, Bohemia, southern Germany, Austria, and Poland, who tended towards freer and more active architectural forms and surfaces. In contrast, Protestant regions such as England, the Netherlands, and the remainder of northern Europe possessed architecture that was more restrained and held a more developed, sober, and quiet monumentality that was impressive in its refinement.

The coins are produced in both gold and silver and share the same designs across the range and options. The reverse evokes the Baroque and Rococo eras perfectly in France, which are represented through three main elements: The Hall of Mirrors, the Rococo element of the Palace of Versailles, and the philosopher Voltaire with the Dancing King — representing Louis XIV in a dancer’s suit with selective gold plating to enhance the Sun King.

The obverse, which is common to the entire Europa Star series, includes the era of the featured age. In this case, it features EUROPE BAROQUE & ROCOCO, along with the year of issue, and country REPUBLIQUE FRANCAISE.

Each coin option is available as separate purchases and is presented in specific varieties according to its size and metal. The 2016 series was dedicated to the age of modern 20th-century art (€500) with the 2017 series highlighting the age of glass and steel (€200). The 2018 series is representative of Baroque art (€100). It is expected that seven other countries within the euro-zone will participate in the third issue of the “Ages of Europe” and include Belgium, Finland, Greece, Malta, Portugal, Spain, and Italy. For additional information about these and other coins available from the Monnaie de Paris, please visit their website.