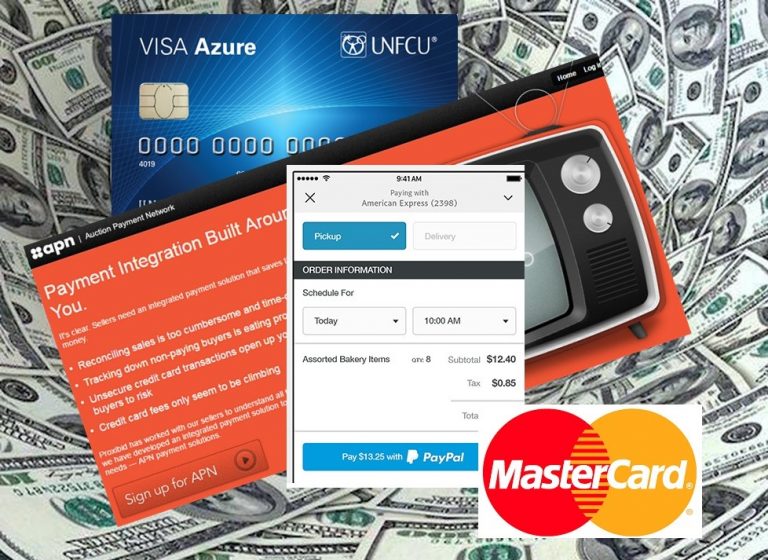 Earlier this year I wrote an investigative analysis titled “The Volatile State of Online Estate Auctions,” noting how tardy technological upgrades in addition to fees from auction portals and credit card companies—often combined with building rent and/or upkeep of onsite facilities—continued to push buyer premiums ever higher.

Shipping has always been an issue with auction houses. Some use third-party shippers. Some do not ship at all.. And a few charge high shipping fees..

These costs were passed to bidders, I noted. At first, auctioneers with onsite clientele did not charge local buyers any fees. Then many had to do so because of rising technology costs. Online buyer fees averaged about 10–15% six years ago and have gradually risen to 18%, 20%, and as high as 23%.

I observed that auctioneers were struggling to make ends meet and that they could pass costs to bidders until a tipping point had been reached.

This followup shows the results of that potential tipping point, comparing realized prices (hammer plus BP) of recent sales on HiBid.com, Proxibid, and eBay with those of GreatCollections, chosen because of the frequency of its online auctions that only sell coins slabbed by top holdering companies, such as PCGS, NGC, ANACS, and ICG.

It also is a warning to online portals to lower costs of auctioneers, to keep buyer premiums low. Sooner or later, aggressive big-house online auction companies are going to feature better buys in coins slabbed by top holdering companies.

For comparison purposes I am using my favorite sellers on HiBid.com and Proxibid and not ones charging fees above 20%. Here is the bid history on a similar coin at MS-63 on HiBid: You can see that the GreatCollections coin at higher grade sold for $10 less.

Proxibid sales of similar coins fared worse in this comparison. While no 1883-CC GSA PCGS-graded coin in large holder sold there recently, a raw GSA 1883-CC with no box or certificate of authentication at a grade of about MS-63 sold for the same bid money with higher BP: 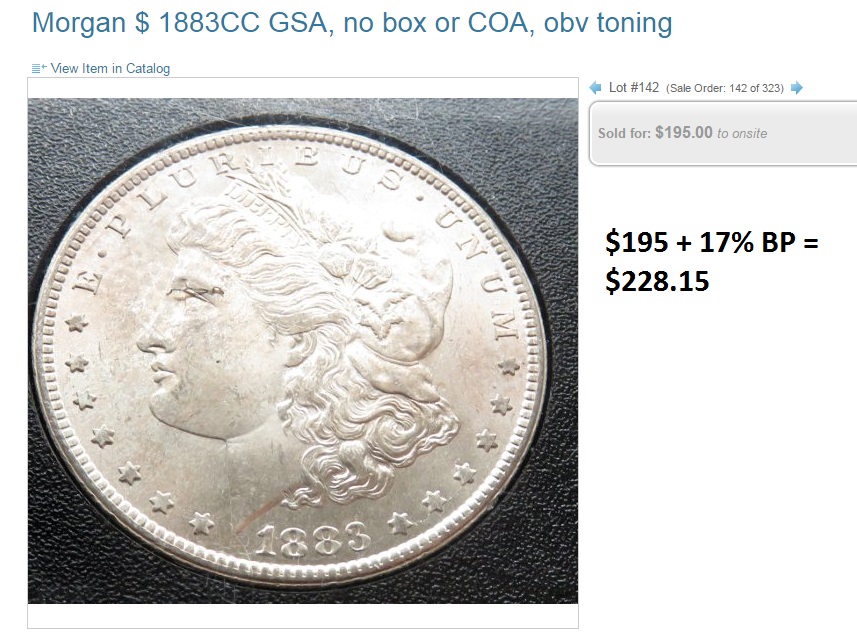 The advantage of bidding on eBay is twofold: no buyer’s premium, and usually cheaper shipping charges than often found on auction portals, where one seller on Proxibid charges postage plus $9.95 handling fee per lot—even though smalls may be included in the same mailer:

While this seller is not typical on Proxibid, with regard to shipping, many sellers on the portal do overcharge, using free U.S. Post Office boxes and charging handling fees (sometimes even inappropriately using USPS boxes for packing!).

Here is a recent sale of an 1883-CC GSA Morgan dollar on eBay: As you can see here, the realized price is about $5 lower than GreatCollections with free shipping, another savings.

A good barometer about the rising costs on auction portals, as opposed to major auction houses like GreatCollections, concerns gold coins. I will not longer bid competitively on HiBid or Proxibid on raw gold coins. Almost all have flaws, from cleaning to damage. But let’s do a price comparison again, because gold sales showcase major differences in online buying venues.

I won this coin, stored with my other coins in a local bank box (recommended for everyone reading this for security purposes), from GreatCollections:

As you can see from the fire symbol, this was a hotly contested auction with hammer price of $628 and realized price of $690.80.

I also won this coin on HiBid.com: 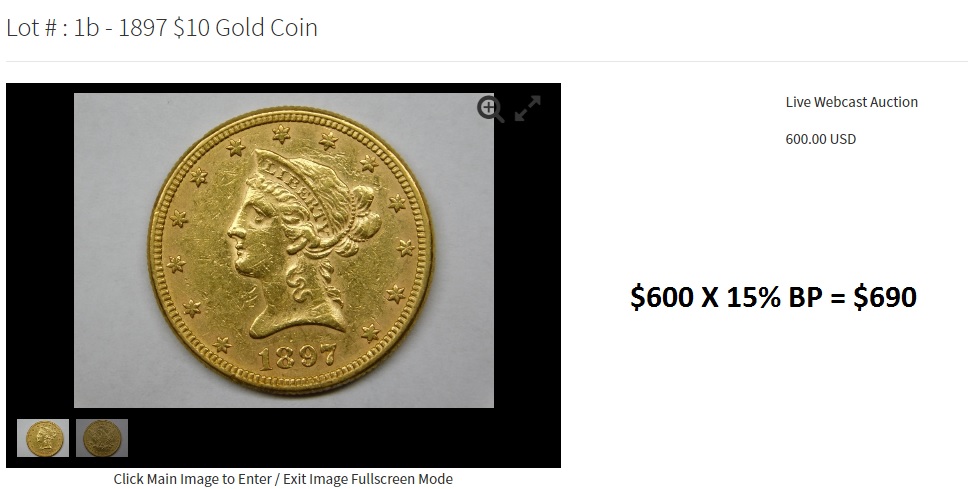 Same realized price, but this $10 gold coin is almost uncirculated and not holdered by PCGS. I put this at AU-55 (assuming it will slab). PCGS Price Guide lists retail of $750 at AU-55, or about $650 based on latest auction prices on PCGS CoinFacts. So if you add holdering and shipping costs, I’m down another $40. The GreatCollections coin retails at $810, about $100 more than I paid for mine. 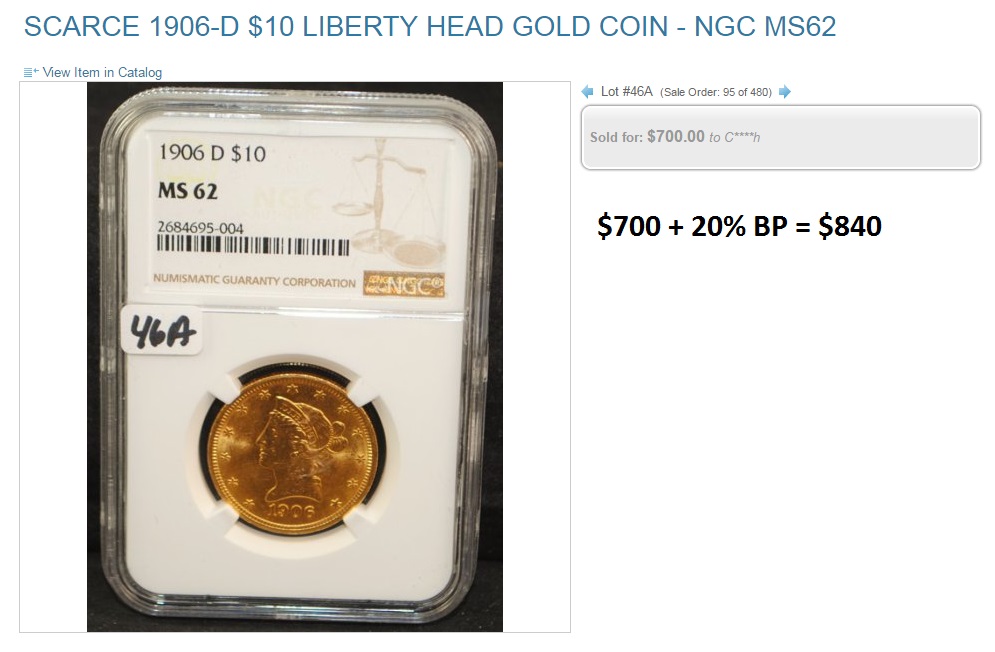 To be sure, you can still find incredible deals on HiBid and Proxibid, but they are becoming scarcer to locate with buyer’s premiums and shipping added to the realized price. And unless you know how to grade, don’t bid on raw coins because determining value is difficult via photographs.

The point here is that we are closing in on that tipping point in online estate auctions. Auctioneers need to cut costs and offer coins at no higher than 15% to keep competitive with aggressive big-house sellers like GreatCollections, which charges 10% buyer’s premium and ships typically at $9.50 Priority Mail plus 50 cents per lot. And Proxibid and HiBid should lower fees when possible or gradually risk losing business on their portals as auctioneers may keep passing costs to bidders.

What are your experiences at GreatCollections vs. HiBid, Proxibid and eBay? Share in the comments below!   ❑