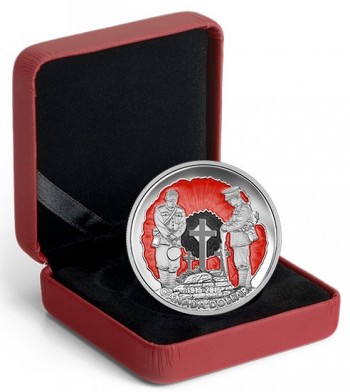 The Royal Canadian Mint has launched a new silver dollar with a vibrant red design to mark the centennial anniversary of the first battle in Flanders, Belgium, which took place between October 19 and November 22, 1914.

The small Belgian town of Ypres in Belgium saw several significant battles during the First World War. There were many battlefield developments with regard to tactics, strategy, and weaponry around this time, including the introduction of chemical weapons in the form of the debilitating mustard gas. Rudimentary tanks and machine guns were also new to international battle, resulting in some of the greatest numbers of casualties ever seen.

The Great War inspired many tales and poems; one in particular was penned by John McCrae, a physician from Canada who served on the battlefields of Ypres under some of the worst conditions, often in underground trenches. McCrae is best remembered for his poem, “In Flanders Fields,” inspired by the funeral of a friend who died during the second battle of Ypres. McCrae was initially unhappy with his work and discarded the poem, but it was retrieved by fellow soldiers who submitted it to the Britain-based Punch Magazine, which published it in its entirety in their December issue.

In Flanders fields the poppies blow
Between the crosses, row on row,
That mark our place; and in the sky
The larks, still bravely singing, fly
Scarce heard amid the guns below.

After its publication, the poppy mentioned in the poem became a symbol of the war and of hopes for peace. The red, delicate flower, which was regarded as a representation of the blood spilled on the battlefields of Flanders and Ypres, has continued to remain part of remembrances of the day the guns finally fell silent—at the 11th hour of the 11th day in the 11th month of 1918, more than four years of the start of hostilities. 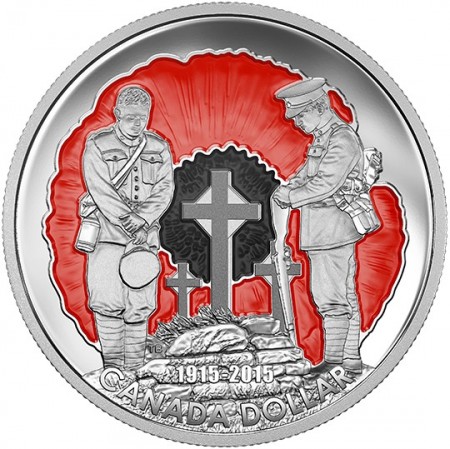 Lieutenant Colonel John McCrae, MD sadly died on January 28, 1918 at the age of 45, while on tour of duty. He succumbed not to battlefield injuries but to pneumonia, which was an epidemic that claimed as many lives as bullets and bombs. He did not live to see the restoration of peace, nor did he know how much his words touched so many who lived through one of the deadliest wars in Europe, said to be “the war to end all wars.” Within 21 years, Europe, the US, Asia, and parts of Africa and the Middle East would be embroiled in yet another world war which would in turn lead to the physical division of East and West on the European continent until the collapse of the Iron Curtain in 1990.

The coin, designed by Tony Bianco, includes a vibrantly colored enamel poppy with finely detailed engraving, creating a stirring scene of remembrance. Like a quiet moment frozen in time, two Canadian soldiers stand on either side of a makeshift grave to mourn a fallen friend and fellow soldier, who lies buried far from home. With his head bent down and dress cap removed, one solemn soldier stands to the left of the stone grave; on the right side of the image, an armed soldier is seen in profile with his rifle pointed downwards. The background is filled with an enlarged poppy, which was immortalized by “In Flanders Fields.” Here, this powerful symbol of remembrance adds a rich vibrancy to the design with its deep, red color. 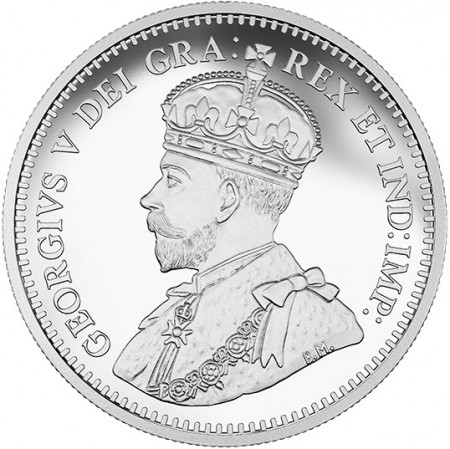 The obverse of the coin includes the effigy of HM King George V, who was king during the First World War, and whose portrait was included on Canadian coinage at the time. Created by Sir E. B. MacKennal, the image shows the King facing to the left, wearing a crown and ermine mantle.