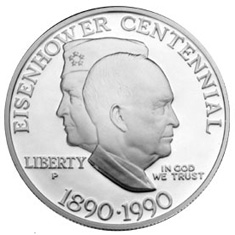 On September 28, 2010, H.R. 1177 5-Star Generals Commemorative Coin Act was passed in the Senate. As the bill was previously been passed in the House on May 20, 2010, it now awaits the President’s signature to become law.

Design requirements state that portraits of the five 5-Star Generals must be included. The final design selections would be made by the Secretary of the Treasury, after consultation with the Command and General Staff College Foundation, the Commission of Fine Arts, and review by the Citizens Coinage Advisory Committee.

Dwight D. Eisenhower was previously depicted on the Eisenhower Dollar series, issued for circulation from 1971 to 1978, and on the 1990 Eisenhower Commemorative Silver Dollar (pictured above).

Provided the bill H.R. 1177 becomes law, the 5-Star General Commemorative Coin Program would fill the commemorative coin schedule through 2013. Generally, only two programs may be authorized for each year. A schedule of upcoming programs appears below.