The Royal Canadian Mint have issued a new coin which remembers one of the most decisive battles which took place early on in the Great War, later referred to as the First World War after 1939. The second Battle of Ypres was fought from the 22nd April to the 25th May 1915 for control of the strategic Flemish town of Ypres in western Belgium, following the First Battle of Ypres the previous autumn. For the first time a former colonial force, that of the 1st Canadian Division, defeated the forces of a European power, the German Empire on European soil, in the Battle of St. Julien and the Battle of Kitcheners’ Wood, which were engagements within the Second Battle of Ypres.

For the soldiers of the Canadian First Division, it meant a relief from the rain and a warm welcome to springtime conditions. They had been repositioned to a quiet rear sector northeast of the town earlier that month, but now found themselves in the front-line within the Salient. Up until this time, the Canadians had not yet been involved in a major engagement with the enemy—a challenge they eagerly wanted to meet so as to prove their mettle and worth. They would soon get their wish in the horrific baptism of fire that began on that warm spring day. It was during this battle, shortly after the burial of his best friend, that a Canadian Army surgeon named John McCrae penned the immortal poem “In Flanders Fields.” It would soon become the anthem for the remembrance of those who made the ultimate sacrifice in a war that would last for another three and a half years. 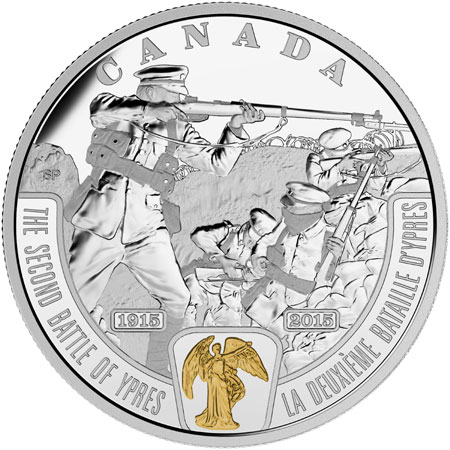 The coin, the second in the new “First World War Battlefront” series is designed by Silvia Pecota (reverse) and Sir E.B. MacKennal (obverse) and includes the depiction of a Canadian soldier standing in the foreground, manned with a bayonet. His Ross rifle is raised as the soldier scopes the advancing enemy. Behind him, one man is crouched down as he tends to his rifle, which has jammed from the rapid rate of fire. Another leans against the sandbags as he fires upon the enemy. To the right, a soldier has pulled his handkerchief up over his nose in an attempt to protect himself against the burning effects of the green-yellow cloud of toxic gas that bore down on the Allies. It is a telling reminder of the great perils faced by the men of the First Canadian Division. The lower portion of this poignant image is framed by a banner, in its center, selective gold plating showcases the winged figure of “Victory,” as it appeared on the Victory Medal that was awarded to the allied soldiers of the First World War. 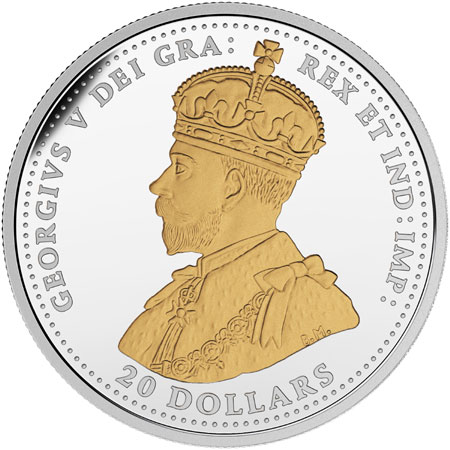 The obverse includes the effigy of HM King George V, who reigned as King of Canada from 1910 to 1936 which was in use on all Canadian coinage throughout his reign. The King’s portrait was designed by Sir E.B. MacKennal.

The first in this eight-coin subscription was issued earlier this year and featured Canadian soldiers in action during the Battle of Neuve-Chapelle. The remaining six will feature coins remembering, The Battle of the Somme, The Battle of Beaumont-Hamel, The Battle of Vimy Ridge, The Battle of Passchendaele, Canada’s Hundred Days and the First Armistice at Compiègne.