(Long Beach, California) January 29, 2018 — The upcoming inaugural exhibit of rarities from the privately owned Tyrant Collection of coins will include the first public displays in the United States of some of England’s most important numismatic treasures. Among the historic items will be one of the three known Edward III gold “double leopard” coins.  The other two examples are in museums.

Veteran professional numismatist and English coinage specialist Bruce Lorich, on behalf of The Tyrant Collection’s anonymous owner, has cataloged the more than 500 “Tyrants of the Thames” coins to be displayed at the Long Beach Coin, Currency, Stamp & Sports Collectible Expo (Long Beach Expo) in Long Beach, California, February 22-24, 2018. This is the first in a series of several articles by him about the historical significance of some of the coins in this unprecedented exhibition. 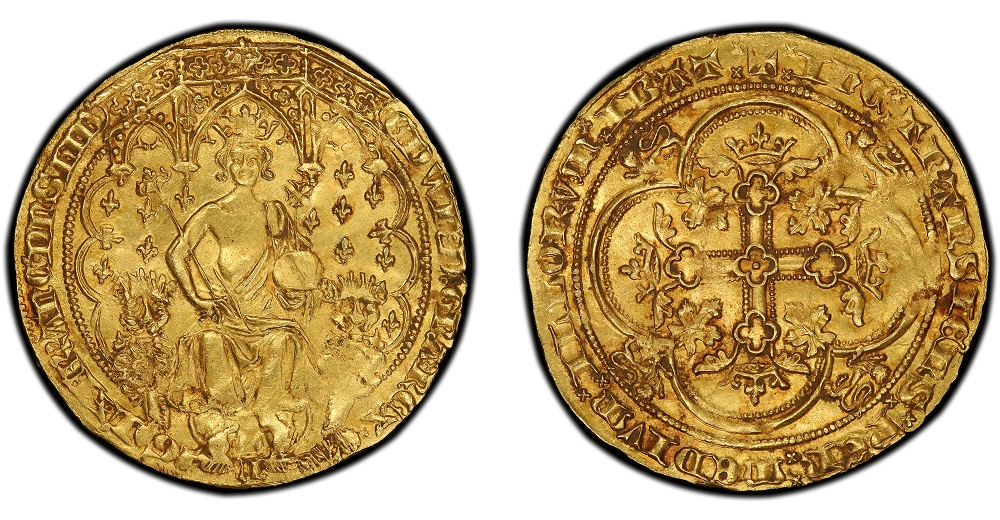 Perhaps the most important English coin in The Tyrant Collection, this is one of only three known gold double leopard coins of King Edward III, and the only one not in a museum. Photo courtesy of Phil Arnold, Professional Coin Grading Service

King Edward III was a widely admired knight who was also feared by his enemies as a bold military commander. Much of his reign took place during the Hundred Years War with France, and by 1340, Edward had declared himself king of France as well. This was outrageous to the French, and the war continued until it was ended in 1360 by treaty.

Meantime, Edward ruled over a rich country at a time when chivalry was at its height. He held jousting and other tournaments, and he founded the Order of the Garter in the same year this coin was minted, 1344. This chivalric order was officially instituted in 1348, its membership limited to the king and just 24 knights. Its inspiration was the mythical Round Table of King Arthur, at which 300 knights sat with their king, reigning over and protecting England.

The Edward III double leopard is one of the earliest gold coins made in England, and today only three examples are known. Two are in museums in England, and the coin that will be displayed in Long Beach and in the United States for the first time is the only example in a private collection.

It is a large gold coin which was worth six shillings at issue. 12 silver pennies equaled a shilling. Most people at the time worked for pennies a week, at best.

No gold coins had been minted in England since the seventh century, except for a pattern penny made for Henry III at the end of the 13th century. The renewed gold coinage of Edward III occurred only briefly from January to August in 1344. It suddenly stopped because of a fiscal crisis involving fluctuating values of silver versus gold, which caused hoarding and a consequent shortage of money in use, as well as melting of gold.


Edward III’s first gold coins consisted of three denominations: a half-florin featuring a royal helmet with a crowned lion standing on it; a florin of twice that size showing a crowned sideways-facing leopard holding the king’s royal shield on its back (from which its present name of “leopard” was derived); and a double-florin twice as large as the florin depicting the king seated and crowned with two facing leopards at his sides (popularly called the “double leopard”).

These pieces of money had an enormous face value, especially the double-leopard, and were intended mainly for trade with countries on the continent of Europe.

The leopard was this king’s armorial animal; it was placed on his “arms” (or official shield) standing sideways, one paw raised with its head facing the viewer, growling, and it was also used on armor. The effigy of the king’s famous son, Edward the Black Prince, entombed in Canterbury Cathedral, is depicted wearing armor showing several leopards, and his head rests on a crowned leopard.

For centuries, silver coins were the only money used in England. These three coins, minted in nearly pure gold, were made for only a few months in 1344, but they failed in their intended use, and almost all known examples of all three denominations were melted during the 14th century. They were replaced beginning at the end of the same year they were made, 1344, with a new series called the Noble and its fractions. These coins became the standard issues for many years afterward, succeeding because their values equated with those of coins made in France and elsewhere in Europe.

The Tyrants of the Thames exhibition at the February 2018 Long Beach Expo is being presented by The Tyrant Collection’s anonymous owner with the assistance of Ira and Larry Goldberg Coin & Collectibles of Los Angeles.