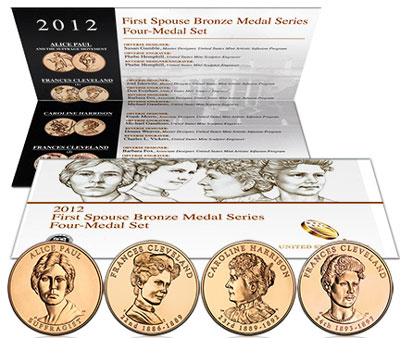 Under the authority of Public Law 109-145, the Secretary of the Treasury may strike and sell bronze medals that bear the likeness of the First Spouse Gold Coins. From 2007 to 2011, these medals were offered for sale individually, within Presidential $1 Coin & First Spouse Medal Sets, or within an annual set containing one example of each medal issued during the year.

For 2012, the medals will only be available within the Presidential $1 Coin & First Spouse Medal Sets and within the present Four-Medal Set.

This year’s medal feature the following:

The 2012 First Spouse Bronze Four Medal Set is priced at $16.95. There are no stated product limits or ordering limits. Orders may be placed online at http://catalog.usmint.gov/