The Government of Niue will launch (30th January) a set of coins with a special message of love and togetherness, the perfect token of affection for your significant other and… just in time for Valentine’s Day!

The unusual pair is struck by the Mint of Poland who have become widely known and highly regarded for producing coins with innovative shapes and technical advancements. The coins take the shape of inter-connecting jigsaw puzzle pieces, which actually fit together to form one larger coin of two halves. Designed by the artist Beata Aleksandrowitz, the coins also include cut crystals from Swarovski and a color application depicting a red heart, also in two halves. 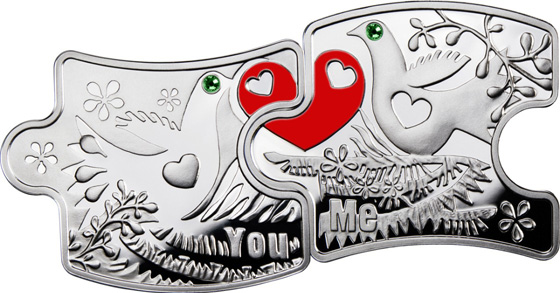 The reverse design of the coin includes a pair of “love birds” each of them perched on a branch surrounded by flowers and offering their half of the heart to one another. On one half of the coin is the word “YOU” and on the corresponding side, the word “ME”. The obverse of the coins also offers corresponding elements, including a string of heart-shaped balloons which illustrate two halves along with the year of issue “2012” and the coin’s denomination of 1 Dollar. A cameo-style effigy of H.M. Queen Elizabeth II is placed on each half.

The coins are struck in sterling silver and in proof quality. Each side of the coin weighs 14 grams with a diameter of 37 / 29.9 mm. Sold in pairs, they are meant to be handled and, as a precaution to tarnishing, a protective coating has been added to the surface of the coins. The coins will be on display for the first time at the World Money Fair in Berlin from the 3rd to the 5th February.

For more information of these numismatic “firsts”, please visit the website of the Mint of Poland at: http://www.mennica.com.pl/en/main-page.html