Production on the United Kingdom’s latest commemorative coin commenced today as the Royal British Mint began striking the royal wedding crown for Prince William and Catherine Middleton’s upcoming marriage. The Royal Wedding will occur on the 29th April 2011 at the historic Westminster Abbey in London.

The designer of the coin Mark Richards, was on hand to witness the first of the silver and cupro-nickel £5 crowns.

The Royal Mint is looking to guarantee delivery for the cupro-nickel crowns, the silver, gold plated silver, gold and platinum versions which have been pre-ordered by  collectors by the actual date of the wedding. 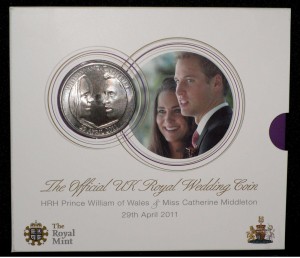 The coin’s reverse features relaxed, modern portraits of the couple, an approach also evident in the informal use of their first names and the date of the wedding encircling their portraits. The obverse bears a portrait of Prince William’s grandmother, HM Queen Elizabeth II. The design was approved by the Queen as well as the royal couple and is only the second royal wedding crown minted in the United Kingdom, the first being that for the wedding of Prince William’s parents, the Prince of Wales and Lady Diana Spencer in July 1981.

For more information on this commemorative coin, please visit the website of the Royal Mint at: http://www.royalmint.com/royalwedding/wedding_products.aspx 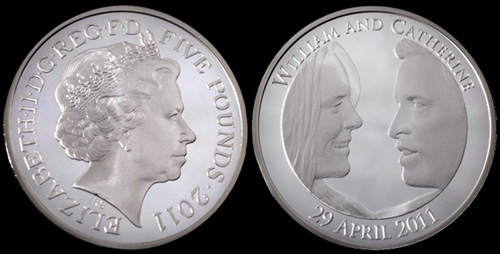