In early December the Chinese Mint held the first International Coin Designer Training program at its Shanghai branch mint, which brought together several prominent coin designers from Europe, the U.S., and China. These experienced coin designers and medallic artists shared their wealth of experience with artists and designers from China during several days of presentations and workshops.

Joel Iskowitz, a former member of the U.S. Mint’s Artistic Infusion Program and prolific American narrative artist who has designed countless coins, stamps, and medals for many countries and private mints, was the U.S. participant in the program who was asked to teach and give lectures on the key concepts and techniques involved in designing coins and medals.

Joel was invited to be one of the program instructors by Ms. Tina Deng of the Shanghai Mint. He is no stranger to China, having previously been there 25 years ago on a U.S. Air Force Art Program assignment. 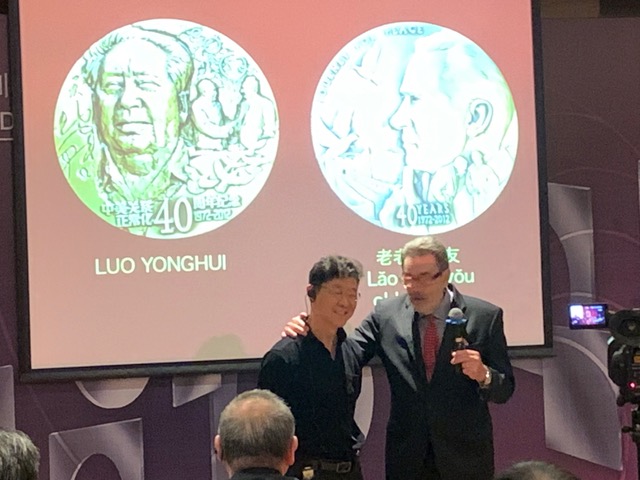 Luo Yonghui and Joel Iskowitz reconnecting nine years after their work on the Journey for Peace medal during the presentation by Joel. Hover to zoom.

In addition, nine years ago, at the invitation of prominent numismatist Mel Wacks, he worked with a team of Chinese medallic artists and designers led by Yonghui Luo to design the “Journey for Peace” medal issued by the Chinese Mint for the 40th anniversary of former President Richard Nixon’s historic visit to China in 1972. 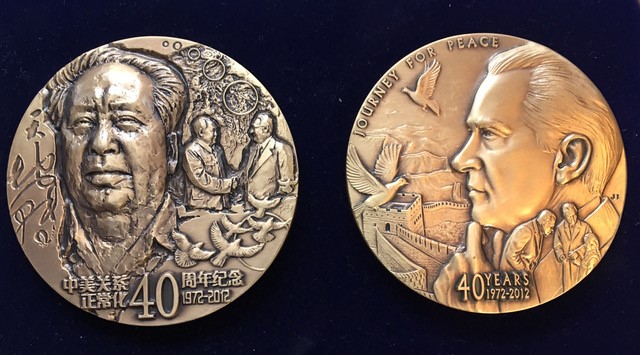 Obverse side of Chinese medal for 40th anniversary of Nixon’s visit to China.

Only 400 of these high-relief, bronze two-medal sets were struck by the MedalCraft Mint in Greenbay, Wisconsin for the Art Medal Communication center in Shanghai. The medal consists of two halves that each over 10 ounces and fit together. The obverse of one medal features an image of President Nixon and smaller images of doves and of the U.S. president in China, while the other obverse features Chairman Mao of China and smaller images of him with Henry Kissinger and more doves. 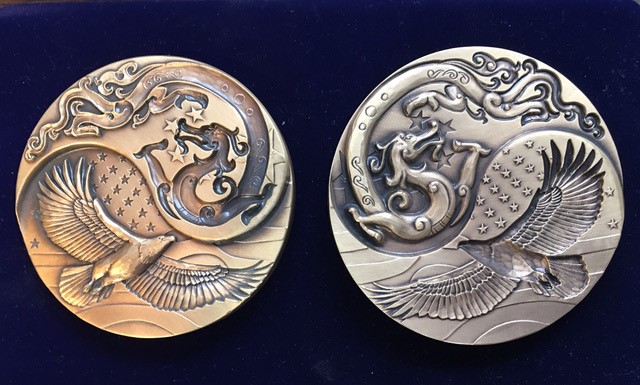 Reverse side of Chinese medal for 40th anniversary of Nixon’s visit to China.

Each reverse features a yin-yang design of an American flying eagle and a Chinese dragon.

During the recent training program, Joel was able to reunite with Mr. Yonghui and said he was “embraced as a family member of the artistic community and by those I met in commerce and government.”

I have always believed that art is a universal language which transcends cultural and physical barriers and even time itself. As a designer of coins and medals, I have witnessed their powerful role as ambassadors of good will which connect humankind in marvelous ways. Envoys of our collective human story, they are miniature in physical size yet epic in content. Coins and medals are the of history, art, and beauty.

It is my hope and belief that this first successful International Coin Designer Training inaugurates and inspires a new frontier of dedicated collaboration, a golden era of beautiful coins and medals that combine the best of our cultures and talents to add to the beauty and harmony of our world. 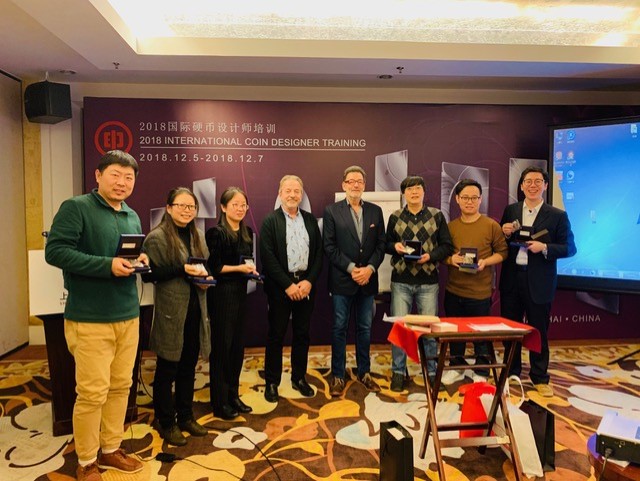 Joel provided additional insights on his experience with this program in an interview with Coin Update, which sheds light on the state of medallic art in China and collaboration between Chinese designers and those from other countries.

Louis Golino: When did the training program occur and how long did it last?

LG: Was the main purpose of the program increasing collaboration between Chinese coin designers and those from other countries?  Did it have other goals?

JI: Yes, in general this initiative was intended to educate, engender mutual understanding and respect, enhance communications, and possible future collaboration between the East and the West. The emphasis was certainly international as suggested in the title of the event.

This approach to share knowledge and inspiration for design excellence across cultural and national borders was realized by inviting presentations by artists/designers, such as the brilliant Erkki Vainio of Finland, worldwide tool and die expert Torbjørn Hansen of the Norwegian Mint, and myself. The great Chinese master sculptor Yonghui Luo and rising star, Zhu Xiuai, also had important input in every phase of the program. Many of China’s finest coin and medal designers were selected from a competition to participate as well.

I would add that besides the actual colloquy concerning design principles, procedures, and techniques, an additional — but extremely tangible benefit — was the goodwill and camaraderie established among all the artists/designers and the Mint officials who participated.

China is in the midst of a celebration of a 40-year-period of openness. Since 1978 this new era of prosperity and great transition in Chinese culture and art has robustly welcomed ideas and advances of Western nations. The timing of this event could not have been more perfect as China’s successful economic, cultural, and artistic renaissance ushers in a new world order that warmly welcomes active participation by Western civilization.

For myself personally, as someone who believes that art has no borders and considering the general direction my career as an artist has been taking, with more international commissions, this could not have been a more-timely event to be invited to participate in.

JI: Yes, both Zhu Xiuai and Yonghui Luo are employees of the Shanghai Mint, Mr. Yonghui being the senior designer/sculptor, similar to the position of engraver. Many other accomplished Chinese artists participated. My understanding was that some have a contractual relationship with the Shanghai Mint and some were independent artists.

LG: Please describe some of the programs you participated in and what activities took place during those programs.

JI: There were three main presentations, mine being the first on 12/5, Erkki Vainio’s being the second on 12/6, and Torbjørn Hansen’s on 12/7. However, I left Shanghai early that Friday morning and did not attend the last day of the training.

Additional workshops included presentations of artists/designers’ work which were reviewed, critiqued, and judged in a competition. The five principals mentioned earlier forming the panel of judges. Topics covered included:

LG: Are there any particular artistic styles or techniques that you would associate with Chinese coin designers other than the use of symbols and imagery from Chinese culture?

JI: My overall take away from being exposed to the wide array of designs from the Chinese participants was a sense that no matter how enthusiastically they embrace Western influences and modern approaches both aesthetically and technically, they have a natural and inborn respect for their rich and ancient cultural artistic heritage. They do not abandon this lineage in favor of blind rush to be “modern.” They realize that there is a precious connection to the art of the and that art really is timeless and retains its relevance if it is created without the artificial and superficial need to appear contemporary.

On a more pedestrian note, I believe that because of a long history of visually interpreting the world through a lens that embraces a circular, mandalic view of the universe (think Yin-Yang) these artists seem to have a very fluid and naturally elegant sensibility when designing in the round. Also considering the fact that their written form of communication is a type of animated calligraphy or pictograph, these artists have a superb ability to effectively combine inscriptions with figurative imagery.

All in all, although, I was honored to present as an authority in , I came away from this event awed by the richness and pure artistry of the participants. Most impressive to me was the depth, character, beauty of the younger designers’ creations. 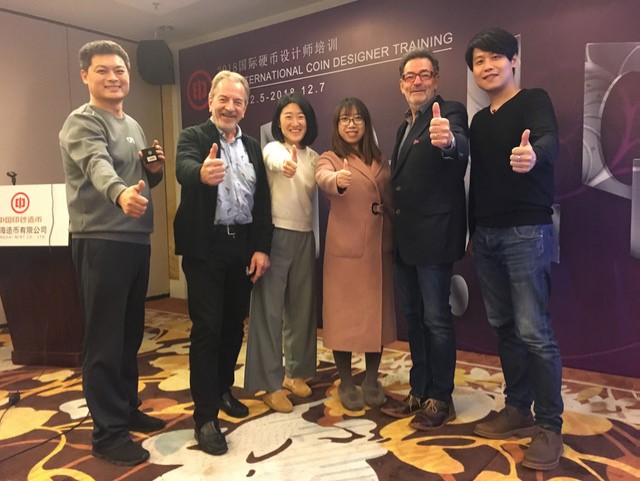 LG: you, Erkki Vainio, and Zhu the main instructors and the ones who led the discussions and presentations?

JI: As I mentioned above, myself, Erkki Vainio, and Torbjørn Hansen made the formal presentations, but Mr.Yonghui and Zhu Xiuai played a very active and important role in the training. Their comments were very informative and as is evidenced in the Chinese world of arts and letters, quite poetic. Listening to some of the comments, especially those of Yonghui Luo, I thought of some of the grand statements of Andre Malraux, who spoke of a sisterhood and brotherhood of artists that speak to each other, unbounded by the constraints of time or national and cultural boundaries.