The United States Mint has confirmed that they will not offer First Day Coin Covers as part of the numismatic product line for the new America the Beautiful Quarters series.

According to Michael White of the United States Mint, “The First Day Coin Covers were discontinued as part of the comprehensive, top-to-bottom review of our numismatic product portfolio, which focused on those products collectors most appreciate and order most often.”

The US Mint’s 2009 Annual Report provided further information on the methodology for evaluating products during the portfolio assessment. Discretionary products were evaluated based on contribution to sales volume. Only those products which consisted of at least one percent of total unit sales were retained. 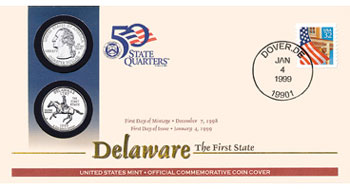 The US Mint had previously offered First Day Coin Covers for the 50 State Quarters Program as well as last year’s District of Columbia & United States Territories Quarters Program. Each cover consisted of two quarters for the given release mounted on a display card and placed within a stamped envelope.  The envelopes were postmarked with the circulation release date at a location related to the coin. For some releases, the quarters included in the covers are from the day of production at each Mint facility and a special pictorial cancellation was used. 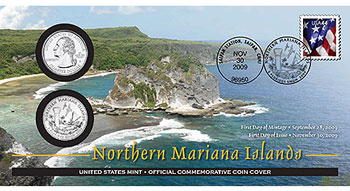 For 2009, the United States Mint offered the First Day Coin Covers for the DC & US Territories Quarters Program. The first three covers featuring the District of Columbia, Puerto Rico, and Guam had a stated maximum production of 25,000 units. The final three covers featuring American Samoa, U.S. Virgin Islands, and the Northern Mariana Islands had maximum production lowered to just 20,000 units.

The most recent sales figures for the 2009 Quarters First Day Covers range from a high of 19,027 for the District of Columbia to a low of 8,740 for the Northern Mariana Islands. All six covers remain available for sale on the Mint’s website.

The United States Mint has continued to offer First Day Coin Covers for the Presidential Dollar series under the American Presidency $1 Coin Cover series. The most recently cover featuring Millard Fillmore was released on April 2, 2010.