The first of three annual Long Beach expositions is coming up again and will be held at the Long Beach convention center from February 22nd to 24th. In conjunction with the show, Heritage Auctions organizes one of their signature auctions of U.S. coinage. In this preview article, we will take a look at what that catalog has to offer. More precisely, we will be looking at five noteworthy coins that are worth a closer look due to their rarity, eye appeal, or for other reasons. All lots discussed in this article as well as all other lots held in both the floor session and the online auctions can be viewed in detail on the website of Heritage Auctions.

Collecting large cents (struck from 1793 to 1857) is a very popular collecting field, with many collectors putting together date or major variety sets, and others even trying to collect the denomination by die variety. For collectors of date or major variety sets in high grade, lot 3718 might be a good candidate. This 1803 Draped Bust Large Cent with a small date and small fraction has been graded AU-58. 1803 is a date that is very difficult to find in AU or better. The variety is one of several distinct varieties found in that year, the result of the dies being individually cut, leading to minor differences between dies even of the same style.

The offering of a 1794 Flowing Hair Silver Dollar is always special, thanks in part to its status as the nation’s first silver dollar and because of its rarity, with just 1,758 pieces reportedly struck for circulation. Despite this low number they do show up from time to time, an indication that numismatists of the mid 19th century were already aware of the scarcity of this issue, causing perhaps a larger than average number of pieces to survive. Lot 3947 in the Heritage auction features a nice mid-grade example of this classic rarity, graded VF-35. The coin has only been offered publicly two times earlier in the past century, with the first offering in 1910 not followed until 2007. An iconic American coin that should see spirited bidding when it crosses the auction block in Long Beach. 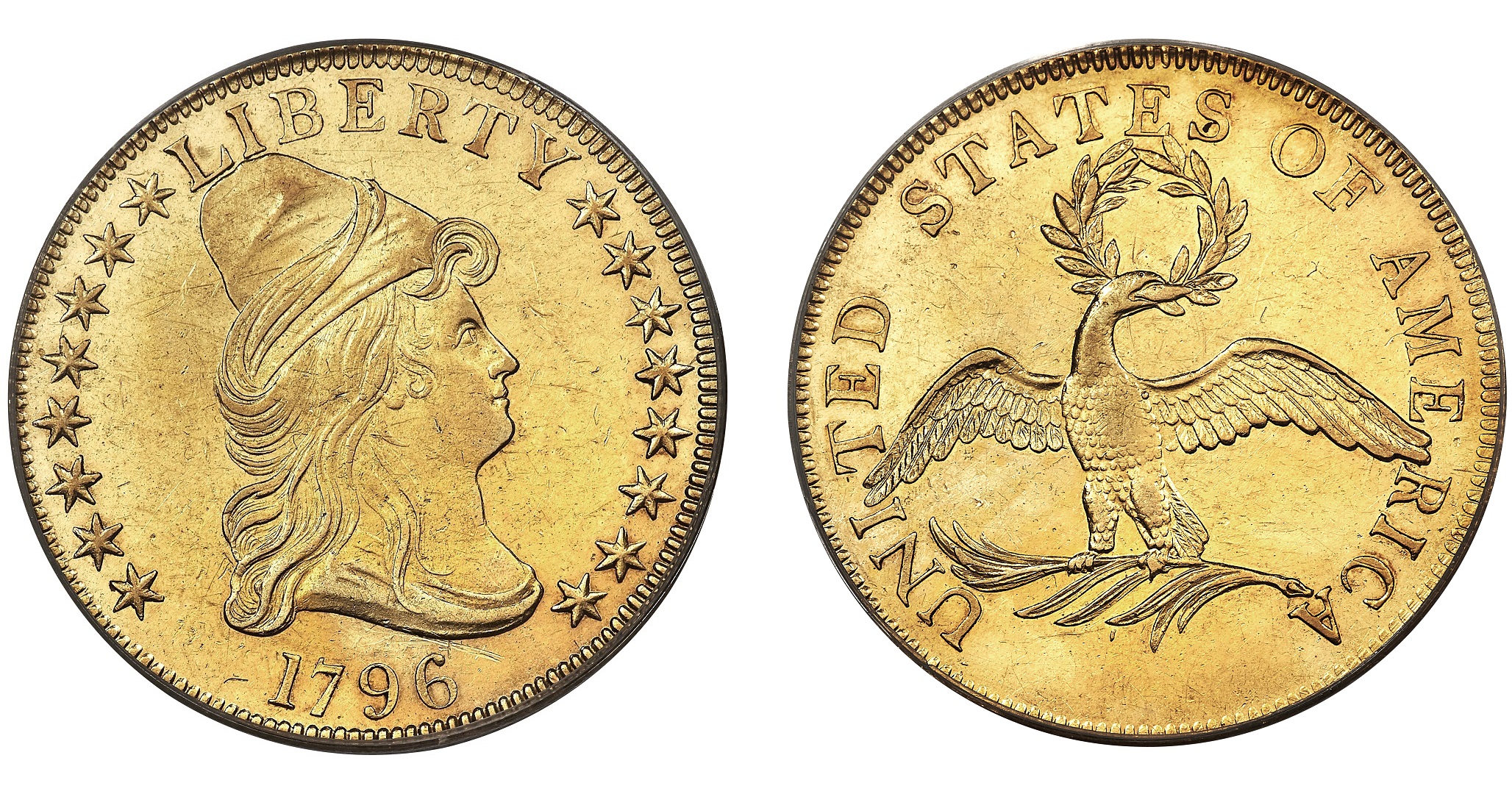 Staying with early American coins, lot 4195 is a high-grade example of one of the earliest gold coins struck by the United States Mint. This 1796 Ten Dollar Gold piece, graded AU-58, is an unlikely survivor of what was until 1849 the largest denomination struck by the Philadelphia Mint. Reportedly 4,146 eagles were struck for circulation in 1796, but it is generally assumed that this figure included a quantity of coins dated 1795, as it was normal that dies were used until they wore out, regardless of the date displayed on the coin. High-grade examples of both this date and type are very scarce, and if one realizes the buying power this coin must have had when it was made, then that should come as no surprise.

We often talk about low mintages as being in the hundreds of thousands versus millions, but there are certain coins that saw such minuscule numbers struck that it is a miracle any survived. A good example of this would be the 1875 Ten Dollar Gold piece, of which a mere 100 pieces were struck for circulation. This gives it the lowest mintage of any circulating coin ever struck by the United States Mint. The reason for the low mintage is unclear; it certainly was not to satisfy collector demand, as a small number of Proofs were traditionally struck each year for that purpose. Anyway, if you have been looking for a nice example of this coin, lot 4292 in the Heritage sale might just be for you. This 1875 Eagle is graded AU-50 and is among the nicer examples known to exist, out of perhaps nine or 10 examples believed to be still in existence to this day. None of these are Uncirculated, and at this point, it seems unlikely that a true Uncirculated (Mint State) example of this rarity will every show up.

The Confederate States of America (CSA) issued a large quantity of paper currency to finance their war against the United States, but a true coinage never took off, making original CSA coinage extremely rare. Fortunately for collectors, restrikes were made of some issues, including the 1861 CSA One-Cent, which was restruck in bronze, silver, and gold. Robert Lovett of Philadelphia was persuaded by John W. Haseltine, a coin dealer, to make these restrikes in the 1870s. Allegedly Lovett had struck a small number of originals during the Civil War but never shared this at the time from fear of being convicted of treason. Only seven examples were reportedly struck in gold, and of these, six are still known to exist. One of these extremely rare gold examples will cross the auction block at Long Beach as lot 3902, graded EF Details (damaged). While not the highest graded example of this numismatic rarity, its offering itself is noteworthy, as very few of these gold restrikes ever come up for auction.