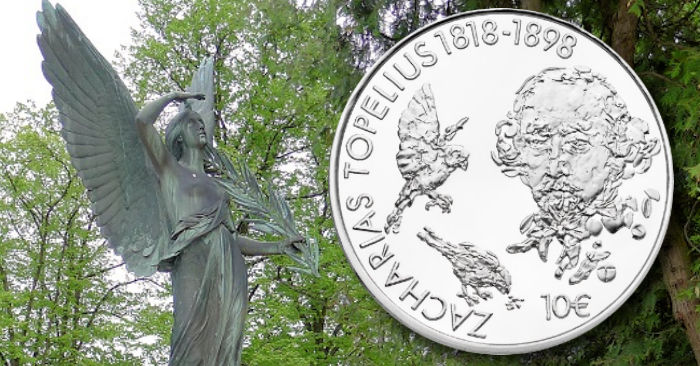 The Mint of Finland have launched (18th December) a new coin which was created in honour of the country’s best-known author, poet, journalist, and historian. Once regarded as one of the most influential figures in society, Zacharias Topelius (1818-1898) is still remembered today as a master storyteller and as a lyricist of best-loved Christmas carols. Topelius was not only a distinguished novelist, he was also the rector of the University of Helsinki and wrote insightful interpretations of social phenomena and structures, as seen in Välskärin kertomuksia (Tales of a Barber-Surgeon), one of his most famous novels.

Designed by Erja Tielinen, the reverse of the collector coin features a stylised image of Topelius positioned to the right side of the coin and a reference to the sparrows in his tales, which are seen to the left side of the coin with the denomination seen just below the primary design.

The obverse of the coin is a reference to Topelius’s Koivu ja tähti (The Birch and the Star) fairytale. The year of issue, 2018, is seen below the primary featured design.

Pre-issue orders are now being accepted, the coins are available from the 12th January 2018. Of the 4,000 €20 pieces, 100 of these coins will be individually numbered from 001 to 100. The numbered commemorative coin is packaged in a protective clear capsule set in a custom designed glass case together with a certificate of authenticity containing the commemorative coin’s technical specifications. The number of the commemorative coin is stamped on the coin’s reverse. For additional information on these and other coins offered by the Mint of Finland, please visit their website.

A Swedish-speaking Finnish author, poet, journalist, and historian, Zacharias Topelius stands out even today as one of the country’s more influential personalities who has shaped Finnish literature and was an extraordinary contributor to both the written and spoken language. Despite the belief that Topelius was, in fact, an ethnic Swede, the original name of the Topelius family was the Finnish name Toppila which had been Latinized to Toppelius by the author’s great-grandfather and later altered to Topelius. Zacharias was born in 1818 in Nykarleby, a town located in the province of western Finland, and part of the Ostrobothnia region, where Swedish was the predominant language.

Topelius came to Helsinki in 1831 at the age of just 13 and became a member of the circle of young nationalist men who were acquainted with Johan Ludvig Runeberg (1804-1877), Finland’s national poet and the author of the lyrics to “Vårt Land” (Our Land, Maamme in Finnish) that would become the Finnish National Anthem after independence and in whose home he stayed for some time. Topelius became a student at the Imperial Alexander University of Finland in 1833, receiving his master’s degree in 1840, a licentiate degree in history in 1844 and eventually his Ph.D. in 1847.

While he was busy with his studies, in December 1841, Zacharias Topelius was hired to edit Helsingfors Tidningar, (Helsinki Gazette) a Swedish language newspaper with a salary of only 200 silver roubles, which was not particularly high considering he was also required to pay the salary of his summer replacement. Catharina Sofia Topelius was not at all convinced by the career choice of her son and made her views on the matter clear. Having graduated with a master’s degree Topelius was, in fact, pursuing a career as a teacher, or at least his mother saw teaching as a more suitable profession for her 23-year-old son. His career was of particular concern because he was engaged to be married and therefore needed a salary that would support a family, but the young reporter, however, proved himself to be a skillful wordsmith and thus able to att­ract new subscribers for the newspaper.

Quite early in his career, he began to distinguish himself as a lyric poet, with the three successive published volumes of work beginning with Heather Blossoms (1845–54). The earliest of his historical romances was The Duchess of Finland which was published in 1850. As a young student, Topelius had immersed himself in a wide range of literature, and his new position now brought his literary expertise to bear as a writer to produce massive quantities of serials and stories for the newspaper. He did not want to settle for copying and pasting stories from other newspapers to put an issue together, a practice all too common at the time, so he worked tirelessly to produce new original material, fact and fiction alike. His hard work had indeed paid off as the circulation of the newspaper more than doubled over a ten-year period, rising from 741 copies in 1842 to over 1,600 editions in 1852. Luckily, as a result of his increase in readership, Topelius also saw an increase in his salary. Perhaps showing a degree of foresight and in his editorial ability as early as 1843, he had tied his salary to the number of subscribers. By 1845, his salary had risen to 500 roubles which was similar to that of a junior lecturer at University and at the time of his resignation from the newspaper in 1860, his salary of 2,500 roubles was comparable to one enjoyed by a senator.

Of all the diverse writings of Topelius, that which has enjoyed the greatest popularity was his Tales of a Barber-Surgeon, which were episodes of historical fiction from the days of King Gustavus II Adolphus to those of Gustavus III. Treated in the manner of Sir Walter Scott, the five volumes of this work appeared at intervals between 1853 and 1867. Topelius attempted to write drama as well, with the most successful of his plays being a tragedy entitled Regina von Emmeritz (1854).

On the occasion of the official visit of Tsar Nicholas I to Helsinki in March 1854, Zacharias Topelius was appointed professor extraordinaire of Finnish history at the Imperial Alexander University. The appointment was surprising since Topelius had not applied for this position and additionally it seemed rather tailor-made for him. The appointment was a delight not only to Topelius, who could stay in Helsinki, but also to broader groups promoting Finnish nationalistic sentiments who saw the appointment as a step forward in the development of the Finnish nation. The exceptional procedure of the appointment, along with Topelius’s loyalist political orientation and patriotic poetry which defended Russian affairs, however, led to him being viewed in some circles as a hired mouthpiece for Russian propaganda. Editorials in some newspapers contributed to the increasing view of Topelius as a Russian appeaser, a view which deeply hurt him. However, the appointment started a long career in the university which culminated by a term as rector from 1875 to 1878 and the title of councilor of state at the end of his career.

In the summer of 1862, Topelius proposed a new flag, which was able to incorporate a historical coat of arms. The history of the crest reaches back to the 16th century when the grand duchy of Finland acquired a coat of arms of its own. The crest included a red shield bearing a rampant yellow lion with an armoured human arm holding a sword. White roses were scattered around the field and a yellow border completed the crest. When Finland passed from Swedish rule to Russian in 1809, it lost much of its autonomy and it was at this time that the Finnish people began to create local symbols to remind themselves of their own language, culture, and history. Many flew impromptu flags using the red, yellow, and white derived from the coat of arms as well. It was Zacharias Topelius’ new design which proved popular with its white background for the snows of Finland and blue for its lakes, the latter being represented in the form of a Nordic Cross. When Finland achieved its independence after the Russian Revolution of 1917, there was debate over the best official flag for the new country. At first, the coat of arms itself became the basis for the flag — a red field adorned with white roses and a gold and white lion at sea. A flag of red with a cross of yellow, bordered in blue and white, was recognised first. Eventually, national sentiment supported Topelius’s white flag with a blue cross and crowned crest in the middle of the cross which was officially adopted on the 29th May 1918 — when Finland was still on a path of developing its independent government as a monarchy, which had been abandoned five months later. The crest remained in some versions of the flag but was no longer crowned.

In 1878, Topelius at the age of 60-years-old had unofficially retired from his professional duties. This did not sever his connection completely with the university but it did give him the free time he needed in order to pursue his prolific and various literary enterprises. Topelius died in 1898 at the age of 80 years at his manor house in the town of Koivuniemi, where he wrote his greatest works. He was buried in the Hietaniemi Cemetery in Helsinki where many statesmen and prominent Finnish persons are laid to rest. As tribute to Topelius, there is a small Finnish-American village named after him which was founded in 1901. The location is in Otter Tail County, Minnesota.