The Mint of Finland has launched a new collector coin to mark the 150th anniversary of the birth of Akseli Gallen-Kallela (1865–1931), a master painter whose influence on the Finnish national character is still felt in many aspects of Finnish culture.

Born Axel Waldemar Gallén in Pori, Finland, to a Swedish-speaking family, his father is said to have opposed his ambition to become a painter. Gallen-Kallela studied painting in both Helsinki and Paris, and went on to become a leading figure in modern Finnish painting and decorative arts. The most famous works from Gallen-Kallela’s early period include the Realist paintings Boy with a Crow (1884), the Old Woman and the Cat (1885) and Démasquée (1888), painted during his art studies in Paris.

On returning to Finland, he became fascinated with the ‘Kalevala,’ Finland’s national epic, which is a compilation of ancient poetry and narrative handed down through the centuries, celebrating the mythic origins of Finland. He decided to base his art on much of the Kalevala and by the mid-1890s Gallen-Kallela began to incorporate Symbolist motifs in his work. His landscape paintings from around 1900 show the influence of both Gauguin and Monet, but over the course of his career many other styles and influences surfaced in his extraordinary paintings.

Gallen-Kallela is especially remembered for the momentous work he undertook when he was commissioned to paint the Kalevala-themed frescos for Finland’s pavilion at the Exposition Universelle of 1900 in Paris. In 1909, Gallen-Kallela moved with his young family to Nairobi. There he created over 150 expressionist oil-paintings and bought many east African artifacts. After a couple of years, he realized that his homeland was still his main inspiration and returned to Finland.

During the War of Finnish Independence in 1918, Gallen-Kallela and his son Jorma took part in the fighting; both were stationed at the front lines of the battle. When the regent and national hero General Mannerheim later heard about this, he invited Gallen-Kallela to design the flags, official decorations, and uniforms for the newly independent Finnish state.

From late 1923 to 1926, Gallen-Kallela lived in the United States, where an exhibition of his work toured several cities. While in the US, he visited the Taos art-colony in New Mexico to study indigenous American art. It was during this time in 1925 that he embarked on the greatest undertaking of his career, that of beginning the illustrations for his “Great Kalevala”. However, this work went unfinished after he died of pneumonia in Stockholm on March 7, 1931. His studio and house were opened as the Gallen-Kallela Museum in 1961; it now houses some of his works and research facilities pertaining to the artist. 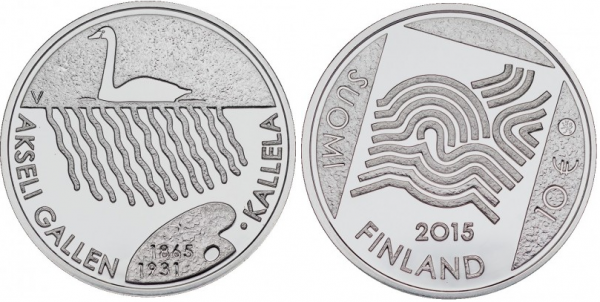 The coin, designed by Hannu Veijalainen, depicts a painter’s palette, the descending spirit, and the Swan of Tuonela on the obverse. The text AKSELI GALLEN KALLELA and the years 1865 1931 can be seen on the artist’s palette.  The figure on the reverse is an homage to Gallen-Kallela’s prints. The text SUOMI FINLAND, along with the coin’s denomination and year of issue, are also included in the design.

For more information on these and other coins on offer from the Mint of Finland, please visit their Web site. Information is offered in English, Finnish, and Swedish, with international orders dispatched where applicable.