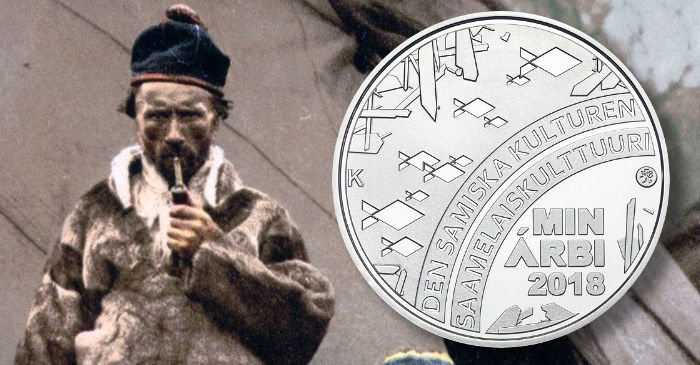 The Mint of Finland have launched (18th January) new silver collector coins which offer a fascinating look into the indigenous Sami people and their culture which has developed on the northernmost part of the European continent since the end of the Ice Age.

Believed to be some of the very first inhabitants on the European continent, the Sami are also related to the Inuit people living in Greenland and the northern half of North America who migrated from Eurasia (what is today Siberia). Their presence in Europe is thought to have begun just after the end of the Ice Age and they are also believed to be the descendants of the Komsa culture, which existed from around 10,000 BC in Northern Norway.

Traditionally, the nomadic movement of the Sami peoples was dependent on the migration of the reindeer that were herded and raised for food, for various products such as clothing, and for use in the construction of tent-style dwellings. It is believed that since the Viking Age, the Sami culture has been driven further and further north, and Sami people who remained further south increasingly mixed with Finnish and Scandinavian settlers — some losing their culture and language entirely. Of the 11 different historically attested Sami languages, traditionally known as “dialects,” nine have survived to the present day but with most in danger of disappearing.

Since the 15th century, the Sami people were traditionally subjects of Sweden, Norway, Russia, and for some time, Denmark, but in the 16th century King Gustav I of Sweden (who reigned from 1523 to 1560) officially claimed that all Sami should be under Swedish rule. During this time, their traditional areas were shared between the countries of Sweden and Norway.

Today, in what is often referred to as Lapland, these areas comprise the northernmost regions of Norway, Sweden, Finland, and the region of Northern Karelia on the Kola Peninsula. Over the centuries, especially during the early 20th century, a recognised Sami community has emerged with semi-autonomous councils and guaranteed representation in several Scandinavian parliaments. A flag which is representative of the Sami regions can also be seen flying across the various borders in Northern Europe alongside the flags of their respective countries. Of the current population, which is estimated to total between 80,000 to 100,000 Sami, there are approximately 10,000 Sami people living in Finland.

The Sami culture commemorative coin, which is designed by Inka Kangasniemi, pays tribute to the Sami people’s special relationship with nature and the traditional Sami territory, Sápmi, which is spread over the territories of four states. The reverse of the commemorative coin pays homage to the power of the sun in regulating the Sami year. The Sami are regarded as “children of the sun,” and the moment when the first rays of the sun break through after the long polar night is a very exciting moment. 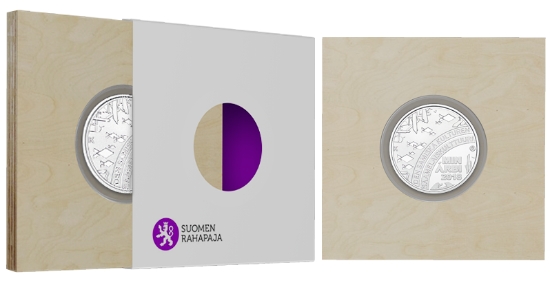 Released officially since the 6th February, the silver coins manufactured at the Mint of Finland’s Vantaa factory bear the Key Flag Symbol of Finnish origin issued by the Association for Finnish Work. The commemorative coins are individually packaged in plastic casings set in a birch veneer frame crafted by Finnish carpenter Wooden Oy. The frame is surrounded by a ribbon and the package contains a certificate of authenticity telling the story behind the collector coin.

Each coin includes a repeated incused inscription on the edge which reads SAMIKULTTUR. The 20-euro coins have a total mintage of 4,000 pieces, of which 100 pieces have been individually numbered and stamped on the coin’s reverse, and are presented in a custom glass case. For additional information on these and other coins offered by the Mint of Finland, please visit their website.