The 2014 Florida United Numismatists (FUN) convention was highlighted by the sale of various prime numismatic rarities, first and foremost the finest certified example of the 1787 Brasher Doubloon, sold by Heritage Auctions.

One of the most enigmatic and historical of all United States Coinage, the coin offered was one of only seven Brasher Doubloons known to have survived to the present day and a representative of the only colonial United States gold coin struck for circulation, with regular gold coinage by the United States Mint not produced until 1795, almost a decade later. The coin has been certified by NGC as MS-63, and is the only uncirculated piece certified by either PCGS or NGC. Another uncirculated example was in the Garrett collection but has not been submitted to a grading service for authentication. The other five known examples are circulated. With such specifications, the auction price of $4,582,500.00 (including buyer’s premium) was certainly warranted. 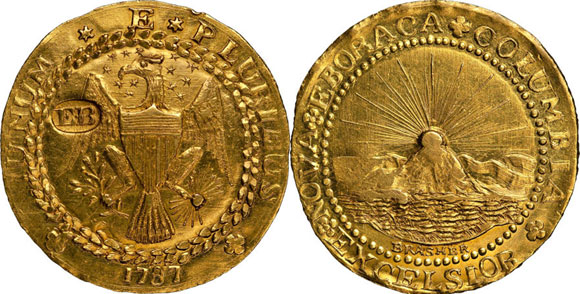 A full and excellent history of the coin and it’s maker, Ephraim Brasher, can be found in the auction catalog and on the website of Heritage Auctions. Brasher was a New York native and silversmith who worked in Manhattan and lived close by on Cherry Street in New York City, with George Washington and as his neighbor in the 1780’s. Brasher and Washington were well acquainted, and to this day silverware hallmarked “EB” can be found in the collection of the White House, including the original receipts. This hallmark, the capital letters “EB” in an oval can also be found on various world gold coins of this period. It appears that Brasher was a proficient assayer as well and that counterstamped coins that he had tested circulated at full value.

Besides assaying and regulating (as the practice is called) foreign gold coins Brasher also produced a very limited number of gold coins from scratch, initially copying the design of the well accepted 8 Escudos struck in Lima, Peru, which he stamped with his own hallmark. The design of this piece is virtually identical to the original pieces produced by the Spanish Colonial Empire. In 1787 a completely unique gold coin was produced, which was meant to circulate for approximately $15, and employed a design which was totally unique. The coin sold at the Heritage Auction was the finest example of this issue. The obverse (or reverse depending on who you ask) is rather similar to the reverse of the 1788 Massachusetts Cents, and was adapted from the Great Seal of the United States. Near the rim is the motto E PLURIBUS UNUM. Many elements that are still seen on United States coinage to this day are seen, including thirteen stars, an olive branch, and of course the aforementioned Eagle. The date is found directly below the eagle at 6 o’clock.

The reverse shows a sun rising from behind a number of mountain peaks as the central design within a beaded border. BRASHER is found directly below the mountains, in all capital letters. Around the periphery is the motto NOVA EBORACA COLUMBIA EXCELSIOR, which translates as NEW YORK AMERICA EVER HIGHER. As the coins were struck only a decade after the American War of Independence the design is obviously very patriotic, which only adds to the allure of these extremely rare examples of the first United States Gold Coinage.

To this date the exact purpose of the gold coins produced by Brasher is unknown. While in the past some have considered them to be patterns, the fact that most show signs of circulation and that the example in the Mint Cabinet is known to have been pulled from circulation in the 1830’s seem to indicate that Brasher did indeed these coins to circulate. The example sold at the FUN auction has Brasher’s hallmark punched on the eagle’s right (viewer’s left) wing, as do five other known examples. A single other Brasher Doubloon has the hallmark punched on the eagle’s left, but it is unknown if this was done on purpose and if so for what reason.

The coin that sold at the FUN auction can be considered to be one of the most important rarities in American Numismatics. The pedigree of the coin goes back to the 1830’s and it has been considered to be the discovery specimen. It last sold in 1979 to Walter Perschke, who consigned the coin to the Heritage Auction. When last sold it realized $430,000, certainly an amount that seems to be a bargain after the most recent auction, and a numismatic investment that has proven to have done very well. Of course we don’t know if the coin will again be off the market for such a long period this time around; but no matter when and where it will reappear on the numismatic market one thing is certain: when it’s reappears it will once more be touted as one of the most historical coins ever struck in the United States.