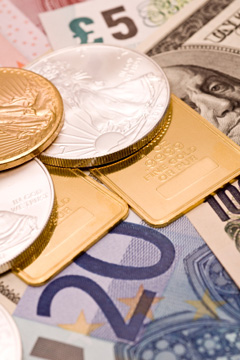 A good case can be made that global finances suffered its worst Thanksgiving week since 1932. The Standard & Poor’s 500 fell 4.7% last week, which is its worst performance for this special week in the last 79 years.

The Dow Jones Industrial Average fell by 4.85%, which was not a record result for Thanksgiving week, but still terrible news.

Over the course of last week, government debt credit ratings were reduced for Portugal (by Fitch from BB+ to BBB- with a negative outlook), Hungary (by Moody’s to “junk” status of Ba1), and Belgium (by Standard and Poor’s from AA+ to AA).

So many people are fleeing the Euro that European banks seeking to obtain US dollars were paying as much as 1.61% above the exchange rate in order to unload their Euros. That was the greatest differential since 2008. Banks could get a more favorable rate by conducting their transactions with the European Central Bank, but such transactions would be publicly disclosed and be considered a sign of financial weakness by any bank making such a swap.

Some marginal European banks were simply unable to find a source willing to do an exchange with them, no matter what the differential.

In particular, Greek shipping magnates are moving as much of their cash and paper assets out of Euros and are also physically moving their paper assets outside of the Eurozone, mostly going to London.

In effect, the value of the Euro is now on a two-tier system. If you are trading within the Euro nations, it has one value. If you want to dispose of Euros and receive other currencies, especially the US dollar, the Euro is worth a lower rate.

Trading in international markets last week generally reflected the expectation that Greece, Portugal, and Ireland will soon abandon or be pushed out of the Eurozone.

The European Union released an estimate that banks will need to add $109 billion in new capital in order to survive the current financial woes. Bank industry insiders predict that the correct figure is much higher. No matter which figure is accurate, where will such funds come from?

Also last week, Russia, Kazakhstan, Colombia, Belarus, and Mexico disclosed that they added gold reserves during the month of October.

Last Monday the Commodity Futures Trading Commission announced that it was seeking public comments that would allow brokerages to seek customer permission to commingle customer and brokerage assets. See the news release at http://www.cftc.gov/PressRoom/PressReleases/pr6145-11.

I am extremely surprised to see this proposal, especially so soon after it looks like MF Global Holdings effectively stole customer accounts through commingling their assets with those of the firm. This regulatory change would allow brokers to use customer assets to help manage massive customer withdrawals if there were some danger that the broker was heading toward bankruptcy. This proposal, as I understand it, is strictly an attempt to benefit the brokers and harm the interest of the customers of brokerage houses.

The failure of the German auction could be a true signal of how close the European financial markets are to collapse. If the strongest economy in the continent does not merit sufficient investor confidence to be able to sell a modest quantity of bonds, what does that tell you about how much more weakness there is in the rest of Europe?

There are at least a few analysts that suspect that the Germans arranged this auction specifically so that it would fail. The reason for doing so would be to gain leverage for the Germans to resist being pressured to further subsidize other European nations. I don’t think it really matters whether the German auction was a market failure or was rigged to fail. The important point is that the financial problems across Europe are getting worse, literally every single day.

There just isn’t enough space to recount all the financial woes that hit the US markets last week. Suffice it to say that major US banks are in shaky condition and are losing further ground every day.

As I warned eleven days ago, there was a significant possibility that gold and silver prices would drop early last week, which did occur. However, I am still confident that this drop will be temporary.

A new reason for optimism for higher gold and silver prices occurred last week when Sprott Asset Management announced that it had filed paperwork with the government seeking to raise investor funding of Canadian $1.5 billion in order to purchase physical silver.

When the Sprott Physical Silver Trust first made a purchase of about $575 million, it acquired about 20 million ounces of physical silver. It took months for the sellers to deliver the silver, with Eric Sprott estimating that perhaps half of the silver that was delivered had not yet been mined on the date that the sellers made their sale. Assuming that government approval is secured and sufficient investor funds are received, this new purchase would happen sometime in 2012. At current prices, it would represent a purchase of more than 45 million ounces of physical silver. This huge demand for physical silver would almost certainly start pushing up the price well before the actual purchase was made.

Also last week, the Royal Canadian Mint announced that it had received $600 million from investors in its new physical gold fund. Those funds will be spent to purchase physical gold in the near future. Expect gold prices to get a nice boost when that event happens.

I have previously stated that I expect the price of gold to top $2,000 by May 2012 at the latest and for silver to reach at least $60 by that time frame. Those forecasts may prove to be conservative.