The Perth Mint has released the final coin within the Animal Athletes $1 Coin series, which showcases animals with amazing abilities which may resemble sports that human athletes compete in. The six collectible Australian $1 coins are designed to inspire and excite children’s interest in coin collecting. 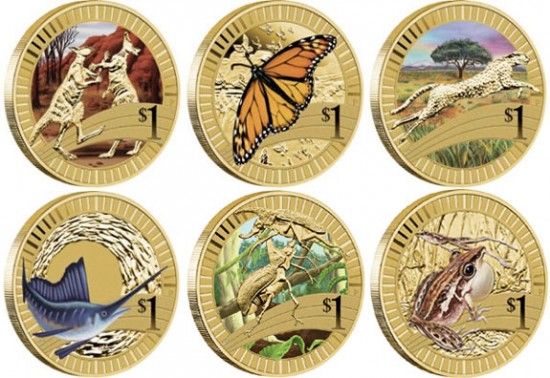 The final coin of the series features the Rocket Frog and went on sale October 2, 2012. The Rocket Frog has long and powerful legs that can carry the little amphibian to leaps of four meters compared to its five centimeter size. If the Rocket Frog were human, it would be able to jump around eighty times its own height.

The legal tender $1 coin features an image of the Rocket Frog against a color background in its natural habitat. The obverse features the Ian Rank-Broadley effigy of Queen Elizabeth II, with the “2012” date and the “1 Dollar” denomination.

The previous releases of the series have featured the Kangaroo, Monarch Butterfly, Cheetah, Sailfish, and Rhinoceros Beetle. Each coin is struck in aluminum bronze with a weight of 13.80 mm. The diameter is 30.60 mm and the thickness is 3.10 mm. Each coin comes on an illustrated presentation card which folds out to provide illustrations and information about each animal.

All six coins of the Young Collectors Animal Athletes series remain available for sale. For additional information or to place an order, please visit the Perth Mint’s website.