The Mint of Austria have launched (25th October) their latest and final gold coin which features the various Hapsburg and Imperial Austrian crowns from the Imperial collection. This coin, which is available from the 12th November, features the magnificent Imperial Crown of Austria, symbolic of Emperor Francis Joseph I (1830 – 1916) during his long reign of almost 68 years.

The crown itself, now housed in the Imperial Treasury or Schatzkammer located in the Imperial Palace in the center of the city of Vienna – was crafted by Jan Vermeyen of Antwerp  in 1602 during the reign of Emperor Rudolf II and was his personal crown. Consisting of three parts – a circle, a high arch and a mitre, the base or the circle includes 8 lilies and as an important reflection of the Crown of the Holy Roman Empire, there are 8 panels. The high arch of the Imperial Austrian Crown also mirrors the high arch of the Holy Roman Empire Crown. The base of the Austrian Imperial crown is very intricately crafted and set with many precious stones such as zircons and pearls.  The mitre consists of two halves, which are intricately engraved and decorated with fine enameled bands of birds and plants. The two halves are delicately engraved with four different scenes representing key moments in the life of Rudolf II.  From the halves and in the middle of the crown the high arch rises, set with 8 diamonds and an emerald at the top to symbolize heaven.

Fortunately for history, this spectacular crown was not dismantled after the death of Rudolf II but succeeded to exist in regal splendor to this day. The Habsburg dynasty, which ruled the Austro-Hungarian Empire for more than 800 years, did not believe that coronations were necessary because it was a hereditary right. The Imperial Crown and the robes were used only for the ceremonial investiture rather than a coronation. The Imperial State Crown was also included on the Emperor’s last coinage when it was clearly depicted on the one corona coin from 1912 to 1916. 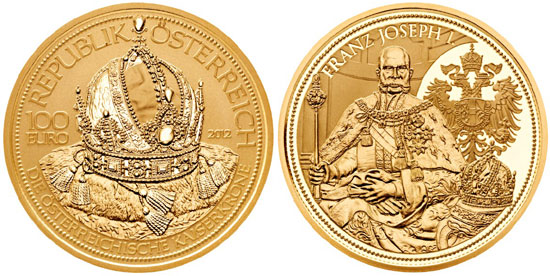 The obverse of the coin, intricately designed by the Austrian Mint’s chief engraver Thomas Pesendorfer depicts the crown on a cushion as it might be displayed during an investiture ceremony. Above the primary focus is the text “REPUBLIK OESTERREICH” (Republic of Austria) with the text below along the rim “DIE OESTERREICHISCHE KAISERKRONE” (Austrian Imperial Crown). To the left of the crown is the coin’s face value of 100 EURO and the year of issue “2012” is seen to the right. The reverse was engraved by mint engraver Helmut Andexlinger who included a rendition of a well-known painting of the Emperor adorned in ermine and holding a scepter in his right hand along with the Imperial crest positioned to the right of the portrait. The crown itself is placed just to the Emperor’s left. Though the detail of both the portrait and crest is very intricate, it can be very well seen and appreciated especially with the proof strike. The text “FRANZ JOSEPH I” is included to the upper left rim.

Struck to a precise proof quality, the coin is minted in .986 fine gold with a weight of 16 grams and a diameter of 30 mm. A mintage of 30,000 pieces has been authorized. The first coin in the series of five coins was originally issued in 2008.

For more information on this and other coins offered by the Austrian Mint, please visit their website at: http://www.muenzeoesterreich.at/eng/Filter/View/?bereich=Sammeln&produkt=true&serie=Kronen%20der%20Habsburger Orders currently being accepted – international orders fulfilled.