The Perth Mint has released the final coin within the Australian Sea Life II collector series. The coin featuring the Manta Ray completes the program inspired by the unique creatures that inhabit Australia’s coral reefs, which has also featured the Hawksbill Turtle, Starfish, Surgeonfish, and Octopus. 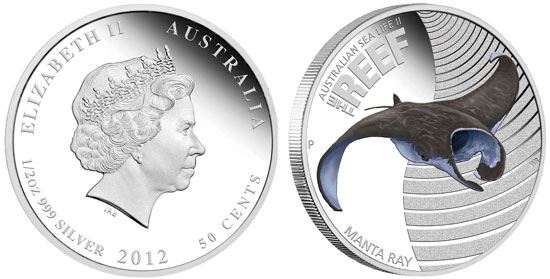 The Manta Ray is one of the largest marine species on the Great Barrier Reef, reported to grow up to five meters in width and weigh several hundred kilograms. The 99.9% pure 1/2 ounce silver coin is struck to proof quality and features a realistic portrayal of the creature in color. The inscriptions read “Australia Sea Life II The Reef” and “Manta Ray” along with the Perth Mint’s “P” mint mark.

The obverse of the coin carries the Ian Rank-Broadley effigy of Queen Elizabeth II. Inscriptions indicate the weight and purity of the silver content, the legal tender face value, and the “2012” date.

This release has a limited mintage of 10,000 coins and is housed in a display case with a colored coral reef shipper, which joins with the other shippers in the series to create a complete underwater scene. A numbered certificate of authenticity accompanies each coin.

All five releases of the Australian Sea Life II series can be found here on the Perth Mint’s website.