The Royal Dutch Mint have launched (4th April) their final set of proof coins minted under the reign of Queen Beatrix (reigned 1980 – 2013). On the 30th April, the Queen formally abdicates as Dutch Head of State in favor of her eldest son, the Prince of Orange who will assume the throne as King Willem-Alexander on that day, the first King in the Netherlands for more than 120 years.

The set includes the current 8 coins presently in circulation in the Netherlands, the €2 down to the one cent coins and will also include a second €2 commemorative coin as the Netherlands celebrates 200 years as an independent kingdom since 1813. The coin will feature a design which celebrates this historic anniversary – yet to be officially launched. The theme of this new proof set also includes information for the Royal Palace in Amsterdam, situated in Dam Square and where the formal proclamation of the succession & investiture of Prince Willem-Alexander will be made on the 30th April. The nine coin set is housed in a special presentation case designed for the occasion. 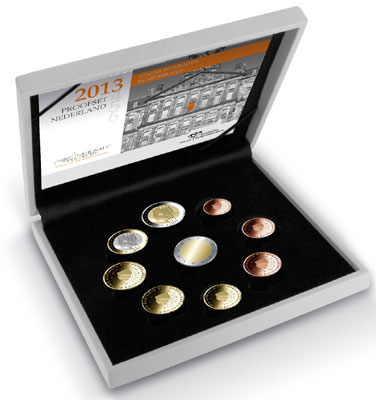 €URO coins were issued in the Netherlands on the 1st January 2002 but have been produced since 1999, this set will be the Euro’s 14th year produced under the reign of Queen Beatrix who succeeded to the throne on the abdication of her mother, Queen Juliana (1909 – 2004) in 1980. The avant-garde and modern interpretation of the Queens portrait introduced in 1982 transitioned onto EURO coins with the half portrait being depicted on the 2 & 1 Euro coins and the complete portrait seen on the remaining denominations. Designed by Evelino Fingal, a native of Aruba, the three-tiered or level depiction of the Queen with her profile facing to the left was considered one of the best examples of modern coin design of all time. It is expected that the coins carrying the portrait of the new King will debut in 2014.

For more information on this and other coins offered by the Royal Dutch Mint, please visit their website at: http://www.knm.nl/Proofset-Nederland-2013/nl/product/3280/?utm_source=TripolisDialogue&utm_medium=email&utm_term=&utm_content=nieuwsbriefalgemeentmg&utm_campaign=20130404_nieuwsbrief&opbrengst=100 Information is offered in Dutch, European destination orders only are fulfilled.