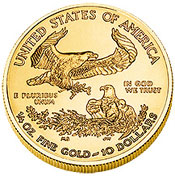 These bullion coins are not sold directly to the public, but are distributed through the US Mint’s network of authorized bullion purchasers, who resell the coins to other bullion dealers and the public. Orders will be subject to an rationing process, which will allocate the limited number of available coins.

The first batch of fractional Gold Eagles went on sale December 3, 2009. The available coins were quickly snapped up by bullion dealers, depleting the entire inventory of one-tenth ounce coins and purchasing enough of the one-half and one-quarter ounce to reduce the inventory to limited status. Fractional weight gold bullion coins had not been offered by the United States Mint for nearly an entire year, as they focused their production on one ounce coins.

The US Mint also announced that they would resume sales of the one-ounce 2009 American Gold Eagle bullion coin on December 15. The coins had been suspended on November 25, 2009 “due to continued strong demand.” The one ounce gold bullion coins will be available to authorized purchasers weekly until the end of the year. The rationing process is in effect for these coins as well.