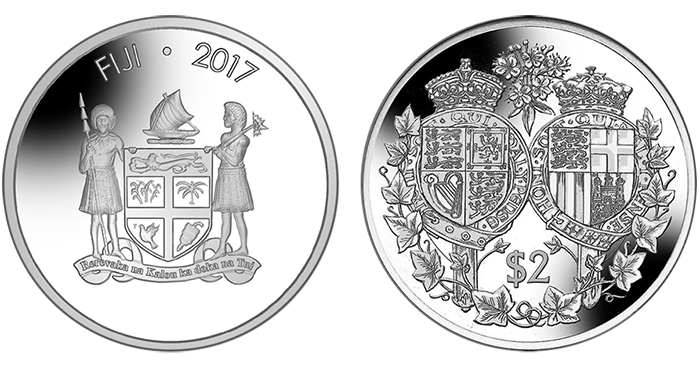 The Reserve Bank of Fiji have issued (21st July) a new silver crown coin which marks the 70th (or platinum) wedding anniversary of Queen Elizabeth II and HRH Prince Philip, who have had an astonishing life together and have dedicated their lives to the duty of monarchy. From independence in 1970 until 1987, the Queen headed the Fijian monarchy, which was replaced with a constitutional Republic thereafter. Fiji is a member of the Commonwealth of Nations and still remains close to the British government.

The design of this new collector coin, marking the platinum wedding anniversary of Fiji’s onetime head of state, utlises the use of the coat of arms of both the Queen and the Duke of Edinburgh. The royal arms we see today have evolved over nine centuries, since Richard the Lionheart chose three lions to represent England. On the 1st January 1801, the royal arms of Great Britain were superseded by those of the United Kingdom of Great Britain and Ireland. This symbol on the king’s shield would immediately identify him in the midst of battle. The full version of the royal coat of arms is now used only by the Queen in her capacity as the sovereign. The Queen has a separate version of her arms for use in Scotland, giving the Scottish elements pride of place. HRH Prince Philip’s coat of arms, granted in 1947 upon his marriage to Princess Elizabeth, represents his lineage as a prince of Greece and Denmark on his paternal side and his descent from the Mountbatten (previously the Battenburg) family on his maternal side. The Duke of Edinburgh’s coat of arms was granted two years later, in 1949, and represents his lineage as a prince of Greece and Denmark and that as the Duke of Edinburgh with the representation of Edinburgh Castle in the lower right corner of the crest. 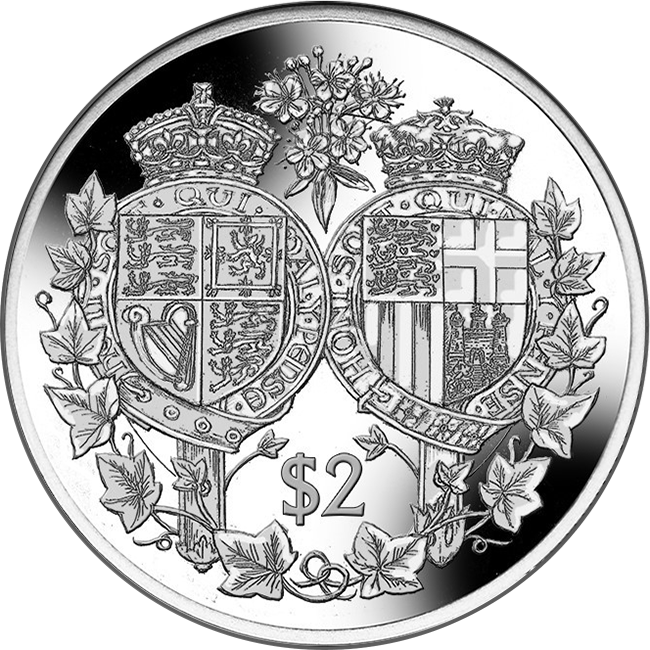 The reverse of the new collector coin unites these two crowned crests with vines of ivy, which represents wedded love and fidelity. Above the crests is a spray of myrtle, which is the Hebrew emblem of marriage. 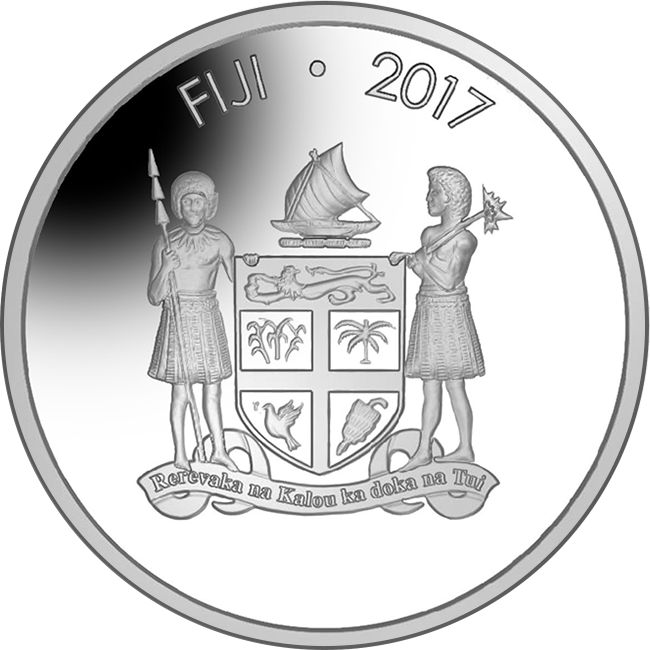 The obverse features the beautifully detailed Fiji coat of arms: a shield divided by the Cross of St. George with a lion at the top holding a cacao pod. The four quarters contain sugarcane, coconut palm, bananas, and a dove. Below the shield is the motto Rerevaka na Kalou ka doka na Tui (Fear God and honor the Queen); above, FIJI and the year of issue, 2017.

The Proof sterling silver coin is individually enclosed in an acrylic capsule for protection and housed in a custom red presentation box with certificate of authenticity. At a later date, to further celebrate this once-in-a-lifetime royal event, the Reserve Bank of Fiji will also issue 650 platinum coins encrusted with diamonds, sharing the same design as the $2 coin but denominated as $10. Please visit the website of the Pobjoy Mint for additional information on this and other coins issued by the government and treasury of Fiji.   ❑