The Royal Mint have announced (25th April) that they have entered into a strategic partnership with A-Mark precious metals & bullion distributors who are headquartered in Santa Monica California US. The new product sees the classic silver Britannia one ounce bullion coin embellished with the figure of a snake – in recognition of the lunar year of the snake – incused on the edge of the coin.

This is the first time any symbol has been added to the popular and widely collected bullion coin and also the first time that this coin has been specially commissioned (including the added feature) for a secondary market outside the UK. 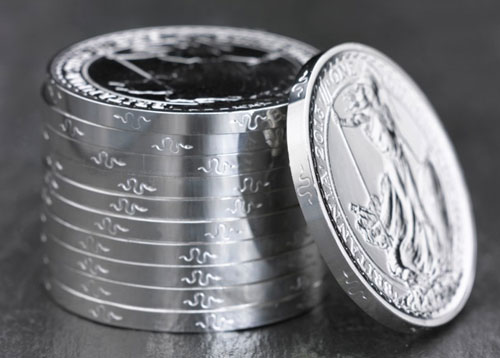 An elegantly-curled figure of a snake appears at intervals around the edge of the coin and continues to depict Philip Nathan’s instantly-recognizable ‘Britannia” reverse design first introduced on the silver version in 1997. The obverse bears the effigy of HM Queen Elizabeth II as sculpted by Ian Rank-Broadley and in use on British and commonwealth coinage since 1998. Both the Royal Mint’s gold and silver Britannia range of bullion coins underwent a significant change this year when their fineness was increased to a purer .999 content- thus, bringing them into line with other leading legal tender bullion coins issued by various national Mints.

The Royal Mint’s 1 ounce Silver ‘year of the Snake’ Britannia coins are available exclusively from A-Mark at www.amark.com. For more information of the coins offered by the Royal Mint, please visit their website at: http://www.royalmint.com/ Information offered in English – international orders fulfilled.