The Royal Dutch Mint has launched (21st September) a special set of Dutch coins assembled to both bid farewell to the coins issued under the reign of Queen Beatrix, as well as mark the last “Queen’s Day” which was celebrated on the 30th April of this year – the very day which the Queen chose to submit her abdication to the Dutch throne after exactly 33 years.

Queen’s Day or as it is known in Dutch, Koninginnedag – was first celebrated as Prinsessedag (Princess’s Day) on the 31st August 1885 which was actually the 5th birthday of the then-Princess Wilhelmina, heiress presumptive to the Dutch throne. It wasn’t until Princess Wilhelmina succeeded to the throne in 1890 that the day was observed as Queen’s Day. The date of the celebration was moved in 1949 to accommodate the birthday of Wilhelmina’s daughter, the new Queen Juliana. When Queen Beatrix succeeded to the throne on the 30th April 1980, she decided to retain the date of Queen’s Day observed by her mother instead of her own birthday which is the 31st January. With the accession of the country’s new King, the day is now known as Koningsdag or King’s day and will fall on his birthday, the 27 April (the 26th if the 27th falls on a Sunday).

The coins included in this specially prepared set are all of the presently circulating EURO coins issued, the €2 through to the one cent coin and also includes a limited edition silver medal struck exclusively for this set. Using a new technique, the medal was produced using the innovative photography technique Minted Photo Image (MPI) and depicts the Queen – now Princess Beatrix with her son King Willem-Alexander as seen in a photograph which was taken on the day of the Queen’s abdication. The folder also includes several images from previous Queen’s Day celebrations over the last 33 years. 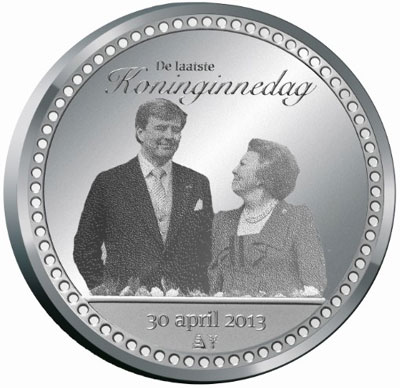 The new set was launched on the 21st September at a special show during Muntmanifestatie in Houten, Netherlands and is available for general purchase from the 23rd September. The Royal Dutch Mint are expecting that this set will sell quickly and advise reserving a set soon to avoid disappointment.

For more information on this and other coins – products available from the Royal Dutch Mint, please visit their website at: http://www.knm.nl/ Information offered in Dutch – orders within Europe fulfilled.