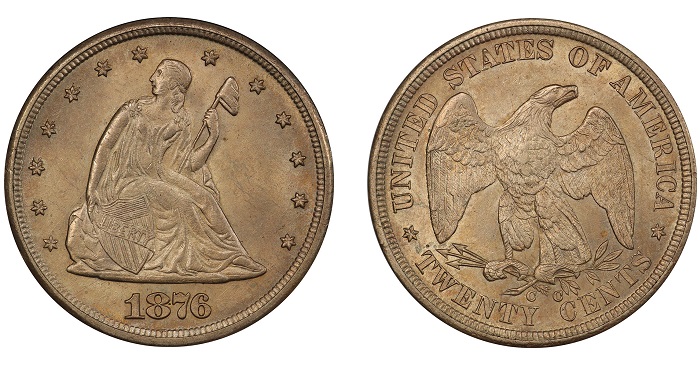 Santa Ana, California — For a long time the 1876-CC 20-cent piece has been recognized as one of the most famous and most desired of all American coins, and the offering of an example attracts great attention in the numismatic community. Not only is it a great rarity with fewer than 20 pieces believed to exist, but it also possesses the added romance that accompanies coins from the historic and short-lived Carson City Mint.

Stack’s Bowers Galleries is pleased to announce that it will be offering a PCGS-graded MS-65 1876-CC20-cent piece in the Rarities Night session of the firm’s Official Auction at the ANA World’s Fair of Money. This example, a featured highlight of the E. Horatio Morgan Collection, will have been off the market for more than three decades when it crosses the auction block on the evening of August 15, 2019, in Rosemont, Illinois. It last appeared as lot 1405 in The 400 Sale held by Stack’s in January 1988, and will be the first Gem 1876-CC 20-cent piece seen on the market since Stack’s Bowers Galleries’ sale of the F.C.C. Boyd specimen in January 2013.

Records reveal that 10,000 1876-CC 20-cent pieces were struck. However, by the time they were produced by the Carson City Mint, the denomination had effectively been rendered obsolete, and apparently, nearly all were melted. The destruction of these coins is probably the subject of the following request written by Mint Director Henry Richard Linderman on May 19, 1877, addressed to James Crawford, superintendent of the Carson City Mint:

You are hereby authorized and directed to melt all 20-cent pieces you have on hand, and you will debit ‘Silver Profit Fund’ with any loss thereon.

In 1876, at the Carson City Mint, selected samples of all coins were set aside for examination by the annual Assay Commission, which met in Philadelphia on Wednesday, February 14, 1877. Presumably, only a few 1876-CC 20-cent pieces were shipped east for the Commission, a group which probably constituted most of the supply available to numismatists. It seems likely that a few were paid out in Nevada in 1876-1877, accounting for a handful of worn and impaired pieces known today.

Perhaps the first 1876-CC 20-cent piece to attract notice in a catalog was in the R. Coulton Davis Collection sale by New York Coin & Stamp Company, January 20-24, 1890. However, the rarity and desirability of the 1876-CC 20-cent piece was first showcased to a wide audience in A.G. Heaton’s 1893 A Treatise on the Coinage of United States Branch Mints. Prior to that time, numismatists had been concerned primarily with dates, and whether a coin had a mint mark or not made little difference. In his text, Heaton mentioned the 1876-CC 20-cent piece in two places, noting in the preface that it was “excessively rare in any condition,” and in the main text the following:

The pieces of 1876-CC have become very rare, as we have mentioned in our preface, from the negligence of Western collectors, or the indifference involved in mintmark rarities.

As noted, today the population of extant 1876-CC 20-cent pieces is believed to be fewer than 20 pieces. The coin to be offered by Stack’s Bowers Galleries in their August 2019 ANA Auction is among the finest graded at PCGS, tied with two other grading events at MS-65, and with only two graded finer at MS-66, not necessarily representing that many different coins.