With November rapidly approaching, it is about time for the fall edition of the Whitman Expo in Baltimore, Maryland, held this year from November 9 to 12. The official auctioneer is Stack’s Bowers, which will hold various auctions during the week of the show. There are a total of ten sessions scheduled, ranging from Numismatic Americana to modern grade rarities. Many of the highlights are offered in session 4, Rarities Night, which we covered in an earlier preview article. In this second preview article, we will take a look at some noteworthy items found in the various other sessions. These are just a few of the several thousand lots offered by Stack’s Bowers in the various sessions. All lots discussed in this article, as well as all other lots that will be crossing the auction block in Baltimore, can be viewed at the website of Stack’s Bowers. 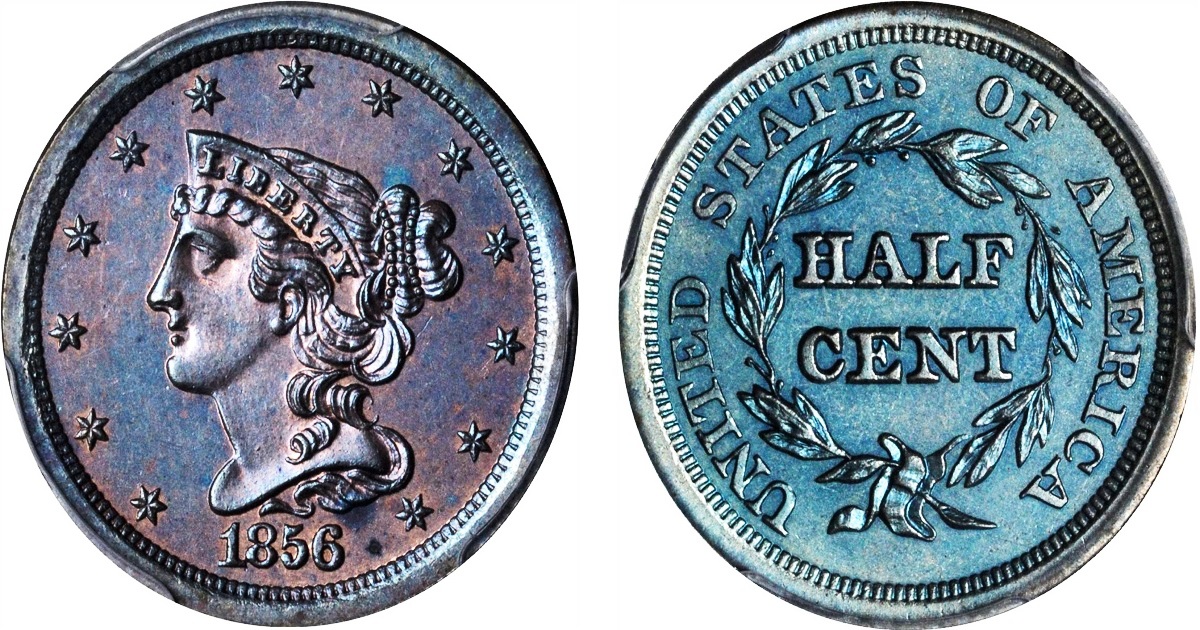 Half cent Proofs of any date are very rare. In fact, one could argue that the denomination is among the rarest in Proof format of the entire U.S. coin series, with the exception of perhaps some of the gold denominations. The reason for this is that the denomination was discontinued before regular production of Proofs started in 1858. Thankfully to modern collectors, the mid-19th-century Mint did not care too much about accuracy, and half cents are known to have been restruck later in Proof format merely to satisfy collector demand. Lot 1011 in session 2 of the Stack’s Bowers Baltimore auction is one of the rare half-cent Proofs, this one dated 1856 and graded PF-64 BN by PCGS (approved by CAC). A scarce coin with an estimated mintage in the low hundreds, this particular example will strongly appeal to collectors as it is struck from the scarcer of just two die varieties known for this date in Proof format. 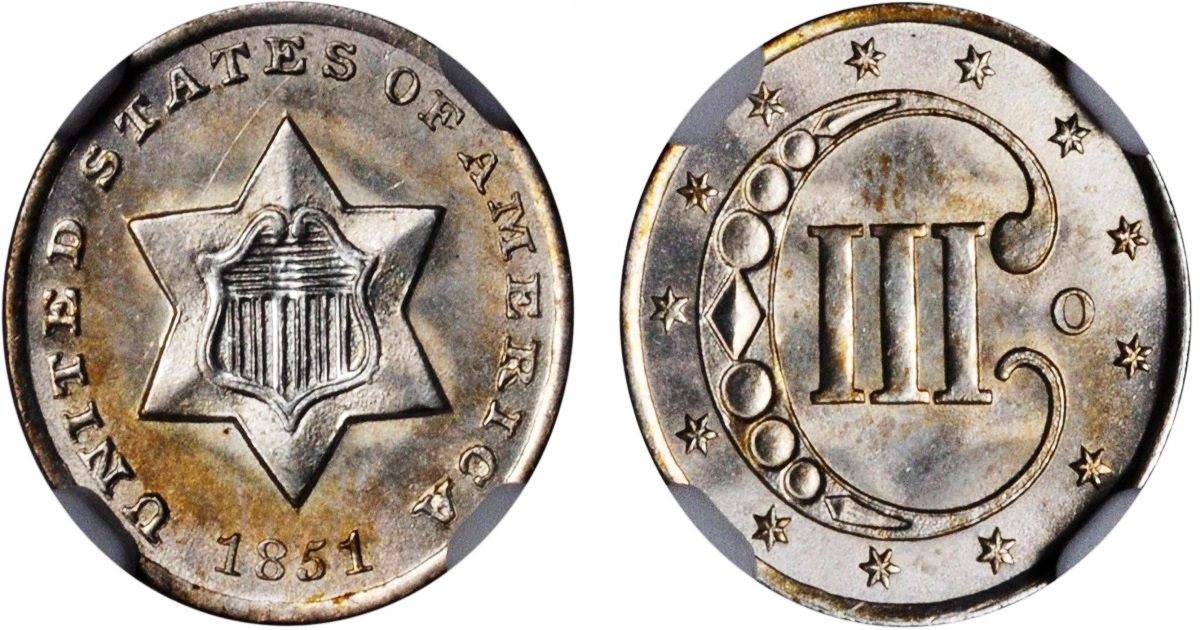 Traditionally the minor denominations (half cents, cents, two-cent pieces, and three-cent pieces) were only struck at the Philadelphia Mint prior to the 20th century, with one exception: the 1851-O silver three cents, struck at the New Orleans Mint. The only 19th-century piece of minor coinage struck at a branch mint, this issue saw a mintage of 720,000 coins, and collectors can usually find a circulated piece with little effort. At the higher Mint State levels, however, this coin becomes a different story, and it is very difficult to find in Gem Uncirculated condition. Lot 1204 is such a Gem, graded MS-66 by NGC and is among the finest certified by either of the major grading services. An important coin for a collector of New Orleans coinage, it is among the top of the NGC census, surpassed by just two finer examples. 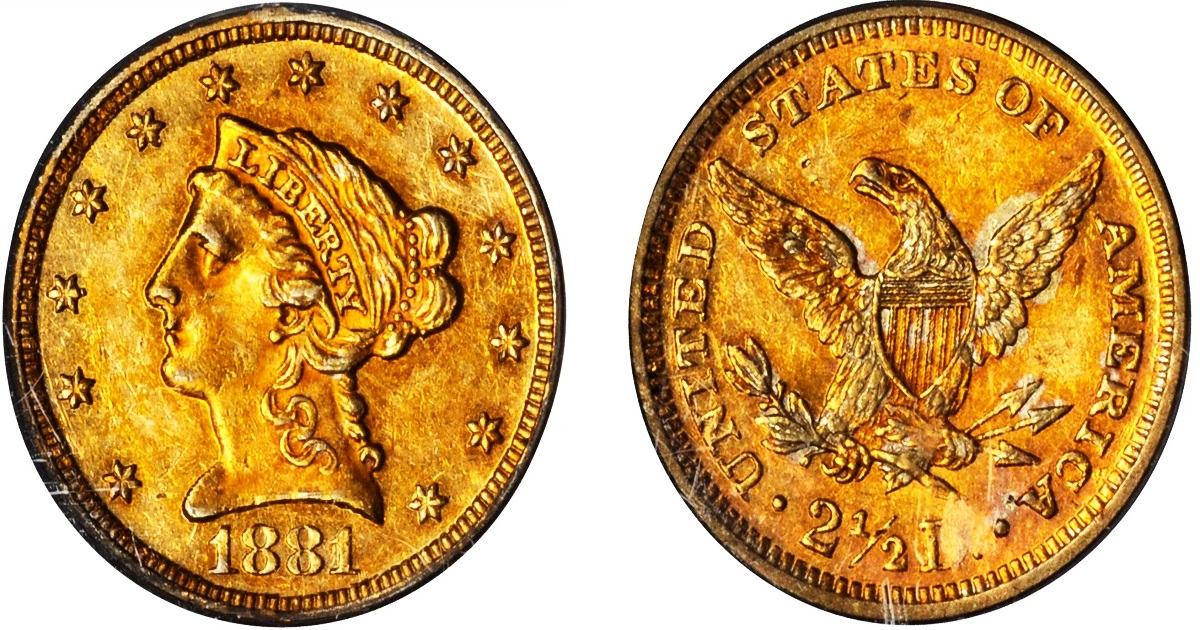 When discussing scarce quarter eagles, attention usually goes to the coins from the Charlotte and Dahlonega mints, struck in limited quantities prior to the American Civil War. However, some of the later issues from the Philadelphia Mint had even lower mintages, and are very scarce to even rare as a result. The 1881 quarter eagle is such a coin, and lot 2027 in the Stack’s Bowers auction offers a PCGS AU-55 graded example of this rare coin. That year, the Philadelphia Mint struck just 640 coins for circulation, plus a total of 51 Proofs, which were sufficient to satisfy collector demand. The very limited number of circulation strikes were quietly released into circulation and did not catch the attention from numismatists until many years later. Fewer than 100 coins are estimated to have survived in all grades, and this is one of the scarcest of all 19th-century American gold coins. 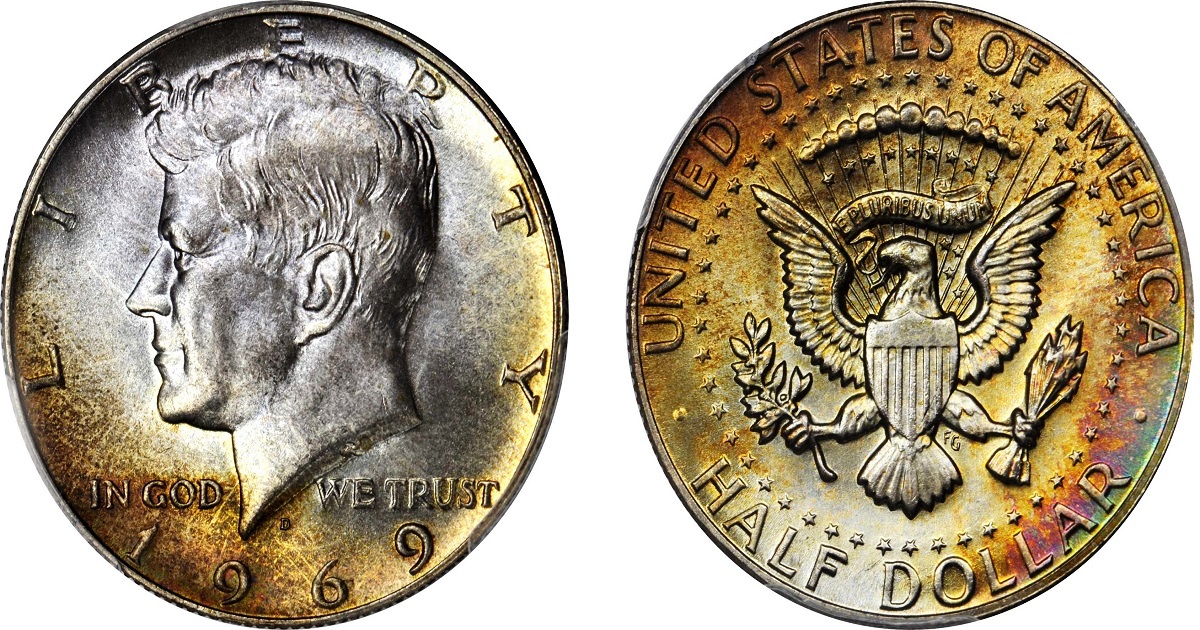 Kennedy half dollars were introduced shortly after the assassination of President Kennedy, and since 1964 were struck for circulation every year through 2001. Since 2002, circulation and Proof strikes, including silver Proofs, have been struck for the collector market but not released for general circulation. Even though they very rarely circulate in American commerce these days, they still have a loyal collector following, and some of the earlier dates are very rare in higher grades. Lot 3214 in the Stack’s Bowers auction is such a condition rarity, a 1969-D Kennedy half dollar graded MS-67 by PCGS. While not a rare coin by any standards (almost 130 million pieces were struck for circulation), it becomes very difficult to find at this grade level, with just 20 pieces certified by PCGS in MS-67 — and just a single piece is graded finer (MS-67+). Most Uncirculated survivors show heavy marks, even those from Mint sets, and finding a mark-free example with good eye-appeal is very difficult, as the population figures attest. With the PCGS registry very popular with Kennedy collectors, this coin will receive a great deal of attention when it comes up for auction. 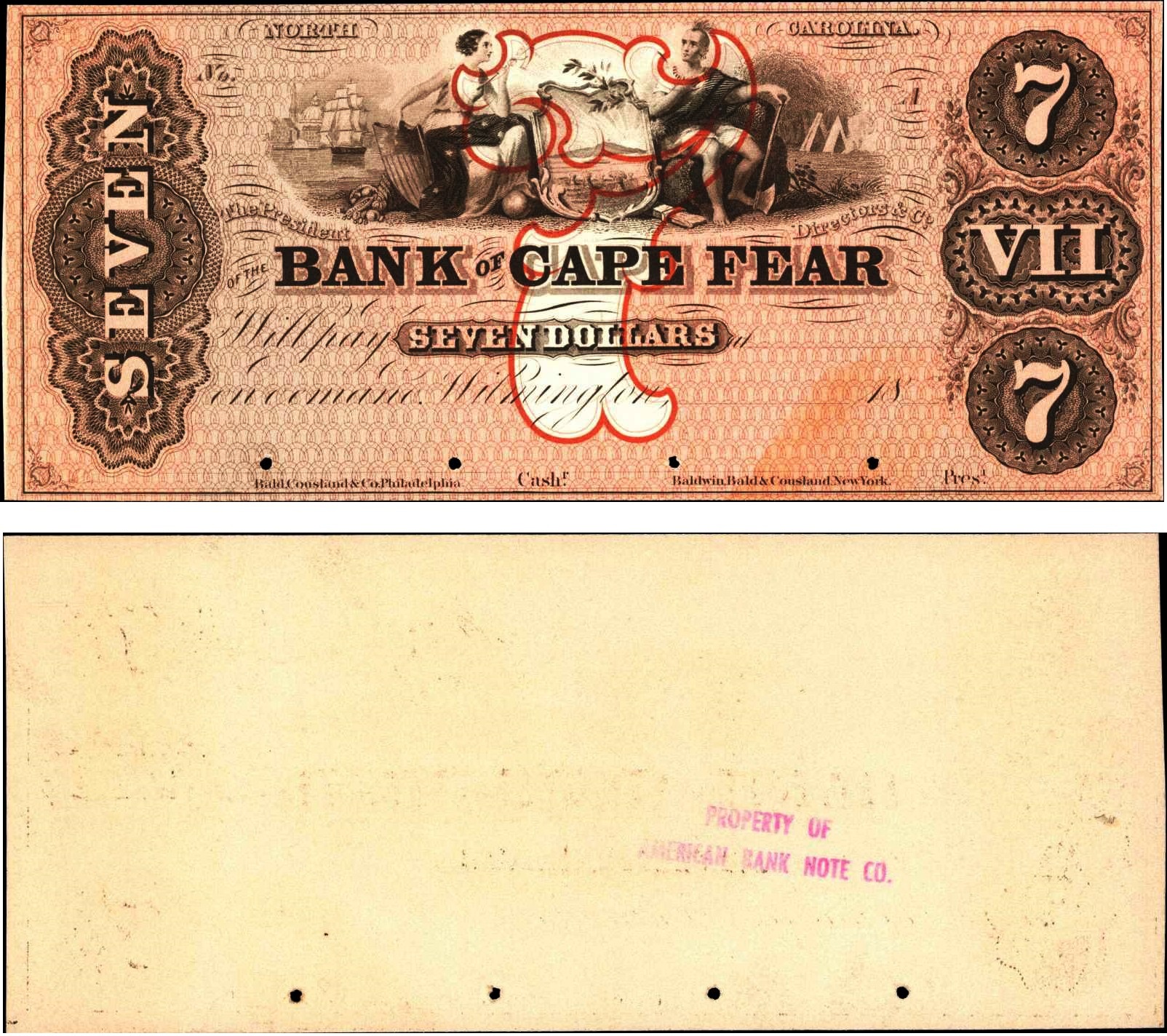 The final two lots we will take a look at hail from the U.S. currency auction (session 3). Lots 20084 and 20085 are two odd-denomination Proofs on India paper (a type of very thin, high-quality paper) from the Bank of Cape Fear in Wilmington, North Carolina. Part of the obsolete currency series, the first is a $7 bank note, while the second is an $8 bank note. 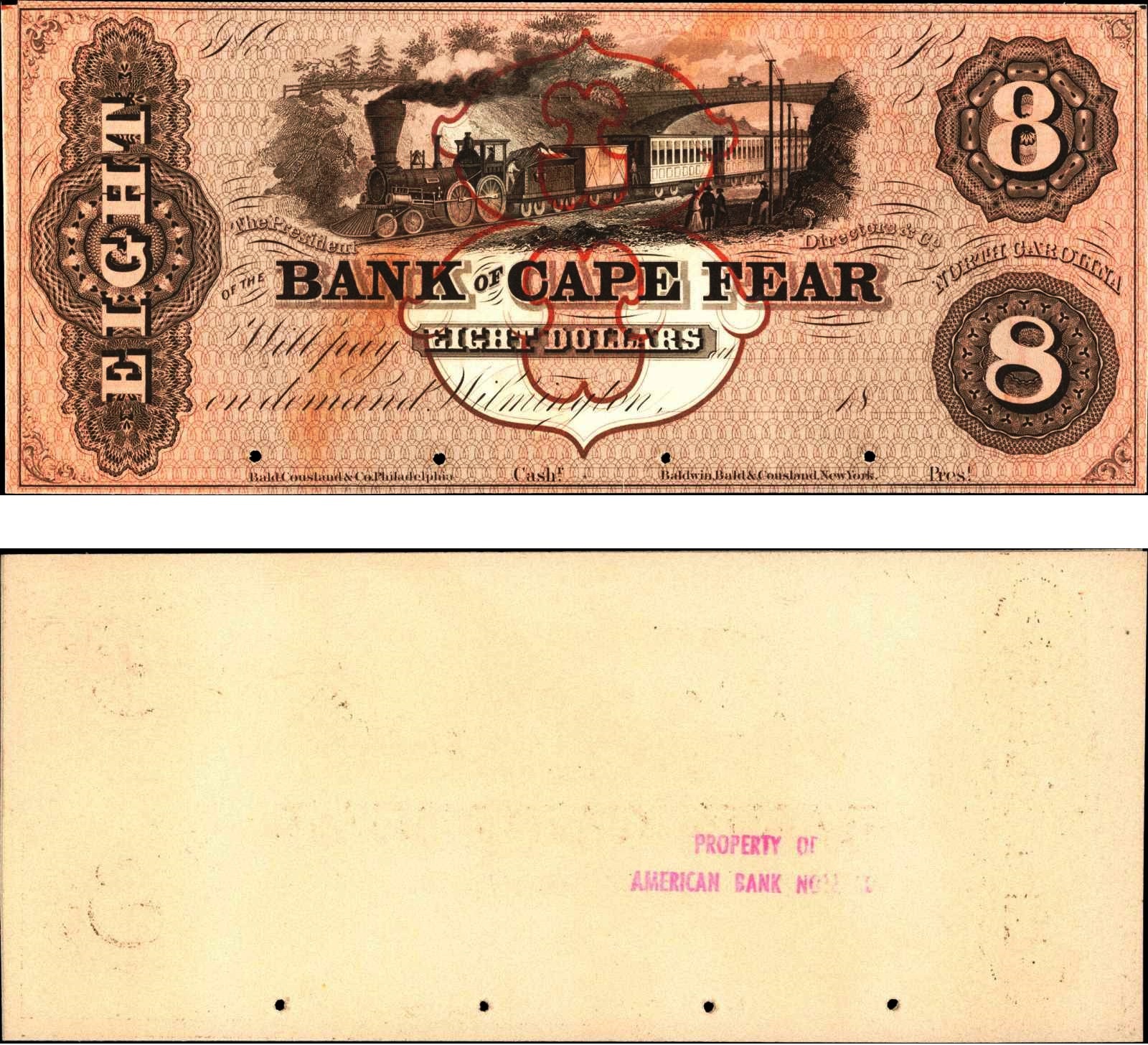 Both are odd denominations that, while not unique for obsolete bank notes, are still very unusual, and the general public is usually not aware that such denominations were at one point circulating within the United States.  These Proofs were printed by the American Banknote Company and were probably sold as part of their archives in the 1990s. The Bank of Cape Fear, the first bank incorporated in North Carolina, was chartered in 1804 and operated until 1866. The bank also issued other odd denominations, such as $3, $4, $6, and $9 bank notes, along with more conventional denominations, all of which are very popular with collectors of obsolete bank notes.