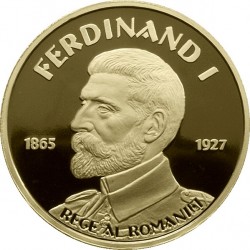 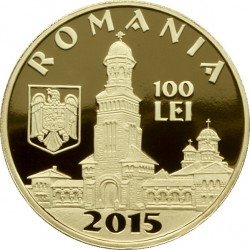 The National Bank of Romania has issued three new coins dedicated to the 150th anniversary of birth of one of Romania’s more outstanding kings, Ferdinand I. King Ferdinand is most remembered as the King who increased Romania’s territory significantly by negotiating with the Central Powers after their loss in the First World War. Born on the August 24, 1865, in the former the principality of Hohenzollern-Sigmaringen within the German Empire, he was the son of Leopold, Prince of Hohenzollern-Sigmaringen, and the Infanta Antónia of Portugal, the daughter of Queen Maria II of Portugal. Prince Ferdinand was a nephew of the newly appointed Prince, or “Domnul,” of Romania, Prince Karl – now known as Carol I, who entered the capital of Bucharest only one year after his nephew’s birth. As Romania was still a protectorate within the Ottoman Empire, independence was eventually declared by Prince Carol in March 1881 after the Russo-Turkish war, in which Romania had fought. The Prince declared Romania’s independence as a result of Turkey’s loss and was then proclaimed King by the Romanian parliament that same month. As King Carol I had no sons, his elder brother, father of Prince Ferdinand, was designated the King’s heir but renounced his place in the Romanian Princely succession in 1880, as did his eldest son, Prince Wilhelm, in 1886, leaving Ferdinand as the most logical heir to the Romanian throne. As Prince Leopold died in 1905, he predeceased his younger brother, the King, and Prince Ferdinand would have been recognized as King Carol’s heir apparent in any event. He was officially recognized by the Romanian government as heir apparent in 1889. Soon after, at the age of twenty-four, he arrived in Bucharest to take up his new position as Crown Prince.

In 1893, Ferdinand had married a distant cousin, the Princess Marie of Edinburgh, daughter of HRH Prince Alfred, Duke of Edinburgh. The young Princess of Edinburgh had originally been intended as a bride to her first cousin, Prince George, the Duke of York, who later became King George V of Great Britain, but she did not return his affections. Princess Marie was considered one of the most beautiful women of her time. Vivacious, accomplished, even theatrical, she immersed herself in both her new role as Crown Princess and in Romanian life. Unfortunately, Ferdinand and Marie were unsuited as a couple, and although five children were born to their union, they lived separate lives for many years after their marriage. 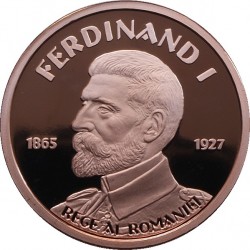 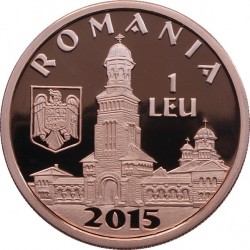 Prince Ferdinand succeeded his uncle as King of Romania in October 1914, just months after the assassination of Austria’s Crown Prince Ferdinand in the city of Sarajevo. The time could not have been worse for this mild-mannered man who would be called upon to lead his country through what was once called the war to end all wars. King Ferdinand, who was a close relation to the German Kaiser Wilhelm II, served as a both a symbol of resolute courage and of unity for Romania, despite his German heritage. As he was viewed as disloyal to the Hohenzollern dynasty by Kaiser Wilhelm II, any reference to Ferdinand’s name was removed from the Imperial register of the house – which actually served to endear him to the people of Romania now referring to their King as “Ferdinand the Loyal”. His wife Queen Marie and the couple’s children organized many hospitals and convalescence centers. As a result of Romania entering the war on the side of the “Triple Entente” consisting of Great Britain, France, and Russia against the forces of the German Empire, Italy, and Austria-Hungary, Romania’s land mass increased considerably. The outcome of Romania’s fighting was the union of Bessarabia, Bukovina, and Transylvania with the Kingdom of Romania in 1918. Ferdinand became the ruler of a much increased territory in 1918-1920, following the Entente’s victory over the Central Powers and the ceding of these territories from its neighbors to Bucharest.

King Ferdinand’s reign came to an early and unexpected end. He died in 1927 at the age of sixty-one after a reign of only thirteen years. When his heir, Crown Prince Carol, left his wife, Crown Princess Helen of Greece, to take a mistress whom he eventually married, the succession skipped a generation and King Ferdinand I was succeeded by his grandson, Prince Michael, who became Romania’s third King at the age of six. The reign of this young king was also to end prematurely as his father, Crown Prince Carol, un-seated his own son and claimed the Romanian throne for himself in 1930 in a coup supported by the country’s Prime Minister. The newly proclaimed King Carol II reigned until 1940 when he was overthrown and replaced by the former King Michael, now nineteen years old. After the end of the Second World War, King Michael I was forced to abdicate by the newly installed and soviet-supported communist government. Michael I went into exile, but returned in a triumphant though politically sensitive visit to Bucharest in December of 1990. He had not set foot on Romanian soil for more than forty-three years. The visit lasted only twenty-four hours, but in 1997 the democratically elected government restored Michael’s Romanian citizenship and he has divided his time between Romania and Switzerland ever since. 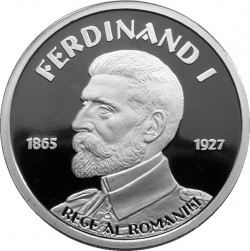 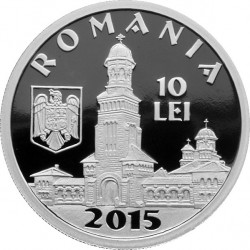 Struck by the Monetăria Statului, or State Mint of Romania, the three coins in the set share the same obverse and reverse designs. The obverse coin includes a profile head and shoulders portrait of HM King Ferdinand I, along with the text “FERDINAND I” above the portrait. The years “1865 – 1927” are seen on either side of the portrait. The text “REGE AL ROMANIEI” (King of Romania) is placed under the portrait in incused letters. The reverse includes an image of the bell tower of the Coronation Cathedral in Alba Iulia, where the coronation of both King Ferdinand and Queen Marie took place in 1922. The text “ROMANIA” is placed above the principal design, and the crest of the state and the coin’s denomination are placed on either side of the Bell tower. The year of issue, “2015,” is seen under the tower in incused numbers.

The coins are accompanied by leaflets featuring a presentation of the numismatic issue in Romanian, English, and French. Each leaflet comes with a certificate of authenticity bearing the signatures of the Governor and the Chief Cashier of the National Bank of Romania. The gold and copper-plated coins are only available in the three-coin set, while the silver coin is available separately. For more information on this and other coins issued by the National Bank of Romania, please visit their website. No information is available for ordering instructions outside Romania.