It seems that every auction held by the Geneva auction house Numismatica Genevensis is fit to set new records. In 2008, for example, the most expensive Roman coin to date was sold here for 2 million francs! And even in 2012, NGSA has managed to assemble a truly massive display of exceptional coins in its catalogue.

Let’s be clear on something right off the bat – there’s no text in the world that could possibly do adequate justice to this incredible offering of rare coins of the highest quality. The attractions are so many and come at you so quickly that we can only highlight a fraction of them. A few key notes should be enough to get us started, like the Greek coins from the Herbert Cahn Collection, a complete series of the first 56 Umayyad gold dinars from 77 AH to 132 AH, and large sections of the Huntington Collection – the siege coins, the Netherlands, Besançon, the German States and the rest of the world, a series of types of payment from Annam, a collection of US coins – as well as US-American coins from the doublets of the ANS. All this, and we haven’t even touched on the many rarities from individual areas! 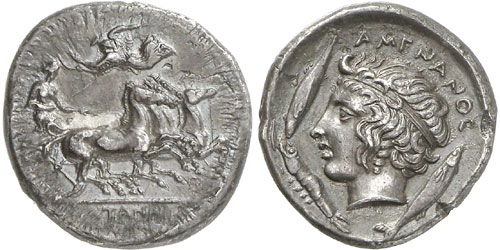 Many collectors will be thrilled to finally get an opportunity to see the Greek coins from the Herbert Cahn collection. Herbert A. Cahn, along with being a founding member of Coins and Medals AG / Basel and the H.A.C. Gallery of Ancient Art and an important archaeologist and professor of Archaeology at both the University of Heidelberg and the University of Freiburg, was also a collector. In 1998, his collection of European portrait coins was auctioned of to overwhelming success. Even more interest is anticipated for the Greek coins, which were Cahn’s primary interest.

Each and every piece on offer is also distinguished, of course, by the sovereign die-cut. After all, the archaeologist almost had a sixth sense when it came to fine craftsmanship and artistry, a talent evidenced by such items as a tetradrachm from Camarina that was once part of the Käppeli Collection. Or take, for instance, a marvellous tetradrachm from Gela, once part of both the Numismatic Collection of Gotha and the Käppeli Collection, or a tetradrachm from Amphipolis, sold in 1921 as part of the Engel-Gros Collection. If I could go into detail about the numerous captivating fractions in perfect condition, I would, but they would likely warrant a whole report unto themselves! We still need to get into the ancient coins of other ownership!

A small section of Celtic coins really impresses with their amazing quality and the modernity of their die-cut. We’re used to seeing this kind of thing with the staters of the Parisii, but even the council pieces from England demonstrate a completely new artistic dimension when they’re in such perfect condition. This renewed awe for artistry extends to the Greek coins too – sure, we’ve seen the Thraco-Macedonian staters once linked to a mint called “Lete” quite a few times before – but in this amazing condition, the coin transforms into a veritable work of art! It’s no surprise that the piece was part of the Weber, Spencer Churchill and Kunstfreund Collections. And these are just a couple of examples of the many incredible pedigrees of the coins on offer. There are many prestigious collections represented here.

It’s likely that new records will be set this time around too, perhaps with the sale of the most expensive cistophor in the history of coins. Numismatica Genevensis is offering this most attractive piece of the entire issue, but definitely not at a bargain price – the piece is estimated at 10,000 francs. Those who might find that slightly out of their price range can opt instead for one of the two extremely fine cistophors that follow shortly after, both offered at 800 francs.

The section of Roman coins also offers up exclusive and outstanding quality, whether it’s the republic, imperatorial stampings or the amazing aureii, denarii and bronzes that were minted during the Roman Imperial Era.

Take, for example, the finest sestertius of Caligula that has ever existed – its reverse depicts the sacrifice before the Temple of Jupiter. It’s a true showpiece, with auburn toning, and is a highlight of any collection. The same is true of a sestertius of Galba featuring a portrait that seems to sum up the entire character of the severe man. Did you even know that there were coins from Pertinax Junior? Well, you can buy one here. You can also find medallions from the Constantine Era, silver ones in the name of Constans I of four siliquas, and gold ones for Constantius II of two solidi.

Then it’s across Byzantium and over to the Islamic coins. In the last years, Numismatica has put special emphasis on this collection area. There are countless rarities here, such as a series of the first 56 Umayyad gold dinars, minted between 77 AH and 132 AH, up for auction as one lot. Since it would be impossible to mention all the wonderful pieces, here’s a fitting representative to give you an idea of what awaits: a mancuso from the 8th/9th century. These pieces, produced by Christian merchants according to an Abbasid prototype, were actually banned by the Catholic Church several centuries later.

The next attraction is a section from the Huntington Collection, the approximately three hundred siege coins that begin with the 1529 siege of Vienna and end with the 1713 siege of Landau. The richness and range of offerings is hard to believe, and with many rare pieces offered in the triple-digit ranges, even the collector of more modest means can get in on the action. It’s more than likely that a few won’t soar to absurd, exorbitant prices, so be sure to take a very careful look through everything on offer.

Collectors of coins from the Netherlands would be well advised to do the same – there are some fantastic pieces up for auction here that one rarely gets to see, with wonderful collector’s toning. The highest estimated piece in this section is an 8 souverains d’or from Flanders, minted under Charles II in 1694.

Specialist collectors of Besançon should take note – it’s unlikely you’ll find another comparable selection of coins from this city anytime soon. There are almost 50 lots coming up for auction, with estimates ranging from 200 – 10,000 francs. No self-respecting Besançon collector should miss it!

There are other coins from the Huntington Collection too, with offerings from the German States, the Habsburg Empire, Great Britain, Russia, Brazil and many more.

If you thought that was all there was to it, you’ll be amazed – since next up is the comprehensive section of coins and medals from around the world. From Albania through to the United States, there are rarities and specialities from practically every country. The German States offerings really stand out, with a number of large gold and silver coins.

Next up is a collection of coins from Annam/Vietnam. With their relatively affordable prices – estimates start at 100 francs – this Asian land might just prove to be the next big boom in Asian coins!

The Habsburg Empire section features quite a few early schauguldiners and large gold coins. There are also a small section of Chinese bullions, a section of early Chinese dollars, including the rare autodollar from 1928, and, of course, a selection of pieces from France and Great Britain. The Greek division really stands out with its extensive collection of trial strikes. And once we get to Italy, it’s really difficult to decide which of the rare, wonderfully maintained masterpieces to show you. Among numerous others, there’s an exceedingly rare florin d’or from Amadeo VII estimated at 100,000 francs; a 10 écus d’or of Charles Emmanuel under the guardianship of his mother, estimated at 150,000; a 5 lira from 1901 from Victor-Emmanuel III estimated at 75,000; a 1598 quadruplet from Pope Clement VIII estimated at 75,000. Again, this is just a small selection of the many pieces in the five-and six-figure range. It’s important to note that there are also high-quality pieces available here to appeal to the regular collector, with prices in the triple-digit range.

With Russia, however, things get expensive again. Numismatica Genevensis has a wide array of rarities on offer, like a chervonet of Peter II (50,000 CHF), 5 rubles of Elizabeth (50,000 CHF), a gold medal of Alexander I for the erection of the monument in honour of the Wars of Liberation in Berlin (40,000 CHF), 25 gold rubles of Alexander II (150,000 CHF) and many more.

Naturally, there’s also a lovely Swiss section with a number of rarities, including trial pieces for the first Swiss francs from the Paris Mint and a unique 10-ducats piece struck with the dies of a gluckhennentaler.

We’ll end this report by making special reference to the extensive collection of U.S. coins coming up for auction. From a 10-dollar piece from 1803 with a “liberty cap” all the way to a half-cent from 1797, there are plenty of rarities of all denominations, metals and price ranges just waiting for connoisseurs to uncover.

The final highlight is the American Numismatic Society’s sale of around 200 doublets of coins from all over the world from various collections, including, for example, a complete 1915 gold set from Cuba in PP. Prices begin at 100 francs for the doublets, making it a great opportunity both to buy yourself a piece with outstanding pedigree like, perhaps, one from the J. P. Morgan Collection, and support this immensely important numismatic institution.