The Museo del Tempo, exclusive licensees of the EXPO 2015 Milano official coin/medal souvenir programme have launched their newest collection of EXPO coins and medals which includes platinum, gold and silver pieces as well as the world’s first dual-material coin made of metal and wood. The collection, fresh from its recent display at Monte Carlo’s Musee des Timbres et Des Monnaies – where the official souvenirs were included in their latest exhibit entitled “EXPO to EXPO – from 1851 to 2015.” The exhibition featured many rare and highly collectable medals issued in honor of the Universal Expositions from the Great Exhibition at Crystal Palace in London to the more recent coins issued for the Shanghai EXPO in 2010. 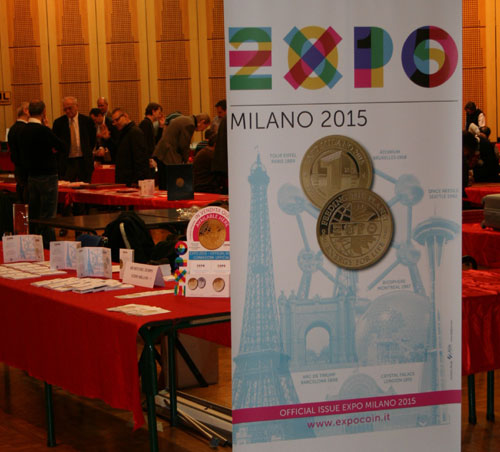 The collection was officially launched during Monte Carlo’s 22nd annual “Numismatique” Grand Bourse. As part of the launch, the first 50 visitors to the Grand Bourse were given the new single coin minted in Nordic gold and housed in a commemorative folder specially produced for the Monte Carlo show – it is this and the two-coin set which were the best selling product on the day for the EXPO 2015 table. 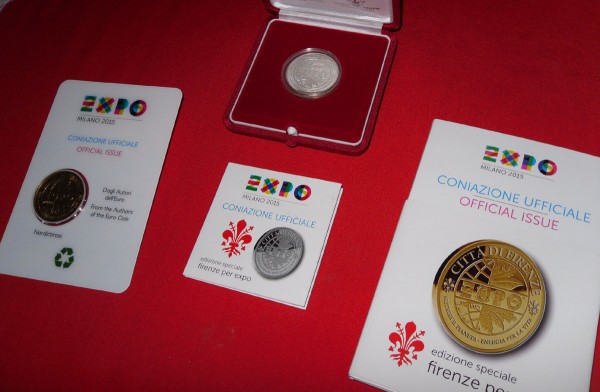 On the day, the organizers of the EXPO 2015 Milano official souvenir programme also introduced a new series of medals which will represent the major and historic cities in Italy, with the first medal in the series representing the beautiful city of Florence. The coin/medal includes the name “CITTA DI FIRENZE” and will be produced in a base metal of Nordic gold as well as in sterling silver. The new series is being produced in anticipation of the many Italians as well as ex-pats wishing to collect a coin/medal representing their own home city and also seeks to include not just Milan in the festivities but the whole of Italy in what is expected to be one of the biggest international expositions ever held in Europe. Additional cities scheduled to be included will be Genoa, Naples, Palermo, Rome, Venice to name but a few. In total it is expected that 21 major cities will be included in the series and that at least one million coins will be produced in both base metal and sterling silver. 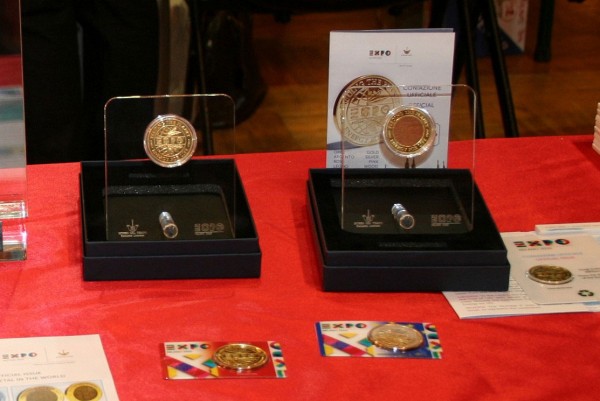 The exclusive product line of coins launched during the Grand Bourse include gold, platinum and silver coins ranging in sizes from ¼ ounce to one ounce minted to proof quality with very limited mintages. Of particular interest is the dual-material coin which is the first of its kind – the coin is produced in both silver and wood as well as in Nordic gold and wood. The use of wood was chosen as it symbolizes energy, long used throughout the ages as a source of warmth and energy. The two primary themes of the EXPO is “Feeding the Planet – Energy for life” and these coins contain a center core of hardwood which is embossed with the design of the official souvenir coin on both sides as if it were minted. The center is then inserted into the outer core making up the complete design specially commissioned for the worldwide event. 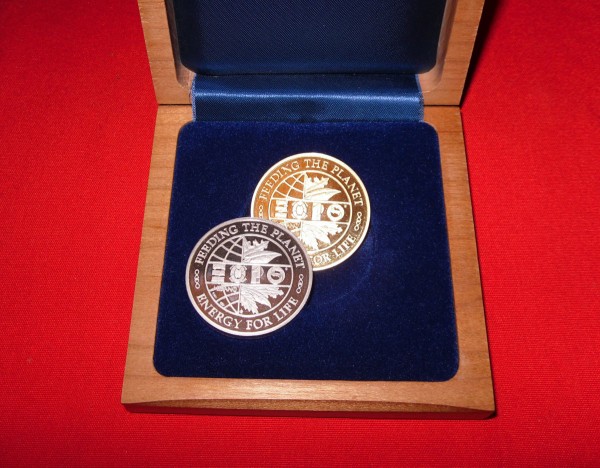 The EXPO 2015 Milano official medals and coin’s distinctive reverse images were designed by Luc Luycx, widely known as the artist behind the common reverse designs for the Euro coinage. Laura Cretara, former artistic chief of the Italian State Mint whose work includes many notable commemorative and circulation coins of the Italian Republic is the designer of the beautiful and inspiring obverse. Mrs. Cretara created the design for the world’s first bi-metallic coin, that of the 500 hundred Lira coin issued in 1982 and the obverse design for the current Italian 1 Euro coin. 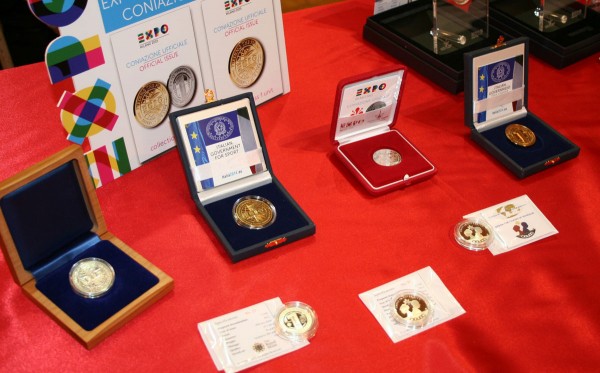 The EXPO 2015 Milano world spectacular opens on the 1st May in one of Italy’s most beautiful and historic cities. The Exhibition will close on the 31st October – it is expected that this EXPO will welcome more than twenty million visitors in the six month period. For further information and to view the complete catalogue of the coins and medals commissioned by the Museo Del Tempo – Roma, exclusive distributors of the official EXPO 2015 Milano souvenir coins & medals programme, please visit their website at: http://www.expocoin.it/ – Information offered in both Italian & English.