Milan, Italy. The organizers of the coins – medals for the Expo Milano 2015 event launched their upcoming coin programme on the 3rd May to an enthusiastic gathering of invited dignitaries, guests, government officials, and journalists in anticipation of the official start of the four-year coin project which highlights Milan’s world-wide festival in just 3 years’ time. 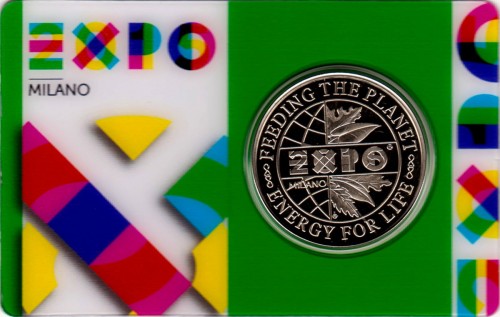 Set within the historic 18th century baroque-style building which now houses the Museum of Science & Technology and amid the splendor of the ornately decorated auditorium, the design for the first series of United Future World Currency coins were unveiled by founder / director of the UFWC, Dr. Sandro Sassoli. On hand during the presentation was the designer of the coin’s obverse, Mrs. Laura Cretara, former art director of the IPZS, (Italian State Mint). Mrs. Cretara commented that the new coins have the potential to give both Milan and Italy an opportunity to showcase the country for both their artistic and cultural achievements. Mrs. Cretara has re-designed the current UFWC insignia especially for this issue and incorporated the logo for EXPO 2015 cleverly in the design. The theme of EXPO 2015 is focused on the world’s need to produce sustainable food for an ever-increasing population and thus the text “FEEDING THE PLANET” and “ENERGY FOR LIFE” surrounds the primary design. 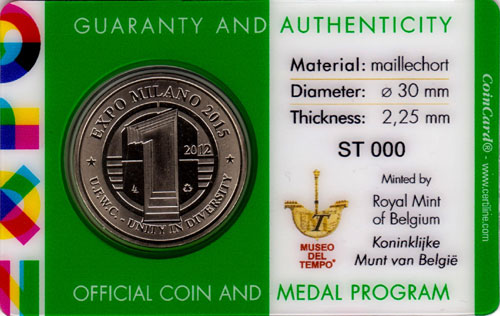 The “2012” dated coins are the first in the four-year series and struck in proof quality by the Royal Mint of Belgium are packaged in a tamper-proof secure credit-card sized pack produced in Maillechort (recycled nickel-based) metal. The obverse carries a variation of the insignia of the United Future World Currency specially prepared for this premier issue. Mrs. Cretara’s intricately engraved depiction for the EXPO 2015 obverse coins includes a design of with five leaves, each one originating from a tree particular to one of the five inhabited continents respectively.  In the center, the official EXPO 2015 Milan Expo logo is featured. The reverse of the coin is the work of Luc Luycx which includes the proposed denomination of “1” along with the internationally recognized symbol for recycling and the motto “UNITY IN DIVERSITY” under the numeral. 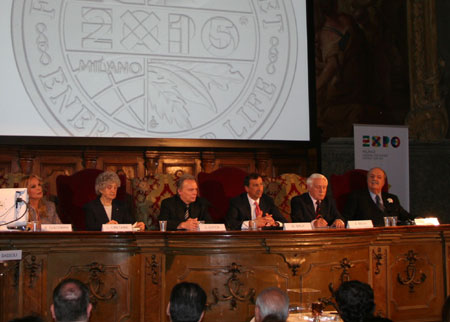 On hand to participate in the presentation was Mr. Lucyx, most noted as the graphic artist / engraver who designed the common reverse side for the EURO single currency coins. Mr. Lucyx added that he was extremely pleased to have participated in this important project. Former International Banknote Society President Giuseppe Crepanzano also took part in the launch and praised the programme for its long-term commitment to coin collectors and for the innovative and ambitious programme unveiled. Mr. Crepanzano also took the opportunity to speak about a potential banknote issue scheduled for the EXPO 2015 event which would be given legal tender status alongside the coins during the six-month long exhibition.

Lifetime President of the World Money Fair, Dr. Albert Beck took the opportunity to describe the programme as one of the most innovative and exciting coin projects to be launched in connection with any international event. Dr. Beck endorsed the efforts & activities of the United Future World Currency during his address for their insightful outlook to the concept of an internationally recognized and circulating world currency.

As part of the presentation, a display of coins in tribute to past world Expositions and to the concept of money & coins both ancient and up to the most recent coin issues entitled “From Hand to Hand, Global currencies from antiquity to EXPO 2015”. One particular coin on display was a very rare example produced in the 8th century BC and originating from Lydia, thought to be the birthplace of coinage. Struck in Electrum, a naturally occurring metal of gold and silver alloy, the coin includes a tiger’s head and Ram’s head on the obverse. Included in the exhibition were examples of Tetra-drachmas from the 5th century BC, a Roman Denari from the 1st century BC., a gold Soldius issued under the reign of Justinian I. Also included were gold “Fiorino’s”, Maria Theresa silver Thalers, American silver “Peace” Dollars and of course French 20 Franc gold coins representing the Latin Monetary Standard and concluding with examples of the EURO coins produced for Italy. 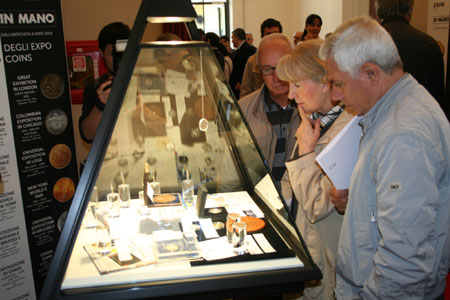 An additional display, including the coins and medals from past World Exhibitions which featured an original 1851 Bronze medal given out as a prize during the Great Exhibition in London organized by Prince Albert. A 1892 half dollar struck in the United States to mark the Columbian Exhibition held in Chicago and various Belgian, Japanese and Portuguese legal tender coins were included. Medals included those from the 1905 Exposition in Liege, the well-known 1939 World’s fair medal from the exhibition in New York and the EXPO’ 67 medals from the Canadian exhibition were featured. Specifically on show were the two medals that were given legal tender status for previous Milanese world expositions, those of the 1906 and 1928 events – and now the 2015 coins will follow this precedence.

The EXPO 2015 event begins on the 1st May within a new pavilion which is currently under construction. The venue will be built over 1.1 million square meters with space to accommodate more than 135 participating countries. It is expected that more than 20 million spectators will visit the international exhibition during the six-month tenure.

For more information about the coin series for EXPO 2015 Milano, please send any inquiries to: . The first coin issued in the secure-coin card will be available for purchase from the 1st June 2012. The presentation “From Hand to Hand, Global currencies from antiquity to EXPO 2015” will next be seen in Rome on the 28th May.

All images courtesy of Michael Alexander.