On Wednesday, March 29, the United States Mint announced that it will begin selling its 2017-dated American Liberty $100 gold coin on April 6.

The next day, Thursday, March 30, the Mint unveiled a beautiful new set of silver medals based on the designs of the gold coin. The medals were unveiled in a revolving turntable display in the Mint’s impressive exhibit at the Whitman Coin and Collectibles Expo, held in the Baltimore Convention Center. 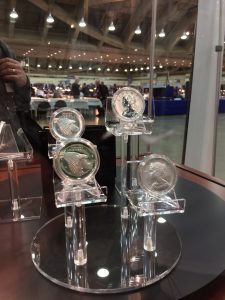 A sneak preview of the 2017 silver medals set (hover cursor to zoom).

Each of the .999 fine silver medals will be struck at a different mint facility—Philadelphia, Denver, San Francisco, or West Point—and each sports a distinctive finish: Uncirculated (“Burnished”), Proof, Reverse Proof, or Enhanced Uncirculated. This is similar to the set of silver Kennedy half dollars struck to mark the 50th anniversary of that coin in 2014.

Collectors will remember the excitement when the Mint’s first issue of American Liberty silver medals rolled out on August 23, 2016. Demand was so strong that the one-ounce, .999 fine medals sold out in six minutes. Mintage of those medals (all in Proof format) was capped at 12,500 from West Point and 12,500 from Philadelphia, with customers limited to ordering two of each per household, at $34.95 apiece.

I spoke with James Pressley, the Mint’s retail sales manager, at the Baltimore Expo. He told me that mintage and household ordering limits aren’t being publicized yet. Stay tuned for more details. 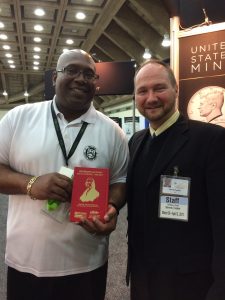 Design concepts for the 2017 High Relief American Liberty gold coin were reviewed and discussed by the Citizens Coinage Advisory Committee in March 2016. We studied more than 20 potential obverses and a dozen reverses. The committee’s recommendation to the secretary of the Treasury are the designs that were ultimately chosen for coinage. The obverse shows Miss Liberty as an African-American woman wearing a crown of stars.

At the CCAC’s March 15, 2016, meeting, committee chair Mary Lannin said, “We have an opportunity, all of us, to make a difference in applying a new perspective and to broaden the view of Lady Liberty which up to this point has been cast in a European classical mold. There are three things that we should keep in consideration: We should be inclusive of the fact that there are many races that make up the United States. We should be mindful that each of us has our own ideal of what a woman or Liberty should look like, and we may need to broaden that. And we should be sensitive when we make our choice that the characteristics are matching those ideals.”

In that meeting, committee member Steve Roach shared his thoughts on the obverse design: “For me, I think of ‘modern’ and I think of almost an absence of anything that could be considered fashion; I look at what is timeless, and for me that comes down to [obverse design number] 8. I’m absolutely in love with design number 8 for the obverse. To me it speaks to everything, from reading the discussions, that the 2015 coin [the first in the High Relief American Liberty series] aspired to be. To me this is different. It’s modern and it is definitely something that has not appeared on a coin before, and to me that’s really cool. And then I think about how it’s going to actually look being struck in high relief. Those cheekbones are everything, and I think it’s going to be an amazing looking coin.” Roach also contrasted the 2017 design proposals to the 2015 American Liberty High Relief gold coin: “When looking at these I kind of shy away from the full-length depictions because to me that looks so close to the 2015, especially if we don’t want to get into a series where it is standing Liberties. I think it’s good to make this one very different from the 2015 issue.”

“Show us 21st-century Liberty,” said CCAC member Donald Scarinci in support of the chosen design. “Show us Liberty in a new and contemporary way, and let’s shed these Civil War symbols, these hundred-year-old symbols that really don’t have the emotional impact to contemporary Americans that they did 100 years ago.” Scarinci praised the Mint for moving forward, beyond rehashing old classic coinage designs. “Weinman and Saint-Gaudens are dead; let’s get over it,” he said. “It’s as impossible for them to do contemporary designs as it is for contemporary artists to redo their designs without looking trite and imitative, so let’s not. We don’t need to. We need to find Liberty in a new and modern way for the 21st century.” 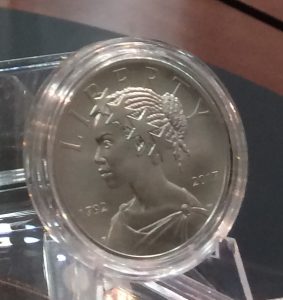 Committee member Jeanne Stevens-Sollman thanked the Mint’s artists for their work. “I want to talk about the obverse and I also want to compliment the Mint staff artists that presented this portfolio, because it is just really outstanding for the most part and I was very happy to see the diversification that you gave us.  It’s very wonderful.  Thank you.”

My own observations at the time were these: “As I looked at the obverses what I found myself focusing on is the symbolism of them and trying to decide which one best expresses the concept of Liberty. If you look at Number 12, without a kind of editorial-cartoon label on it, that could just as easily be Agriculture. If you look at Number 5, that could be Enlightenment, the lamp of knowledge and fire symbolizing knowledge. To me the ones that are most representative of the concept of Liberty are actually the ones that have the dove being released, into freedom. . . . Having said that, I also do like the concept of a head-and-shoulders portrait. I think [Number] 8 is very nice. It reminds me of the 1870 Standard Silver patterns, as well as the statue of Freedom on top of the Capitol. I like the crown of stars.”

“We’re doing something pretty exciting here,” said committee member Herman Viola, “and I think it’s about time we had some diversity in our coinage. Number 8 just really stands out. It’s dynamite. [Number] 21 has somewhat that same effect, but I sure like 8.”

Committee member Robert Hoge observed, “I have to say I think this is one of the most beautiful suites of images that I’ve seen in any presentation. I’m excited that we have so many new, wonderful images of Liberty, and I wouldn’t be disappointed with any of these. I do have to say I think Number 8 is my favorite, along with a lot of the rest of you. We’ve talked about whether or not these images are neoclassical or classicizing. Really there are only a few that are not. I think we probably need to accept that, because the whole idea of Liberty actually is a classical concept, so I wouldn’t worry about it.” 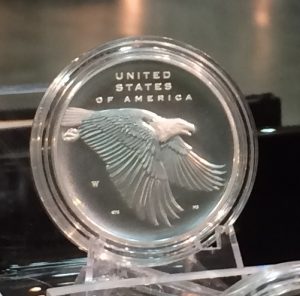 Committee member Heidi Wastweet, too, gave kudos to the Mint’s designers: “I think it bears repeating: compliments to the Mint on a beautiful group of drawings. There are a lot of good things to choose from here, so thank you for giving us that.”

The committee voted and the preferred obverse design, Number 8, received a strong 28 out of 33 possible votes. Reverse 1 was also strongly preferred, receiving 29 out of 33 possible votes. These were the designs recommended to the secretary of the Treasury and ultimately chosen by him for coinage (and, with the denomination and other coin-related inscriptions removed, for the silver medals).

Several months later, the idea of a set of silver medals related to the gold American Liberty coin was discussed at the Mint’s October 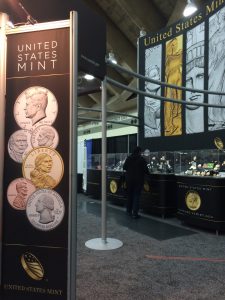 2016 Numismatic Forum held in Philadelphia. The gold coin and silver medals are being released as part of the 225th-anniversary celebration of American coinage, which started in Philadelphia with silver half dismes in 1792 and copper cents and half cents in 1793.

Visitors to the Whitman Coin and Collectibles Expo can see the silver medals in person. The show is going on this week, March 30 to April 2, at the Baltimore Convention Center. ❑