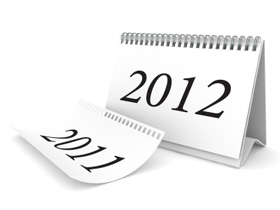 There are a myriad of calamities and catastrophes that could affect financial markets in the US or worldwide in 2012.  Pretty much all of them would spur more people to seek to purchase physical gold and silver.

Whether or not these come to pass, and when, and how great an impact they will have on precious metals markets all have some degree of uncertainty today.  So, before I get in my range of December 31, 2012 price forecasts, let me review my estimates of the likelihood of each of these events occurring at some point in 2012.

The US dollar will fall against gold and silver by 17% or more—I give at least a 95% probability of occurrence.  For the past twelve years, the US dollar has fallen every year against gold, by a compounded average of almost 17%.  The dollar has also fallen against silver in nine of the past 12 years, averaging a compounded decline over the entire period almost as much as the dollar fell against gold.  US economy and the finances of the US government look to be in the worst position at any time in the past 12 years, so I give this event as high a likelihood as any other event—virtually a “sure thing.”

The US dollar index will decline below 65—I forecast a 50% likelihood of occurrence.  The US Dollar Index ended 2011 just over 80.   If the Index were to sink much below 70 at any time in 2012, there is a very real possibility of the dollar falling more sharply.  The US monetary system could even collapse.   However, it is possible that the Index may not fall that far as almost all of the other currencies used in calculating the Index are also seeing their money supplies inflated by their issuing governments.  It is this “Mutually Assured Destruction” of multiple currencies that could keep the US Dollar Index from collapse.

One or more of the world’s largest banks classified as SIFI by the Financial Stability Board will fail—I project a 95% prospect of occurrence.  The Financial Stability Board operates under the auspices of the G-20 Group of Nations, effectively as part of a global government.  At the G20 meeting in Cannes, France November 3-4, 2011, the Board identified a number of Systematically Important Financial Institutions (SIFI), which are banks and brokerages that are so large that failure of any one of them would pose a serious risk of worldwide financial chaos and collapse.  One of them, Dexia Bank in Belgium, failed last year, with the governments of Belgium, France, and Luxembourg propping up the bank to avoid a domino effect of cascading bank failures.  With the losses sustained by US and European banks holding European sovereign debt positions, it is almost a “sure thing” that one or more will fail in 2012.  In the US, Bank of America is perhaps in the most precarious position.

The Eurozone nations and the US government will both become more dysfunctional at preventing financial crises—which I foresee a 95% probability of occurrence.  The latest fiasco where the US Congress, in theory an institution with the combined wisdom to pass timeless legislation, was only able to pass a two month extension of some expiring tax reductions, is sample of what will happen constantly in 2012 in the US and in Europe.  Businesses and individuals will not be able to make intermediate or long-term plans because they simply will not know what laws will be in effect even just a few months down the road.  As a result, job-creating businesses will be hesitant to expand and hire employees.  Just last week, one of my employees who was contemplating a family trip to Europe this summer picked my brain on the possibility that transportation, food distribution, and even what means of payment might be acceptable were all uncertainties.  Yes, it really is that bad.

A debt default, at least effectively, by one or more significant world governments leads to widespread financial chaos—I estimate at least an 85% likelihood of occurrence.  Technically, there is no reason that any independent nation should ever default on its own debt—if the debt is denominated in the national currency.  Governments could simply increase the money supply to repay debt with less valuable money.

However, most nations are constrained by not having enough economic clout to be able to issue debt in their own currency or they are a member of the Eurozone, where 17 nations are tied to a joint currency.  High on the list of nations that may officially default on at least some of their debt in 2012 are Greece, Italy, Portugal, Ireland, Hungary, Spain, and France.  It would not be a total joke to add the United States to this list as many state and local governments are teetering on the edge.  The high risk of default by one or more Eurozone nations will also likely doom the Euro as it is now configured, and may even result in the end of the Euro as a multinational currency.

Another bankruptcy of a brokerage such as happened to MF Global Holdings in 2011 with the result that many more investors see their “secured” assets stolen from them—I expect an 80% prospect of occurrence.  It is starting to look like the MF Global bankruptcy is going to end up with the counterparties holdings derivatives getting the lion’s share of assets and the customers of the company getting the shaft.  The prospect of this occurring at other brokerages is likely to spark investors to withdraw their accounts.  During 34 of the last 35 weeks in 2011, US mutual funds experienced net outflows of investor funds.  Any panic that leads to a “run” on a brokerage will likely drive the company to fail, causing a snowball effect of even more investors pulling their funds out of other brokerages.

By the way, the MF Global bankruptcy basically had as part of its fallout the failure of the COMEX to deliver on gold and silver contracts.  Expect a high risk of even more of this coming to pass in 2012.  Any failure in 2012 would carry the added risk that gold and silver exchange traded funds may not be able to fulfill their obligations to hold or deliver sufficient metals to cover their outstanding shares.

The enactment of Sections 1031-1033 of the National Defense Authorization Act signed into law December 31, 2011 encourages at least a 50% increase in the number of Americans purchasing physical gold and silver—I estimate a 60% probability of occurrence.  With the stroke of a pen, President Obama and Congress have conspired to pretty much repeal the 4th Amendment to the US Constitution.  It authorizes the US military to seize any person (including Americans) at any time anywhere in the world (including on US soil) and hold them without pressing charges, bringing them to trial, or even acknowledging their arrest.  All the US government has to do is allege that the person is possibly guilty of terrorism or conspiracy to support terrorism, under definitions that the US government dictates, against either the United States of any “coalition partners.”  When Americans realize that even the purchase of physical gold or silver might represent lack of faith in the US dollar and could be construed by the federal government as undermining its power, there is a significant chance that will actually spur some new buyers to quickly acquire precious metals “before it is too late.”  Such buyers would not necessarily be purchasing it to protect their financial well-being.  Rather, I think many of them would become buyers out of fear of what further depredations the US government might inflict on its citizenry.

The US government takes further steps toward seizing the assets of private retirement accounts—I expect a 75% chance of occurrence.  Face it, the US government is desperate to get its hands on any kind of financial resources.  What better pretext than by proclaiming that in order to protect the value of private retirement assets that the US government will take them and replace them with US Treasury debt that is guaranteed to be “safe?”  In one fell swoop, the government could gain trillions of dollars of assets in return for paper promises.  There is no other asset pool with anywhere near this amount of assets for the government to attempt to seize.  The seizure will continue to develop through a multi-step process, so the mandatory confiscation of private retirement assets will probably not happen until after 2012.  But I think it highly likely that more steps will be taken toward that eventual goal.

The disclosure of more evidence that the Federal Reserve and other major central banks do not have all the gold reserves that they are reporting as being in their vaults—I foresee a 75% probability of occurrence.  Every year, more documents come out and more public officials accidentally acknowledge that central banks have surreptitiously dumped their gold reserves on the market to suppress precious metals prices.  In years past, the International Monetary Fund required central banks to record as being in their vaults any gold that was out on lease or a swap, and also requiring the central bank that had actual possession to record this same gold as part of its reserves.  The IMF now permits central banks to stop double reporting of gold reserves, but there is almost certainly much more gold reported as being in vaults that just isn’t there.

This list is by no means complete, but I am confident you get my point.

As one or more of these events occur, that will inevitably increase the prospect of other events coming to pass.  If a national government defaults on its debt, that will put more financial pressure on the other governments, central banks, and private banks that hold this debt.

The risks of some catastrophes hitting early in the year leaves me confident with my recent predictions that the price of gold will reach $2,000 and silver $60 by the end of May 2012 at the latest.

As for the end of 2012, prices have a much wider range of possible outcomes.  So, here I go with my estimated probability that the gold and silver prices will end within these various ranges:

As you can see, taking into account the global financial perils that exist, I expect gold and silver to shine in 2012.