Last week, the French satirical publication “Charlie Hebdo” was savagely attacked by two Islamic fundamentalist terrorists who burst into their offices in the heart of Paris, France in the mid-morning hours and deliberately shot dead 10 of their journalists and contributors, including its long-time editor.

The police have determined that these two gunmen may have had help, they may have had “inside” information as to when and where the contributors were having their weekly editorial meeting and they indeed had intended to get away with this attack had it perhaps not been for the “bonehead-like” stroke of good luck that one of the gunmen left behind his national ID card in the stolen car they had fled in. 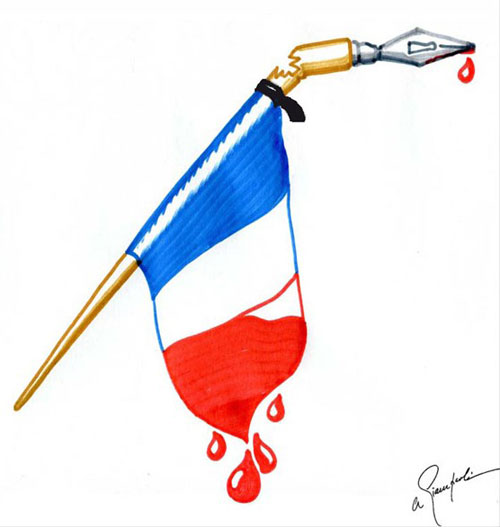 For those of us who remember the name of this publication from a few years ago, the satirical magazine published cartoon images of the prophet of the Muslim religion – something which for Muslims, is ostensibly not allowed by tradition, edict or custom. But, with this in mind, remember – these nine men and one woman died for a drawing – a cartoon and this isn’t something which is supposed to happen in a society which upholds the ability to express one’s self with the threat of death – also as tradition or custom.

This particular publication has had a long tradition itself of poking fun at the “absurd” in our daily lives, mostly in caricature, caption, cartoon or editorial. For the French, as in America and most of the free world, there is a long tradition of focusing on political, entertainment, religious or popular culture figures – no matter how “sacred” and Charlie Hedbo did what it did best, though admittedly it wasn’t everyone’s “cup of tea”.

The Editor of the weekly magazine Stephane Charbonnier had been previously the target for either harm or death and had commented on this possibility in 2011 when they had published the so-called offending cartoons. He didn’t always publish what was trendy or even the current tide of opinion but he was by all accounts, a staunch supporter of the right to the freedom of expression and speech.

Charlie Hebdo was merely the platform which was deliberately attacked by a vicious element of our society, now it seems a permanent element is in our midst which has shown that it can indeed be brutal, it can be ruthless, exact and most of all, it can be and is indeed armed to the teeth – just like an enemy army.

It would have been the very same outcome had a prominent person, journalist or not, who had the eye & ear of the public and had distributed what this element deemed to be offensive or insulting to these bizarre interpreters of their faith of anything they deem disrespectful that they add to their list, and this list is ever-growing.

What was ironic about this situation in 2011 was – had the offices of Charlie Hebdo not been fire-bombed as it had in retaliation over the publication of these cartoon images, it is really doubtful that anyone outside of a fringe-readership would have ever heard of Charlie Hebdo. Today, there is hardly anyone world-wide who has watched the news unfold or read about the incident who doesn’t now know of Charlie Hebdo, wholly the opposite of the intentions of these terrorists – so, perhaps something greater will emerge from this tragedy.

The fall-out of these events will be many-fold, from greater restriction of movement by bona-fide EU citizens to even greater security measures in all of our daily lives, not to mention that many more publications will be so much more reluctant to publish images of the prophet and comply out of fear or threat. It’s just what these terrorists want, for us to lessen our freedom of expression and speech, it isn’t through dialogue and compromise, it’s with the promise of a bomb explosion and at the end of the barrel of a gun.

I mention the reluctance felt by many editors in this article as I myself was discouraged by an editor of a publication I had written for from further submitting an article questioning the leniency of images of male Muslim figures depicted on currency who, could very easily be mistaken for their Prophet. I had included a string of images from several banknotes then in everyday use and from several countries which included these kinds of images and posed the question “Any of these images could be of Mohammed – is this a case of mistaken identity?”

I had tried to be respectful, I was mindful of cultural and religious sensitivities but I myself was curious about the inconsistencies and I was also aware that my article was for a predominantly non-muslim readership with a limited international circulation. However, since I had written the article just days after the fire-bomb on the offices of Charlie Hebdo, there seemed to be no takers – no interest in the subject matter whatsoever and an outright rejection and comment “no, not now” – perhaps it was just a matter of bad-timing or a real concern by the editor of “we could be next…you never know”.

As the situation in some ways had gotten worse, in some ways calmed down, I omitted submitting the article again anywhere – grudgingly accepting the fact that my question and supposition that any of the male images included on the various banknotes mentioned in my article who could very well be mistaken for the Prophet by any innocent individual who may not know the difference – as I had highlighted, and the practise of not depicting a human image, a religious persona, a believer on items which could be categorised as articles of art seemed to be inconsistent.

In a very small way, I had been silenced – since I did not have a publication of my own, printed or electronic and was not planning to organise one – the silencing felt repugnant and unfair, then as it does now. And, what’s changed in the four years since I wrote my “explosive” article which took a look at Middle East and Asian banknotes with the questionable depictions? Well, not too much on the money front – some of the notes were replaced, some went out of circulation because they had lost value and some are still in use. On the freedom of speech front – Well, that’s much more complicated and as I mentioned earlier, the fall-out is only beginning to be calculated but as far as I can see, we are much the poorer since we lost ten talented and creative Europeans who only wanted to poke fun at life’s absurdities without hurting anyone – and have unbelievably paid the ultimate price for it.

Put that way, my article was only rejected, four years ago it was just another low-profile casualty of the fear which was then and now ever-present in the minds of many publishers though I survived the rejection. But, the damage now seems to be far-reaching and in ways I cannot calculate myself, nor can I imagine what kind of immeasurable pain and sense of loss the families and friends of all of these people are going through, I hope that I – nor my own family ever experience that level of insurmountable grief.

Whether you are involved in the pursuit of putting down your thoughts on paper in word or image for a living, it seems we all have lost quite alot on that day last week. Extremists and terrorists have once again proven they have no sense of humanity and demonstrated their inability to live in a society which teaches and promotes varying degrees of tolerance and acceptance. We have also lost some sense of security and safety we tried to muster up in order to get on with our daily lives, especially if we’re in a big metropolitan city, in a sense, we’re wounded.

The news that Charlie Hebdo will again be published on schedule and that a run of more than three million copies, substantially greater than their usual 30,000 to 60,000 or so copies and that this will be paid for by a fund organised by the French and international media set up to meet the costs of the magazine has for many been received with great hope and for some, a lump in our throats. I know that those who purchase a copy will have in their thoughts the ten contributors, three policemen and four hostages in the kosher supermarket who were also involved in a shooting and hostage-taking incident to divert attention from the absconded gunmen, whether they read the magazine from cover to cover or not.

I didn’t know any of the fallen from Charlie Hebdo but I salute their determination to get their publication out there onto the streets and wholly support their efforts which could not have been easy on any level. If you are in France, and have a chance to pick up tomorrow’s issue, do so and as I said, even if you don’t read it, just keep it as a reminder that our freedoms of speech and expression are indeed under fire and all too fragile but all too valuable to concede or capitulate to those who would presume to dictate to a wider and even more powerful majority. In this instance, the pen, our instinct for survival and defence of our values proved to indeed be mightier than the sword or in the case of last week’s devastating incident, a Kalashnikov rifle. That in itself shows a real reinvigoration of the human spirit in the face of adversity, and you have to admire the surviving staff of this once previously little-known magazine for this – and I wholeheartedly do!

My appreciation and thanks go to the artist Alain Giampaoli for his poignant illustration symbolising the events of last week and for its use in this article.