Amid the historical and fascinating surroundings of Frankfurt’s Archaeological Museum, officials from the European Central Bank unveiled their new €5 banknote to an international audience of dignitaries and the world’s media. This is the European Central Bank’s second series of banknotes authorized for issue to the Euro-zone’s more than 330 million users and the occasion was an opportunity for the ECB to reiterate their commitment to the world of both the stability & longevity of the Euro in general as well as the safety and overall security of the continent’s premier currency notes. 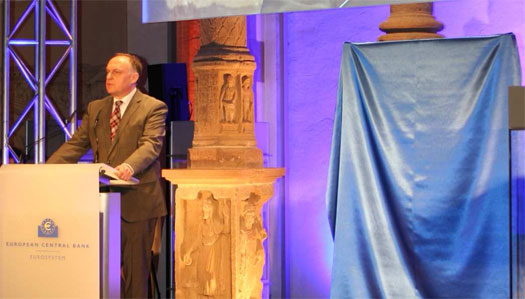 The event was opened by Professor Dr. Egon Wamers who spoke of the continent’s first single currency, referencing and comparing the Roman Empire’s denarii to the Euro single currency of today and commenting on the first example’s longevity. With his comments concluded, Dr. Wamers introduced the current and third president of the European Central Bank, Mario Draghi who was greeted with warm applause upon taking his place on stage. Mr. Draghi began with expressing his gratitude to both the curator of the Louvre Museum who, have kindly given permission for the image of Europa to be used from one of their artifacts housed there – as well as the designer Mr. Gerstetter who were present for the event’s proceedings. 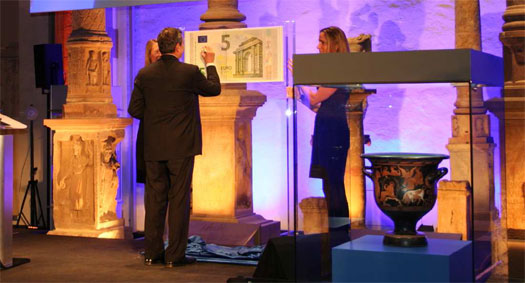 As part of the launch, Mr. Draghi adds his signature to the facsimile new €5 banknote while invited guests and media watch. The note will remain at the Archaeological Museum until March as part of the current exhibition “The new face of the Euro.”

Mr. Draghi further commented about the Euro’s continuing visible symbol of European integration and how the Euro itself was conceived as a key step towards this goal. As the continuing economic difficulties plaguing the Euro-zone were on the minds of much of the world’s media, Mr. Draghi also touched on the recent economic troubles within the Euro-zone by adding, “Despite the challenges facing the Euro area, progress was made in 2012 and I am confident that 2013 will bring a deepening of Economic and Monetary Union and will strengthen European integration.” With his comments concluded, Mr. Draghi turned to the backdrop behind him and with the unveiling of the new design, proceeded to add his signature to the facsimile banknote to a multitude of photos and approving applause from the audience. 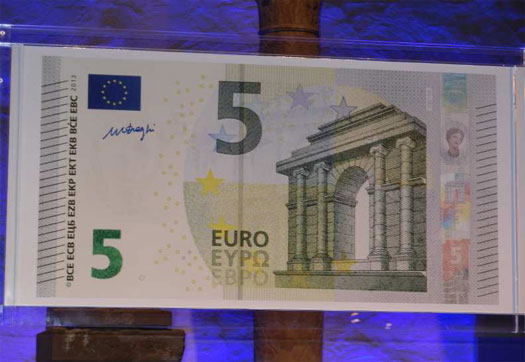 The newly re-designed €5, while many of the original design elements are retained, the overall change is that of the watermark and hologram which includes a depiction of the mythical figure of Europa, whom the continent derives its name from.

The design of the new note which includes a depiction of Europa, was found on an ancient vase housed in the Louvre Museum in Paris and it was this exceptional image which the new design is based on. The Vase, which was in fact an Urn used for mixing wine and water, was created over two thousand years ago. The two figures of Europa and the white bull – certainly that of Zeus in this form are at the center of the Vase’s design. The depiction of this young woman, in pleated dress and jewels with the white bull bowing at her feet is what the currency development & management team at the ECB decided to depict in the watermark & hologram on the first re-design in more than 11 years of the new notes – with six more to follow. 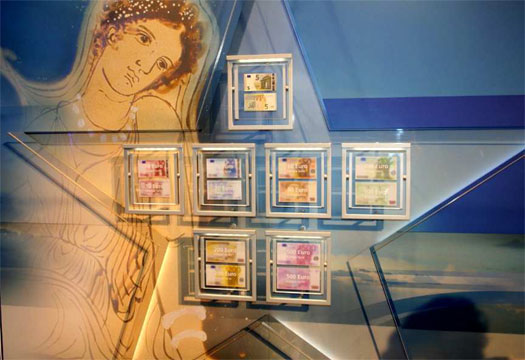 The charming image of Europa gazes down at the new and future notes which will become part of the “Europa” series, it is expected that the next note to undergo re-design in 2014 will be the €10 with the other 5 denominations to follow each year thereafter.

In his earlier comments about the change of design, Mr. Draghi, mentioned that research conducted by ECB banknote experts confirmed that people tend to remember and, are partial to faces – and in this regard, a face was chosen for inclusion in certain elements of the note for the new series. As with the previous series, the notes will be printed by various security note printing facilities within and out of the Euro-zone currency printing companies on behalf of their respective Central Banks.

The new €5 banknote which will be circulated by all 17 member states within the Euro-zone is scheduled to make its debut on the 2nd May 2013 – at last count it was estimated that there are more than 1,507,500,000 €5 notes in circulation. The European Central Bank has reiterated that although the two series will circulate together for an unspecified period of time, the first series €5 note will eventually be removed from circulation in due course but will always retain their value and can be exchanged at any Euro-system Central Bank.

All images above – courtesy of Michael Alexander 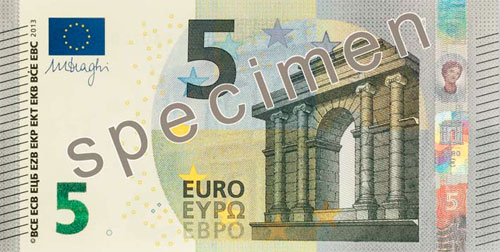 Obverse: Resplendent with an image of a seated Europa which is now part of the hologram, the famous and alluring female figure in Greek Mythology who legend has it, is abducted by Zeus, the Father of Gods and men and by taking the form of a white bull – and spiriting her to the Island of Crete where she eventually becomes Queen. The note continues to bear the design elements of the present series of buildings & bridges but now displays an alternative image of the arch currently depicted and added color elements. A “5” numeral seen towards the right on the first series has now been re-positioned to the left-center of the note and the lower “5” numeral is now printed with a color-shifting application. A more notable addition to the “Europa Series” of notes is the cyrillic text “EBPO” in preparation for Bulgaria to join the single currency in due course.  Included in the design change is a new watermark and hologram – an image of Europa which alternates with images of arches and numerals. As an added security feature, a “5” numeral in a color-shifting application has been added to the lower left of the note on the obverse. The year “2013” appears just above the signature of the ECB’s president. Independent banknote designer Reinhold Gerstetter, based in Berlin was selected to refresh the design of the second series. The note retains elements of the now familiar grey color with additional color enhancement and also its dimensions of 120 / 62 mm or 4.7 in × 2.4 in. 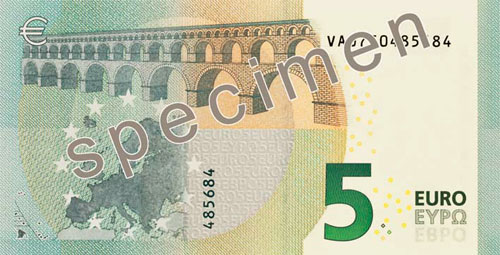 Reverse: The Roman era aqueduct arches depicted in the first series continues as the primary design but has also been revised and given greater depth in color and contrast. A new version of the map of Europe which has been slightly reduced in dimensions is now brought to the left half of the note in order to make room for a larger “5” numeral which is positioned to the lower right half. A portion of the note’s serial number is now displayed in a vertical direction and positioned to the right side of the European map.