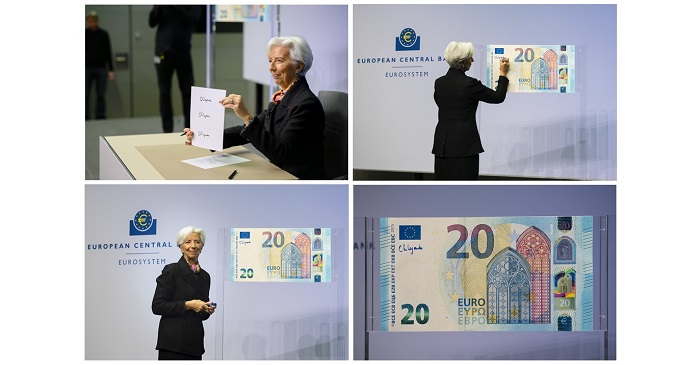 The new president of the European Central Bank took part in a ceremony (27th November) in which she added her signature to a ceremonial display banknote, further solidifying her tenure as the head of the European Central Bank. Christine Lagarde, former head of the International Monetary Fund and a French national, was nominated in July 2019 and confirmed in September as the Central Bank’s new president for an eight-year non-renewable term. Her term began on the 1st November, and, as such, she is the institution’s fourth president whose signature will be added to euro banknotes since their introduction.

During the brief ceremony at the ECB’s headquarters in Frankfurt, Germany, Lagarde expressed her sentiments on the importance of the occasion by reiterating the need to secure the trust in money so that people can focus on what matters to them. She further commented on the ECB’s mandate and their main objectives which reflect the well-known “functions of money.” Lagarde focused on euro banknotes themselves as ”the most tangible symbol of European integration.”

Since their introduction in January 2002, the number of euro banknotes in circulation has risen steadily, reflecting both the importance of cash in the economies of the 19 euro-zone members as well as the euro’s international appeal. There are now 23 billion euro banknotes in circulation with a total value of €1.26 trillion — a third of which are being used outside the euro area. The euro-zone, officially called the euro area, is a monetary union of 19 of the 28 European Union member states which have adopted the euro as their common currency and sole legal tender.

Beginning in 2013, a second series of “Europa” banknotes was introduced denomination by denomination, starting with the €5 value. The series was concluded in 2019 with the simultaneous introduction of the €100 and €200 banknotes, completing the series. All of the Europa series euro banknotes include the signatures of the former ECB President Mario Draghi. As Lagarde’s name is added, the series will show a second signature.

Lagarde added her signature to a €20 display Europa series banknote, the design of which is dedicated to Europe’s Gothic era of architecture and was introduced in November 2015. It is expected that the public will see her signatures on their banknotes in the latter half of 2020. For additional information about euro banknotes and coins, please visit the website of the European Central Bank.

Ceremonial signature images are courtesy of the Press Office of the European Central Bank.