As the Republic of Estonia prepares for the adoption of the Euro on the 1st January 2011, the Mint of Finland has announced that coin production for the Estonian version of the single currency has begun. 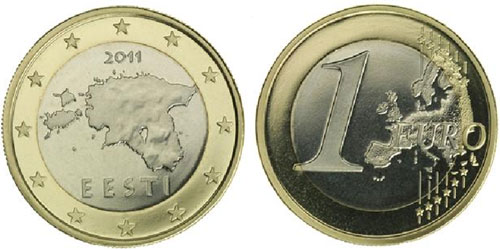 The appearance of the coins was decided by a public vote within Estonia. The winning design by Lembit Löhmus was chosen from hundreds of entries submitted. All the Euro coins feature the same theme incorporating an image of the map of Estonia with the word EESTI (Estonia) beneath. Also on the national side of Estonian euro coins is the year of minting in addition to the 12 stars of the European Union.

Estonia re-introduced their national currency the Kroon in 1992 after the re-establishment of Independence from the Soviet Union in 1991. Banknotes introduced were the 1, 2, 5, 10, 25, 100 and 500 Krooni, with a 50 Krooni banknote introduced in 1994. Coins of 5, 10, 20 and 50 senti along with 1 and 5 krooni coins were introduced in stages between 1992 and 2001. The kroon was established with a permanent pegged rate of 8 Krooni equaling one Deutsche Mark. When the German mark was pegged to the EURO in 1999, Estonia gained an automatic exchange rate of 15.64 Krooni.