The Bank of Estonia have launched a new commemorative coin which highlights the XXII Winter Olympic Games and the Estonian delegation who will be representing the country next month.

The coin is the second to feature the winter games, the first one being for the 2010 Games in Vancouver Canada when the Estonian team sent a total of 30 athletes. It was at these games in which Kristina Šmigun-Vähi took part in the Cross-country skiing competition and brought home the silver medal in the Women’s 10 kilometer freestyle event. This year, the Estonian team will comprise a total of 21 athletes and will compete in six sporting events. 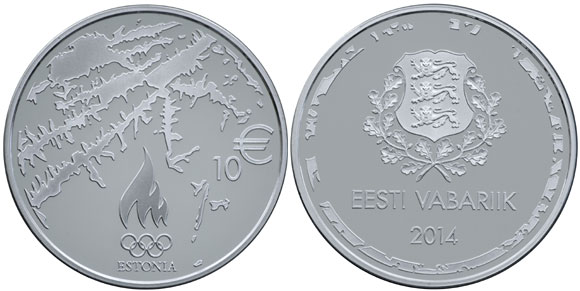 The 2014 Winter Olympics Coin is designed by artist Taavet Kohal and struck by the Royal Dutch Mint in Utrecht for the Bank of Estonia. It features a stylized design of crystals and ice which is inspired by the delicate patterns that form on frosted glass. Also shown is the official Estonian Olympic logo along with the face value of ten Euro.

The reverse of the coin includes elements of the primary motif seen on the obverse around the edge along with the country’s coat of arms and the text “EESTI VABARIIK” (Republic of Estonia) and the year of issue of 2014.

The Sochi Winter Olympic Games opening ceremonies begin on the 6th February and conclude on the 23rd. For more information on this and other coins issued by the Bank of Estonia, please visit the website of Estonian Post at: http://www.post.ee/10221?id=10221&product_id=8606&c_tpl=1051 Information is offered in English, Estonian and Russian, international orders dispatched.

The Bank of Estonia Museum’s website can be viewed at: http://muuseum.eestipank.ee/en/epm-products Information offered in English and Estonian – the Museum’s retail shop is open from Tuesdays to Fridays 12.00-17.00 and on Saturdays 11.00-16.00.