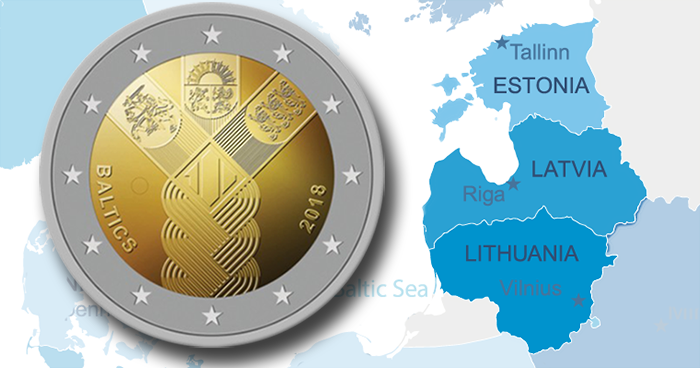 As part of the upcoming centenary anniversary being observed by the three Baltic Republics, each of their central banks will issue a commemorative €2 coin with a single design relevant to all three countries. The new coin was unveiled on the 11th April, with the winning design from a competition open to anyone interested in casting a vote. Six designs, two from each Baltic Republic were short-listed, and the vote commenced from the 7th April.

This is the first €2 commemorative coin of the Baltic States with a shared design. Moreover, it has been created through the involvement of artists and the public of the three countries. A total of 14,302 people from all over the world participated in the vote, but the vast majority of votes—93%—came from the Baltic States. In total, 4,277 votes were cast for one of the designs submitted by Lithuanian artist Justas Petrulis, whose depiction of three strands braided together symbolises the common past, present, and future of the three Baltic States intertwined in a singlet plait. This coin design also represents his debut in coin art. The coins will have an identical national side design selected via the public vote, while the name of the issuing country will represent the only difference. As is the case with all other €2 commemorative coins, the coins of this issue will have a legal-tender status across the euro-zone. The coin will be issued in early 2018, when the year-long centenary celebrations will begin. It is expected that all three Central Banks will issue the coin as a three-coin set.

For more information on the project and images of the five additional entries, please visit the website of Baltic 100.   ❑
Share: