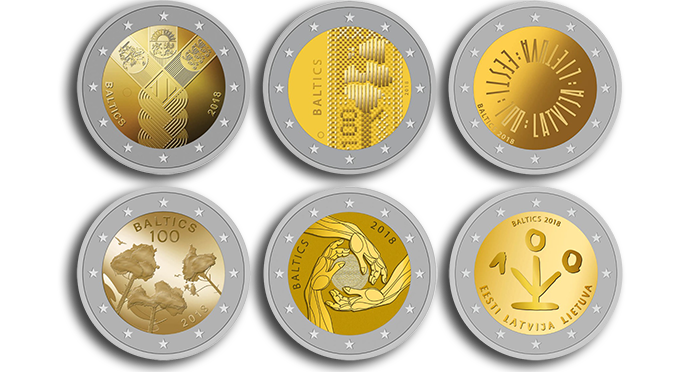 The Bank of Estonia, the Bank of Latvia, and the Bank of Lithuania have announced that all three Baltic countries will be participating in a joint issue to celebrate their centennial anniversaries of statehood and independence, which will be taking place in 2018. Six designs have been short-listed by the public in all three countries, and the three banks have announced that interested members of the wider public will have a say as to which coin is jointly issued next year. The celebratory programme will include the new €2 coins from each state (all of which are members of the eurozone) and other collector coins, yet to be announced. This joint issue will see a common obverse commemorative design for all three countries, with the name of each issuing country included in the design.

This is the first €2 commemorative coin whose design has been chosen jointly by the population of the three Baltic states. As is the case with other €2 commemoratives issued within the eurozone, they are legal tender throughout the 19 member states adhering to the single currency.

The three central banks invite everyone who is interested to vote by 5th April 2017. The six different design candidates (two from each country) can be viewed and voted for on the website www.balticcoin.eu. The banks also invite the public to participate in a coin draw in which 100 winners will be chosen. Each winner will receive all three coins—one from Estonia, Latvia, and Lithuania—in Brilliant Uncirculated (BU) quality in a special souvenir presentation, taken from their allotted official mintage. The names of the winners will be published on the website www.baltijasmoneta.eu sometime after the closing date of voting. (The terms and conditions of the coin draw are available on the same website.) The winners will receive their prizes in early 2018, when the coins are issued.

Background of the Baltic States

The Republics of Estonia, Latvia, and Lithuania all achieved their independence after the crisis in Russia resulting from the unexpected abdication of Czar Nicholas II on the 15th March 1917. These states were effectively part of the Russian Empire, but movements supporting independence from Russia had existed in each state for many years beforehand. With the fall of the transitional republican government of Alexander Kerensky in October 1917 and the rise of the Bolsheviks during the Great October Socialist Revolution, the desire to form independent governments became more acute.

Estonia moved to declare their autonomy through their provisional parliament as early as the 12th April 1917. A formal declaration of independence was announced on the 24th February 1918 and is today celebrated as the country’s official national holiday. Their declaration was finally recognised by the Bolsheviks on the 2nd February 1920.

Latvia followed suit and declared their formal independence from the successors of Imperial Russia on the 18th November 1918. Their new status was recognised by the Soviet government on the 26th January 1921.


Lithuania’s history was slightly different. An independent kingdom since 1253 with the coronation of Mindaugas (1203–1263), and later a grand duchy, Lithuania was also at the forefront of a greater commonwealth, which included Poland, from 1569. Much of the territory of Lithuania became part of the Russian Empire after successive wars between 1772 and 1795. After the fall of the Russian provisional government in 1917, Lithuania’s own provisional parliament announced their independence on the 16th February 1918, essentially proclaiming the restoration of their independent state. Matters were complicated for Lithuania since they were occupied by Imperial German troops who were fighting the Russians during the Great War. A short-lived Kingdom of Lithuania was declared at the insistence of Berlin, and the Lithuanian government named Prince Wilhelm, Duke of Urach (1864–1928), as the new king in June of the same year. With the turn of events in Germany and their impending loss to the Allies of Great Britain, France, and the United States, the invitation to Prince Wilhelm was withdrawn in November, and a Republic was formed shortly thereafter. The new Soviet state recognised Lithuanian statehood on the 12th July 1920.

For all three of the Baltic states, independence would be short lived, lasting only two decades before occupation by both the Third Reich in 1940 and reoccupation by the Soviet Union during the Second World War. The countries of Estonia, Latvia, and Lithuania were all forcibly incorporated into the Soviet Union as the 13th, 14th, and 15th republics in the USSR in 1944. This forced incorporation was never internationally recognised, especially by the United States, the United Nations, and much of Europe. It would be nearly another fifty years until the re-establishment of independence for all three Baltic states would be achieved—and only after the fall of the Soviet Union, which occurred in 1991.   ❑
Share: