The Bank of Estonia has announced the issue of a new collector coin which is dedicated to the Estonian author Eduard Vilde (1865 – 1933) on the 150th anniversary of his birth. Vilde was one of the most revered figures in Estonian literature and is generally credited as being the country’s first professional writer. As well as Vilde being considered a pioneer of critical realism in Estonian literature he is also remembered as a diplomat having served as Estonian ambassador in Berlin for several years after Estonia’s independence.

Vilde grew up on the farm in Pudivere, Viru County in what was the Governorate of Estonia, then part of the Russian Empire where his father worked. Vilde began working as a journalist in 1883 and spent a great deal of his life traveling abroad. He lived for some time in Berlin in the 1890s, and was influenced by materialism and socialism. At the same time, Vilde’s writings were also guided by the realism and naturalism of the French writer Émile Zola (1840–1902). In addition to being a prolific writer, Vilde was also an outspoken critic of Tsarist rule in Estonia and of the German landowners who owned extensive estates and who exported substantial amounts of wealth out of the country. Vilde spent the last years of his life editing and revising an enormous volume of his collected works. He died on the 26th December 1933 and is buried in the capital, Tallinn. 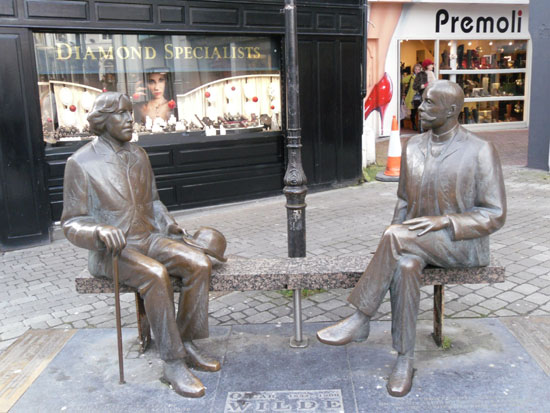 A statue in the Irish City of Galway is placed in the city square in Vilde’s honour, he is seated next to Oscar Wilde, a contemporary of Vilde’s and two prominent authors who lived in different parts of Europe and shared the same surname.

The coin, designed by map maker and graphic artist Mait Luidalepp is produced by the Mint of Romania on behalf of the Bank of Estonia. The obverse design uses titles from his works such as The Inscrutable Mystery, The Peasant War at Mahtra and The Man in the Black Cloak to form a crossword puzzle type of motif. The design also includes the denomination of €10 alongside the titles.

The reverse bears the coat of arms of the Republic of Estonia along with the year of issue below the crest.

The collector coin can be purchased from Eesti Post post office counters across Estonia and on the Eesti Post online shop as well as the Eesti Pank museum located next to the Main offices of the Bank of Estonia in the centre of Tallinn. A commemorative stamp with a nominal value of 55 cents was also issued on the 4th March along with the collector coin. A first day cover will be issued with the stamp and a first day cancellation will be affixed. The stamp is designed by the well-known stamp designer Vladimir Taiger.

For more information, please visit the website of the Bank of Estonia Museum at: http://muuseum.eestipank.ee/en/epm-products Information offered in English and Estonian.