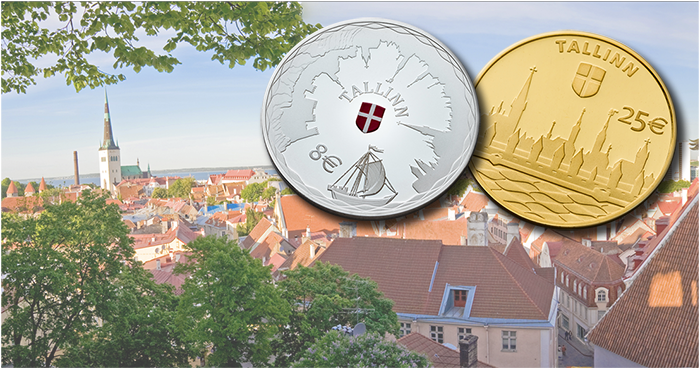 The Bank of Estonia announced (20th January) the upcoming issue and sale of a new set of coins that initiates a new series highlighting the Baltic country’s connection to Hanseatic culture and history. The collector coins for “Hanseatic Tallinn” is the first in the series. The era of the Hanseatic League was especially important to Estonian history in many ways, as the larger towns connected the country and people closely to Europe, and many of Estonia’s most beautiful old towns date back to that time.

The coins are produced by Portugal’s Imprensa Nacional Casa da Moeda, S.A., on behalf of the Bank of Estonia. Both coins—one gold, one silver—are designed by Estonian artist Riho Luuse. The obverse of the silver coin depicts the skyline of the old town of Tallinn, which curves around the border of the field with the roofs pointing toward the center. Many of the city’s well-known landmarks are easily recognisable, such as the steeple of the Niguliste Church (the tallest structure in the city), the many surviving towers surrounding Old Town, and Toompea, the primary medieval-era tower adjacent to the country’s parliament, which always flies the national flag. Surrounding the skyline is a narrow border of stylised waves, and a Hanseatic-era trading ship is positioned on the waves between the ends of the skyline at the bottom of the coin. The heraldic shield of Tallinn, with red colour applied, is placed in the centre of the primary design. The coin’s denomination, 8 €, is seen just to the left of the ship.

The reverse features the national crest of Estonia along with the text EESTI VABARIIK (Estonian Republic) above and the year of issue, 2017, below. The stylised wave border from the obverse is repeated on the reverse.

The gold coin also shows the historical skyline of Tallinn, but in a traditional, horizontal arrangement. The steeples and spires are easily recognisable, including the historic weathervane atop the Town Hall, “Vana Toomas” (Old Thomas, who is the mascot of Old Town). Below the skyline are stylised waves in the form of fish; above it is the heraldic shield of Tallinn.

The gold obverse shows the coat of arms of the Republic of Estonia, with EESTI VABARIIK   above and the year of issue, 2017, to the upper right of the arms. The stylised waves from the obverse are repeated at the bottom.

The collector coins are on sale as of the 9th February and are available from branches of the Bank of Estonia as well as from their online retail service at http://epood.eestipank.ee/en. Estonian Post also retail the collector coins of Estonia for domestic purchases at main locations in larger cities. The gold and silver coins are available as separate items or as a combined set.

Estonia’s historical past, which included many years within the Hanseatic League, saw the country (or territory, as it was contained within larger empires or kingdoms) expand its economic importance and cultural awareness. The Hanseatic League, a powerful group of trading cities influenced by Germanic culture and economic activity, experienced the height of its influence and power from the middle 1200’s to the end of the late 1400’s (though the League remained intact until the middle 1600’s). The League consisted of just over 200 cities and towns in a loosely grouped string. Member-cities benefitted greatly from the organised trading that spanned from the heart of the Holy Roman Empire right up to what was referred to as the town of Reval (now Tallinn) and many towns in between. Merchants in Estonia and Livonia (present-day Latvia) benefitted greatly from this trade, especially as Reval was a well-known port city right on the shores of the Baltic Sea, sandwiched in between St. Petersburg and Helsinki. Other towns within the Estonian borders that were part of the Hanseatic League included Pernau (present-day Pärnu), Narva, and Dorpat (present-day Tartu).

The network of sea and land routes greatly extended the effectiveness of the Hanseatic trading system, with many of the routes leading right to the borders of Prussia, one of the strongest states in the Holy Roman Empire. The networks concentrated on specific markets. From London, where quality finished products were sold; to towns in Scandinavia, where much of their raw materials were moved; to towns of industry, where fine linens and wine were sold; to trading posts in St. Petersburg, the network was vast.

At the time of the Hanseatic League’s dominance in Reval, the territory of Northern Estonia was first under the influence of the Danish Crown—in fact, the town of Reval was founded during this era. Reval eventually took the name of Tallinn, reflecting its Danish roots (“Taani” meaning “Danish” and “linn” meaning “town” in the Estonian language). Northern Estonia later became part of the Livonian Confederation and remained so until 1558 and the start of the Livonian wars, when the order ceased to exist. The bishop of Osek-Wiel and Courland, then the dominant authority in the territory, sold his land holdings in Estonia, which included the island of Sareema, to the Danish king in 1559, bringing part of the Estonian territory back to the Danish Crown. Up until eventual independence as a republic in 1920, Estonia would revert back and forth from Sweden to Russia. At the outbreak of the Second World War, Estonia was once again annexed by Germany in 1940, then the USSR in 1944, and did not re-establish independence until 1991. In 2018, the Baltic nation, along with Latvia and Lithuania, will celebrate their centennial anniversaries of declared independence.  ❑