The Bank of Sierra Leone has authorized (13th April) the issue of two new coins in their present series highlighting the plight of some of the endangered primates within the country and region. Many primate species are now in danger of extinction, primarily caused by deforestation and hunting. Many of these primates remain a constant fascination to people across the world. Struck by the Pobjoy Mint in the United Kingdom, the obverse designs feature two species of primate. 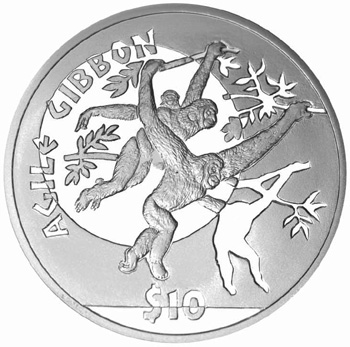 The Agile Gibbon, like all gibbons, is tailless. They predominantly live in rain forests and very rarely venture to the ground. Their long arms mean they can swing from branch to branch very quickly. 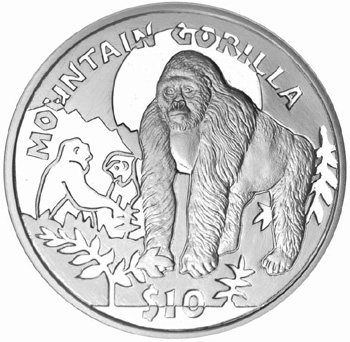 The second coin features the Mountain Gorilla. Known for being very social, they live in groups held together by long-term bonds between the males and females. Groups can vary from five to thirty with the dominant silverback as the leader. 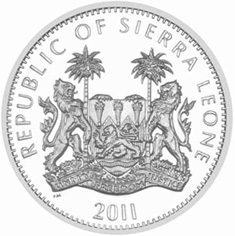 Both coins display the Coat of arms of the Republic of Sierra Leone along with the year of issue, 2011 under the main motif. Specifications for the two coins include a weight of 28.2 grams and diameter of 38.6 mm. The coins have a ten dollar denomination and are minted in sterling silver in proof quality. The coins are also available struck in cupro nickel with a face value of one dollar. These two coins are part of a series begun in 2009, four previous coins, two issued in 2009 and two in 2010 form the remainder of the set.

For more information on this and other coins offered by the coin’s distributor, the Pobjoy Mint, please visit their website at: www.pobjoy.com