The Perth Mint has released the latest coin within the popular Australian Antarctic Territory Series. Struck from one troy ounce of 99.9% pure silver, the coin features the Emperor Penguin.

The Emperor Penguin is the tallest and heaviest of all surviving penguin species living in Antarctica. This flightless bird is recognized by its black head and dorsal side, white belly, and yellow markings on its breast and ears. The species is best known for the sequence of journeys the adults take each year in order to mate and to feed their offspring. During the Antarctic winter, the adults trek 50 to 120 kilometers over the ice to breeding colonies. The female lays a single egg, which is incubated by the male, while the female returns to the sea to feed. Both parents take turns foraging at sea and caring for their chick in the colony. 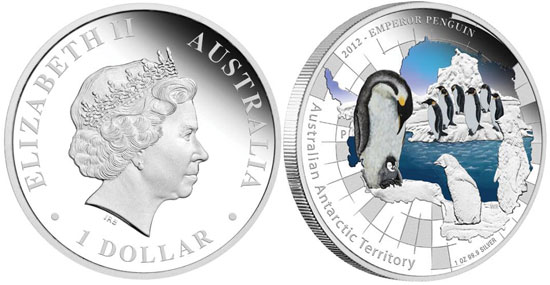 The reverse design of the coin features a mature Emperor Penguin with its chick and a colony of penguins in color. The scene is framed within the outline of the Antarctic continent. Inscriptions read “2012 Emperor Penguin”, “Australian Antarctic Territory”, and “1 oz 99.9 Silver”. The designer of the reverse is Wade Robinson.

The obverse of the coin features the Ian Rank-Broadley effigy of Queen Elizabeth II. Inscriptions include “Elizabeth II”, “Australia”, and “1 Dollar”.

Each coin is  housed in a presentation case with illustrated shipper and numbered certificate of authenticity. The mintage is limited to 7,500 coins and an ordering limit of one per member will be imposed until July 5, 2012.