The United States Mint has released the latest issue in the First Spouse Gold Coin Program. Sales of the 24 karat gold coin and bronze medal featuring Eliza Johnson began on May 5, 2011. 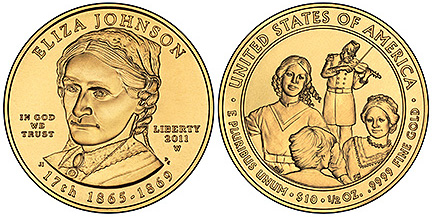 The obverse design features a portrait of the spouse of the 17th President. The likeness was designed by Joel Iskowitz and sculpted by Don Everhart. The reverse design depicts three children dancing and a Marine band fiddler playing. The scene is from the children’s ball organized by Eliza Johnson for her husband’s 60th birthday. The reverse was designed by Gary Whitley and sculpted by Phebe Hemphill.

Struck at the West Point Mint, each coin contains one-half ounce of 24 karat gold. This is the eighteenth overall release in the ongoing series honoring the Nation’s First Spouses. Coins have been released since 2007, recognizing four Presidencies per year.

The US Mint offers the gold coins in both proof and uncirculated versions. The maximum mintage has been established at 15,000 pieces, across both versions. 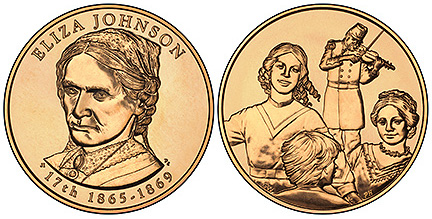 Bronze medals with a diameter of 1-5/16 inch and bearing the same design have also been released. These are priced at $7.95 each. The medal will also be incorporated into a four bronze medal set including each of the First Spouse Medals issued for 2011. This set is scheduled to be released on December 1, 2011.

The next issue of the First Spouse Gold Coin series featuring Julia Grant is currently scheduled to be released on June 2, 2011.