El Yunque National Forest, located in northeaster Puerto Rico, was previously called Luquillo National Forest, and the Caribbean National Forest, and is the only tropical rain forest in the United States. It was originally set aside by Spain’s King Alfonso XII in 1876. Its 240 inches of annual rainfall create a lush environment for plants and animals to flourish, including over a dozen different species of the Coqui tree frog, which is approximately the size of the quarter dollar coin. 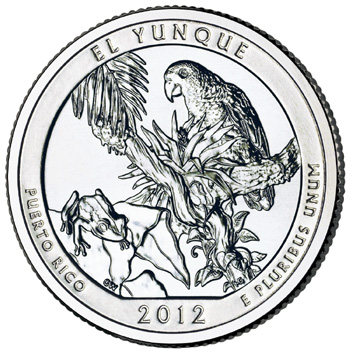 The El Yunque National Forest Quarter depicts a Coqui tree frog and a Puerto Rican parrot. Also included in the design are the incused phrases “El Yunque”, “Puerto Rico”, and “E Pluribus Unum”, as well as the date of issue. The coin will represent the first issue of the United States Mint’s America the Beautiful Quarters Program for 2012, and the eleventh issue of the series overall.

The Federal Reserve Banks have published a circulation release date of January 23, 2012 for the El Yunque Quarter. The United States Mint has indicated a sales starting date of February 3, 2012 for circulating quality El Yunque Quarters within bags and rolls. An official launch ceremony has not yet been announced.

Throughout the year, the El Yunque National Forest Quarter will be available from the U.S. Mint in the following products: