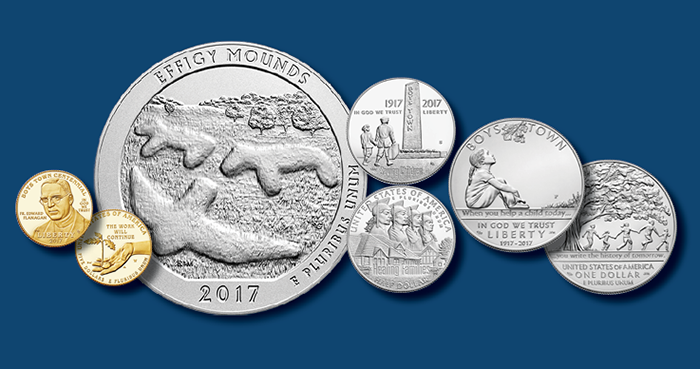 Although the Mint has just two product-release dates this week, the fact that one of those dates is for the coins in the Boys Town Centennial program means that—counting all design and denominations, and both finishes—eight new products will be hitting the market.

The first of these will be released tomorrow, March 7: the year’s first 5-ounce America the Beautiful Uncirculated silver coin (17AJ, $149.95). The design, which is the 36th in the ATB series and honors Iowa’s Effigy Mounds National Monument, has made three prior appearances on the Mint’s 2017 calendar—in the January 5 America the Beautiful Quarters Proof Set; in the February 6 ATB Quarters Silver Proof Set; and in the February 27 Effigy Mounds three-coin set.


On Thursday, March 9, the Boys Town Centennial commemorative coins will be released. Introductory pricing (which lasts for one month) has been established for the clad and silver coins, as follows:

In other news, the Mint has updated its online catalog to include the month of April, whose product releases will be as follows:

The highly anticipated 2017 American Liberty gold coin, like all gold coins from the Mint, will remain without a price tag until a few days before its release date. The Mint has published the pricing grid for the coin, based on the weekly average gold price (according to the London Bullion Market Association):