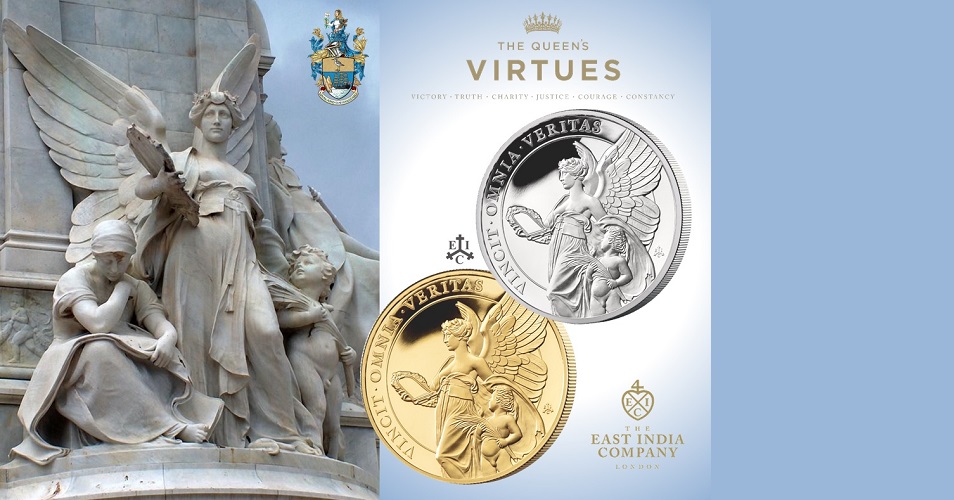 The East India Company Bullion Ltd., in association with the government of St. Helena, are pleased to announce the second release which is part of the series of collector coins entitled “The Queen’s Virtues Collection.” As with the first release, the second coin includes one-ounce gold and one-ounce silver Proof-quality pieces. When completed, the series will comprise a beautiful collection of six designs that represents the virtues in all our lives that remain as important as ever, especially during challenging times. The collection is inspired by the “Virtues of a Queen” and was launched in honour of the 95th Birthday of HM Queen Elizabeth II, which she celebrated on the 21st April.

Eagerly anticipated after the very successful release of the first coin in the series, the second coins’ design focuses on Truth and the deep meaning it holds for us all. In our modern world, many of us aspire to learn, hear, and follow the truth in all aspects of our lives. However, truth is of paramount importance, especially in our leaders and from those who are held up to a greater standard. Queen Elizabeth II has embodied this virtue more than most, where truth has become an integral part of her reign from the day she ascended the throne. In fact, The Queen’s own Coronation crown issued in 1953 bears an edge inscription that reads “FAITH AND TRUTH I WILL BEAR UNTO YOU.” A vow made nearly 70 years ago and one which has remained close to her heart.

The second coin highlighting Truth is represented with an exceptional design created by acclaimed artist Elles Kloosterman. Her reverse illustrations are fittingly based on the acclaimed Victoria Memorial situated outside Buckingham Palace. The latest coins are dated 2021 and feature a beautiful allegorical interpretation of Truth as a glad-winged figure. She symbolically holds up a mirror to Nature, standing with a child bearing a palm branch. Above the design along the edge is the Latin inscription VINCIT VERITAS OMNIA (“Truth conquers all”). The distinctive privy mark of the East India Company is placed to the lower-right, a mark of quality which is applied to all East India Company’s modern coinage.

The obverse side includes the Commonwealth effigy of HM Queen Elizabeth II created by engraver Jody Clark and introduced onto the coinage of St. Helena in 2019. The issuing authority ST HELENA is included in the legend surrounding the Queen’s likeness with the denomination included below.

Available to pre-order from the 28th April 2021, each encapsulated coin is presented in a custom case and accompanied by a numbered certificate of authenticity and information booklet. For additional information about these coins and other coins available from the East India Company and government of St. Helena, please visit the East India Company — Coins homepage. Despatch will commence from the 15th May.