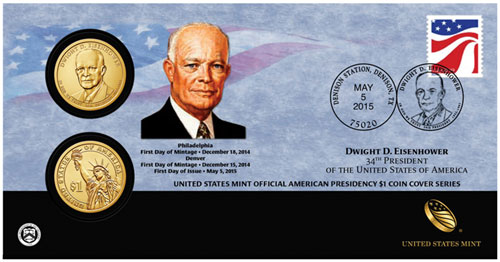 The Dwight D. Eisenhower Presidential Dollar Coin Cover contains two $1 coins bearing the President’s portrait which are sourced from the first day of production at the Philadelphia and Denver Mint facilities. The coins were first struck in Philadelphia on December 18, 2014 and first struck in Denver on December 14, 2014. The two coins are mounted on a display card and placed within an illustrated envelope.

A Red, White, and Blue Forever postage stamp is placed on the envelope and postmarked May 5, 2015, Denison Station, TX. This represents the day that the cover was first issued by the United States Mint and the location of the Eisenhower Birthplace State Historical Park.

The covers are priced at $19.95 plus applicable shipping and handling. The United States Mint has specified a production limit of 15,000 covers. There are no household ordering limits imposed.