The prize piece of the Künker summer auctions, which took place from June 18th – 22nd in Osnabrück, was without a doubt the 1803 ducat of Prussian King Frederick Wilhelm III. The rare specimen was made from the gold of the Fürstenzeche mine near the Upper Frankish town of Goldkronach. It’s the sole specimen currently in trade, with another one held in the national numismatic collection of the Bode Museum in Berlin. Estimated at 75,000 EUR, the piece reached a hammer-price of 160,000 EUR. Figure in the buyer’s fee and VAT, and the collector paid almost 200,000 EUR for it.

This final price was the high point of the week long auction at the Steigenberger Hotel that began on June 18th and started off with the second part of a collection of Ottoman coins. This collection again contained a number of rarities with some rather remarkable final sale prices. As an example, a new beshlik 1223 H. from the Qustantînîya Mint (Constantinople / Istanbul) estimated at 2,000 EUR went for 7,500 EUR. Of particular note in the next catalogue 211 (Medieval – Modern Times) was the brass pattern of the 1897 Chinese dollar (Anhwei Province) – an FDC silver-plated unique one-off that had been estimated at 5,000 EUR. It ultimately sold for 145,000 EUR! This realized price was met with such loud, vocal fanfare and disbelief that it was almost impossible to make out the sale price that immediately followed– a very respectable 46,000 EUR, mind you – for an 1897 mace pattern (Sin Kiang Province / Sungarai) which had also been estimated at 5,000 EUR.

Other collection areas also brought in substantial realized prices, all of which can be viewed at www.kuenker.de. An example from the USA: a 1797 large copper cent from the Philadelphia mint was listed at 250 EUR in the catalogue, but went to its new owner for a much more substantial 15,000 EUR. A particularly attractive undated guldiner (after 1511) of Emperor Maximilian I was sold for 20,000 EUR, 5,000 more than its estimate. The 1624 imperial thaler of the Olomouc Archbishop Franz von Dietrichstein rose in price sevenfold, and was ultimately bought for 7,000 EUR.

Medals and paper money once again covered the wide spectrum always offered in Osnabrück. Find here just one example. A 1681 silver medal dedicated to the Hamburg cloth merchant Wilhelm Stadtländer was appraised at 200 EUR. Collectors finally agreed on a hammer-price of 2,400 EUR. Paper money also featured in the collection of the princes of Solms-Hohensolms-Lich: several gulden notes from the middle of the 19th century went for final prices of between 1,200 and 2,200 EUR. The over 300 items from the Solms catalogue ranged from 22 EUR (half batz 1588, estimate 20 EUR) to 34,000 EUR (convention thaler 1770, estimate 4,000 EUR). The catalogue of the important Hessian noble house is much more than just an auction catalogue – Künker has once again produced a well-done and informative citation work. The catalogue includes many rarities, such as an imperial thaler klippe from 1616 from Lich. The unique item, estimated at 2,500 EUR, reached a final price of 10,500 EUR.

Catalogue 214 contained gold coins as well as the section with Russian coins and medals. The highlight of the gold stampings was a Brazilian 12,800 reis coin from 1732. With a countermark from Martinique, it belongs both to the island and to the “unpublished” category. The unique piece didn’t stand firm on its estimate of 15,000 EUR, but instead sold for 26,000 EUR. A decorative case from the time of French king Louis XVIII (1814-1824) with three medals in gold, silver and copper of the Battle of Malaga fetched 31,000 EUR (estimate: 15,000 EUR). A 1765 ducat of the Habsburg Joseph II went for 3,000 EUR, tripling its estimate. A portugaleser of 10 ducats from the second half of the 17th century to the Hamburg Mayor Johan Schulte doubled its estimate, reaching a hammer-price of 24,000 EUR.

There were also surprises to be had among the Russian items. An Elizabeth St. Petersburg ruble from 1757 with its portrait of J. Dassier just barely doubled its estimate – selling for 97,500 EUR. A family ruble (with a value of 1 ½ rubles or 10 zlotych) of Czar Nicholas from 1836/1837 went far beyond its estimate of 25,000 EUR; the attractive, patinized specimen ultimately went for a bid of 44,000 EUR. A ruble from Alexander III from 1886 went for many times its estimate of 1,000, selling for 8,500 EUR. 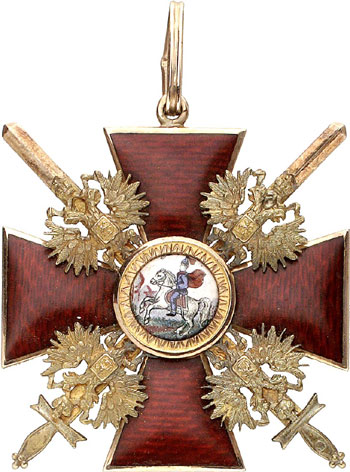 Once again, the Künker House put forward a remarkable catalogue of orders and decorations this summer. They came up for bidding on the last of the five days of auctions. The most expensive object, an order set from the imperial order of the holy Russian prince Alexander Newsky, cost a tidy 120,000 EUR instead of its estimated 35,000 EUR. A “Berliner Eisen,” a commemorative cross to the 1815 Victory at Waterloo / Belle Alliance left the stage with 360 EUR (estimate 250 Euro). Orders, much like coins, come with their own history – this is what makes collecting so exciting. Catalogue author Michael Autengruber impressed during his lecture by telling about the history around Napoleon’s missing orders. They were captured in 1815 at Belle Alliance, then found their way into the possession of the Prussian museum, only to end up vanishing completely on their way to Russia in 1945. This two-time war loot was lost without a trace for a long while, but then reappeared much later on. It was even on display in Paris this summer.

All in all, Auction House Künker sold over 6,500 numbers and only 266 lots went into post-auction sale. The overall estimate of about 7 million EUR was surpassed by approximately 4 million EUR. According to the results, it seems safe to say that coins and orders are still selling very well. The increases for Russia, China and gold had dealers exclaiming to one another “the silver is a real draw!” Whether this holds true will really become apparent on October 8, when Künker’s fall auctions begin. In addition to the usual date at the beginning of October, the house has also scheduled two more auctions at the end of October: the Künker rarities auction takes place from October 30-31, in Osnabrück as usual.